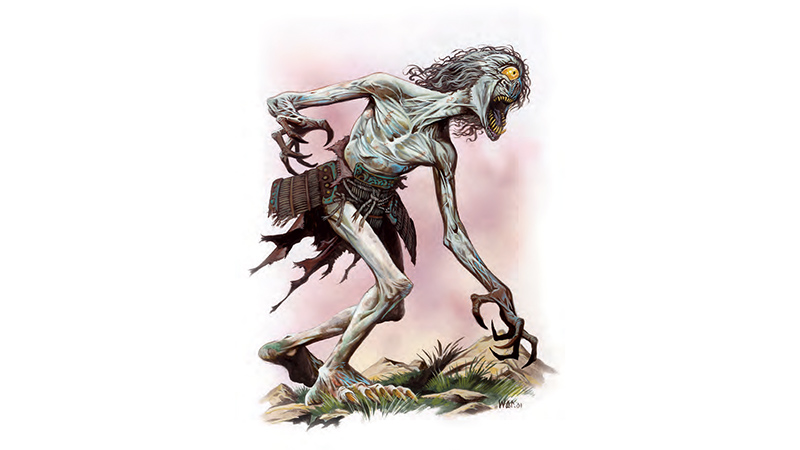 These bony, one-eyed ghouls spread a hideous curse with their unclean claws, causing their victims to transform into mindless savages at night.

Not noted for their intelligence, tigbanua busos make crude attacks by leaping at lone travelers and helpless villagers under the cloak of night. Though hardly brave, they are extremely ferocious and attack whenever the opportunity presents itself.

Fear Aura. Any creature other than a tigbanua buso that starts its turn within 10 feet of the buso must succeed on a DC 9 Wisdom saving throw or become frightened for 1 minute. The creature can repeat this saving throw at the end of each of its turns, ending the effect on itself with a success. On a successful saving throw, the creature is immune to the Fear Aura of all tigbanua busos for 24 hours.

Multiattack. The buso makes three attacks: two with its claws and one with its bite.

Claw. Melee Weapon Attack: +4 to hit, reach 5 ft., one target. Hit: 5 (1d6 + 3) slashing damage. If the target is a creature, it must succeed on a DC 10 Constitution saving throw or be cursed with the tagamaling curse.

A humanoid creature can be afflicted with the tagamaling curse after being wounded by a tigbanua buso. Each night, there is a cumulative 1% chance (1% the first night, 2% the second night, 3% the third night, and so on) that a cursed creature undergoes a horrible transformation that lasts the duration of the night. A transformed victim becomes a tagamaling buso: its feet become long and bony, its eyeballs fuse together into a single red or yellow eye, its hands sprout sharp claws, and its teeth enlarge into horrible fangs. The tagmaling buso’s Intelligence score becomes 2 for the duration of the transformation, and the creature attacks every creature it sees.

In tagamaling form, a creature can only attack with its claws and bite like a tigbanua buso. A Medium or Small tagamaling’s claws deal 1d4 points of slashing damage plus any Strength or Dexterity modifier and its bite deals 1d3 points of piercing damage.

When dawn arrives, the transformed victim returns to its natural form and retains no memory of any actions committed during the night. The creature takes 2 levels of exhaustion to a maximum of 4. A remove curse spell can rid an afflicted creature of the curse. However, when the chance of transformation reaches 100% (after 100 days), the victim can no longer be cured by any means short of a wish or miracle.

A tagamaling buso‘s statistics are the same as the tigbanua ghoul’s except it does not have the Fear Aura trait and does not cause the tagamaling curse.