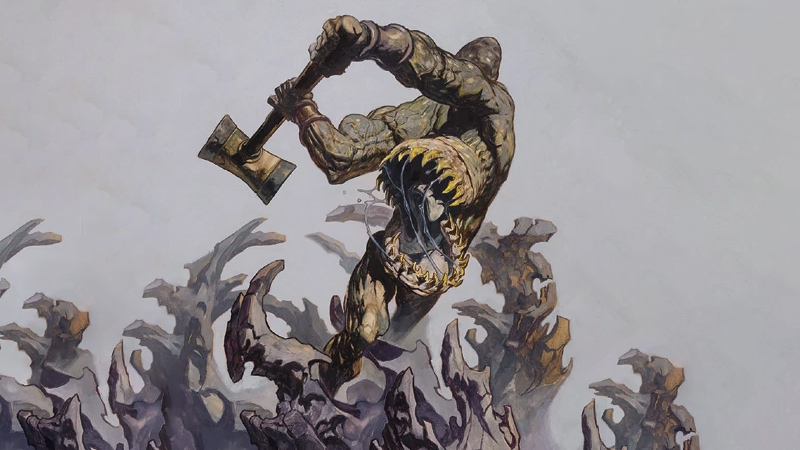 Tomb Tappers, also known as thaalud, appear as tall, naked, sexless, and hairless humanoids with very hard, smooth, blue-gray skin, claws that can dig through solid rock, and great toothed mouths in their bellies. Their smooth, featureless heads have earned them the nickname “the faceless”.

Tomb tappers get their name from their habit of burrowing up from the depths to plunder tombs, temples, and wizards’ towers in search of magical items, which they carry off. They usually try to seize magical items from encountered beings.

Magic is sacred to thaalud; they never use any magical items, but protect and venerate them. Tappers spend their long lives in an eternal search for the source of all magic, which they believe lies hidden somewhere deep in the earth. They are somewhat in awe of earth elementals, believing them to be created at this mysterious source, and are reluctant to attack them.

Tomb tappers are not natural creatures. Their existence has been traced back to the very beginning of the Shadowed Age of Netheril when a group of powerful wizards created them to seek out the source of the drain on magic that was beginning to reach across Netheril. This is supported by their faceless heads (suggesting they have been changed from a humanoid norm) and by their spell immunities (suggesting they were created to fight the phaerimm). Tapper beliefs indicate they know magic has power over them. Some, including Elminster, think thaalud were originally made from rock animated in human form. This view is supported by their turning to stone at death.

Thaalud skin varies in porosity at will; through it, tappers take in needed water. Their gigantic jaws can crush rock, from which thaalud extract mineral sustenance. They also digest iron from blood and bone marrow if such become available but do not hunt to eat.

Thaalud customarily wield great hammers of arenite, an alloy derived from magma (the exact composition is secret). These hammers are 10 feet or more long, heavy, harder than most rock, and very durable. Tappers can dig through rock with their claws, but use their hammers to split rock when a smooth surface is desired.

Thaalud are naturally long-lived and form regional clans. It is not known whether they have young or give birth; no children or pregnant thaalud have ever been seen. Even who leads a clan is not known, although thaalud make and keep deals with other beings, and hence are assumed to respect rules and authority.

Thaalud will aid svirfneblins and dwarves, whose magic they leave unmolested. They have no interest in drow cloaks, boots and other items that resemble magic because of Underdark radiation and not true dweomers. Thaalud hate umber hulks, sometimes enslaving them from birth, mutually ignore xorn, dislike duergar and drow, and are bitter foes of illithids and phaerimm, who have slain more than a few thaalud.

Echolocation. The tomb tapper can’t use its blindsight while deafened.

Jumping Bite. After the tomb tapper makes a bite attack, regardless of whether or not the attack dealt damage, the tomb tapper does not provoke attacks of opportunity when it moves out of an enemy’s reach and it can not make any more attacks for the remainder of its turn.

Keen Hearing. The tomb tapper has advantage on Wisdom (Perception) checks that rely on hearing.

Multiattack. The tomb tapper makes three attacks: two with its claws and one with its bite.

Animate Stone (1/day). The tomb tapper magically animates nonmagical stone it can see within 60 feet of it. Animated stone has statistics like those of an earth elemental, except it has Intelligence 1 and Charisma 1, it can’t be charmed or frightened, and it can’t speak. The animated stone creature remains animated as long as the tomb tapper maintains concentration, up to 1 minute (as if concentrating on a spell).

The tomb tapper will probably be introduced in my campaign pretty soon. As weird as they are, they’re kinda cool, and they definitely have that “wtf?” element that I love to thrust upon my players.

For more details about the thaalud, be sure to check out the second edition Monstrous Manual which you can get on dmsuild.com.