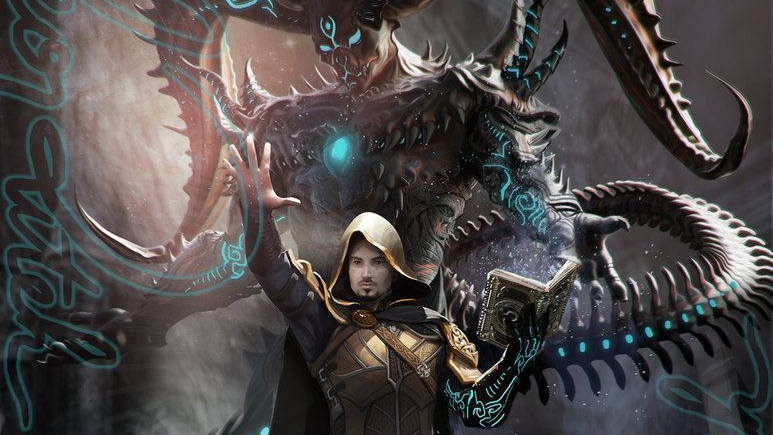 This entry is a BONUS entry for the Dungeon.Dude Promotional Campaign on Instagram. Together, the Instagram D&D Community helped Dungeon.Dude, a hard-working artist, get over 2,100 followers! Outstanding job, folks!

If you’d like to see the first three, check out:

This request comes from one of my patrons. Here is what he wrote:

I was hoping you could make a cleric subclass for demons, something that embraces evil.

Sounds good to me! Unlike previous editions, I don’t think we’ve seen alignment-based divine domains yet, at least not in an official capacity.

What’s interesting is that he mentioned it being for demons. Therefore, I want to create a subdomain that helps bolster demon powers. I’ve also looped in some of the spells from Xanathar’s to really give it some cool flavor.

What I thought would be neat would be creating sub-sub-domains a la the totem and storm herald barbarians or the circle of land druids. You pick a type of demon and then you gain powers based on the demon type you pick. The three I thought would work best were the three top demon types, mariliths, balors, and nalfeshnee Why these three? Because they’re all usable in the SRD 5e, of course!

Admittedly,  it was tricky balancing the demon-like powers while keeping with the flavor of the relevant monsters but I think I did a pretty good job. Demon domain is designed as a close-and-personal martial domain, likely selected by players who favor melee over ranged. At 1st level, all three powers are limited by Wisdom modifiers and each allows for a different sort of combatant. In addition, demon domain clerics get melee-happy proficiencies. And their domain spells are organized to assist them in one-on-one combat. Note: I don’t normally include Xan spells in builds, but a demon cleric that can’t summon demons seems dumb. However, for those who don’t have or wish to use Xan’s, there are spell substitution suggestions.

I really enjoy the 2nd level summoning power and I realize this might cause some controversy since at first glance it might seem a little OP. I based it on an old Daredevil comic where Dr. Strange summons Mephisto to ask him questions while the demon is bound and blinded with Dr. Strange’s magic. While the spell may seem somewhat similar to contact other plane and other augury-type spells, it’s a bit weaker in a number of ways. First, the creature is at most a balor and not a demi-god (though, one could argue that balors are nearly as powerful as demi-gods). And while the demon may be affected by zone of truth spell, it does not have to answer questions if it does not wish to (as per the zone of truth description). If anything, this power makes for some nifty roleplaying opportunities.

At 6th, the cleric picks up the standard resistance to fire and poison and are immune to the poisoned condition which shouldn’t break things too much (it’s close enough to what forge domain gets and I don’t feel poisoned immunities break things too much since it’s so rare it comes into play unless the characters happen to be fighting nothing but yuan-ti for weeks on end). It’s kinda blah, but hey, it’s necessary, especially with all the fire going around.

8th level, of course, is Divine Strike with fire.

And 17th is where things get really interesting. The balor exemplar clerics pick up a flaming whip which gives them additional d8 of fire damage and lets them “GET OVER HERE!!!” a bad guy into its flame aura, which is a nifty combo. Marilith clerics pick up an extra reaction each turn; since it has at the minimum hellish rebuke, its parry ability, and attacks of opportunity, this is pretty useful for it. And nalfeshnees get access to the horror nimbus effect which is especially effective against good creatures.

Oh, and I through in an evil restriction because the idea of a lawful good person calling upon the power of a balor is just dumb. But hey, it’s your game. Do what you like!

At 1st level, a cleric gains the Divine Domain feature. The following Demon Domain option is available to a cleric, in addition to those normally offered.

The gods of demons–who may even be greater demons themselves–infect the world with their gruesome misery and torturous thoughts. Only the most depraved evil gods can claim influence over the demon domain as the fundamental chaos it thrives upon is difficult to control.

Vile darkness surrounds demon clerics, the chosen avatars of malicious, evil gods. They are gifted demonic powers from their malevolent gods, which they use to wreak havoc on the good and just.

Your GM can lift this restriction to better suit the campaign.

You gain domain spells at the cleric levels listed in the Demon Domain Spells table. See the Divine Domain class feature for how domain spells work.

* These spells appear in Xanathar’s Guide to Everything. At your option, you may replace summon lesser demons with vampiric touch and summon greater demon with fire shield.

When you choose this domain at 1st level, you learn the Abyssal language and you gain proficiency with martial weapons and heavy armor.

At 1st level, when you select this domain, choose an exemplar of evil and gain its feature. At your option, you also gain minor physical attributes that are reminiscent of your exemplar. For example, if you have a balor as your exemplar, you might have reddish skin and small horns, or if you exemplar is a nalfeshnee you may take on porcine features.

Marilith. You possess the quick reflexes of a marilith. As a reaction, you can add 2 to your AC against one melee attack that would hit you. To do so, you must see the attacker and be wielding a melee weapon.

Nalfeshnee. Your demonic exemplar imbues within you abyssal savagery. When you hit a creature with a melee weapon attack, you can add double your Strength modifier to the damage roll instead of your normal ability modifier.

Starting at 2nd level, you can use your Channel Divinity to summon and bind a powerful demon in order to gain information from it.

Using freshly drawn blood from a beast or humanoid, you draw a 15-foot diameter circle on the ground surrounded by 5 lit, black candles. You then conduct an hour-long ritual, invoking the name of a powerful demon which must be a balor, marilith, or nalfeshnee. The demon appears within the circle and cannot leave it. While within the circle, the demon is blinded, incapacitated, and restrained and is under the effects of a zone of truth spell (it automatically fails its saving throw). Nothing–not physical objects, energy, or other spell effects–can pass through the circle, in or out, though the demon can still breathe in there. While within the circle, the demon is immune to all damage.  Any creature that attempts to attack or touch the demon or disturb the circle in any way takes 4d6 psychic damage and the demon immediately disappears. Otherwise, the demon disappears after 1 minute or until you use your action to dismiss it.

Starting at 6th level, your connection to your demonic god grants you special abilities:

At 8th level, you gain the ability to infuse your weapon strikes with divine energy. Once on each of your turns, when you hit a creature with a weapon attack, you can cause the attack to deal an extra 1d8 fire damage to the target. When you reach 14th level, the extra damage increases to 2d8.

At 17th level, you gain a magical benefit based on the Exemplar of Evil of your choice. You can choose the same demon you selected at 1st level or a different one.

Balor. You can use your action to create a flaming whip in your empty hand. You are proficient with it while you wield it. The whip counts as magical for the purpose of overcoming resistance and immunity to nonmagical attacks and damage.

Your flaming whip is a melee weapon with a 15-foot reach and finesse. On a successful hit, the whip deals 1d8 slashing damage plus 1d8 fire damage (in addition to the 2d8 fire damage from your Divine Strike feature) plus your ability modifier used for the attack roll and the target must succeed on a Strength saving throw versus your spell save DC or be pulled up to 10 feet towards you.

Your whip disappears if it is more than 5 feet from you for 1 minute or more. It also disappears if you use this feature again, if you dismiss the weapon (no action required), or if you die.

Marilith. You can take two reactions on every  round in combat.

Nalfeshnee. You can use your action to emit a horror nimbus, which appears as scintillating, multicolored light. Each creature of your choice within 15 feet of you that can see the light must succeed on a Wisdom saving throw against your spell save DC or be frightened for 1 minute.  A creature can repeat the saving throw on itself ending the effect on itself with a success. Good-aligned creatures make their saving throws with disadvantage. If a creature’s saving throw is successful or the effect ends for it, the creature is immune to your horror nimbus for the next 24 hours.

Available in PDF form on Patreon

This particular subclass will only be available in PDF form on the Patreon version of the final document (probably sometime around January 14th, 2019). In addition to PDFs copies of the material found on this site, you get to put in monthly requests.

Next: Druid Circle of Blight (for real this time)

Art by Ekoputeh on Deviant Art and Marvel comics.