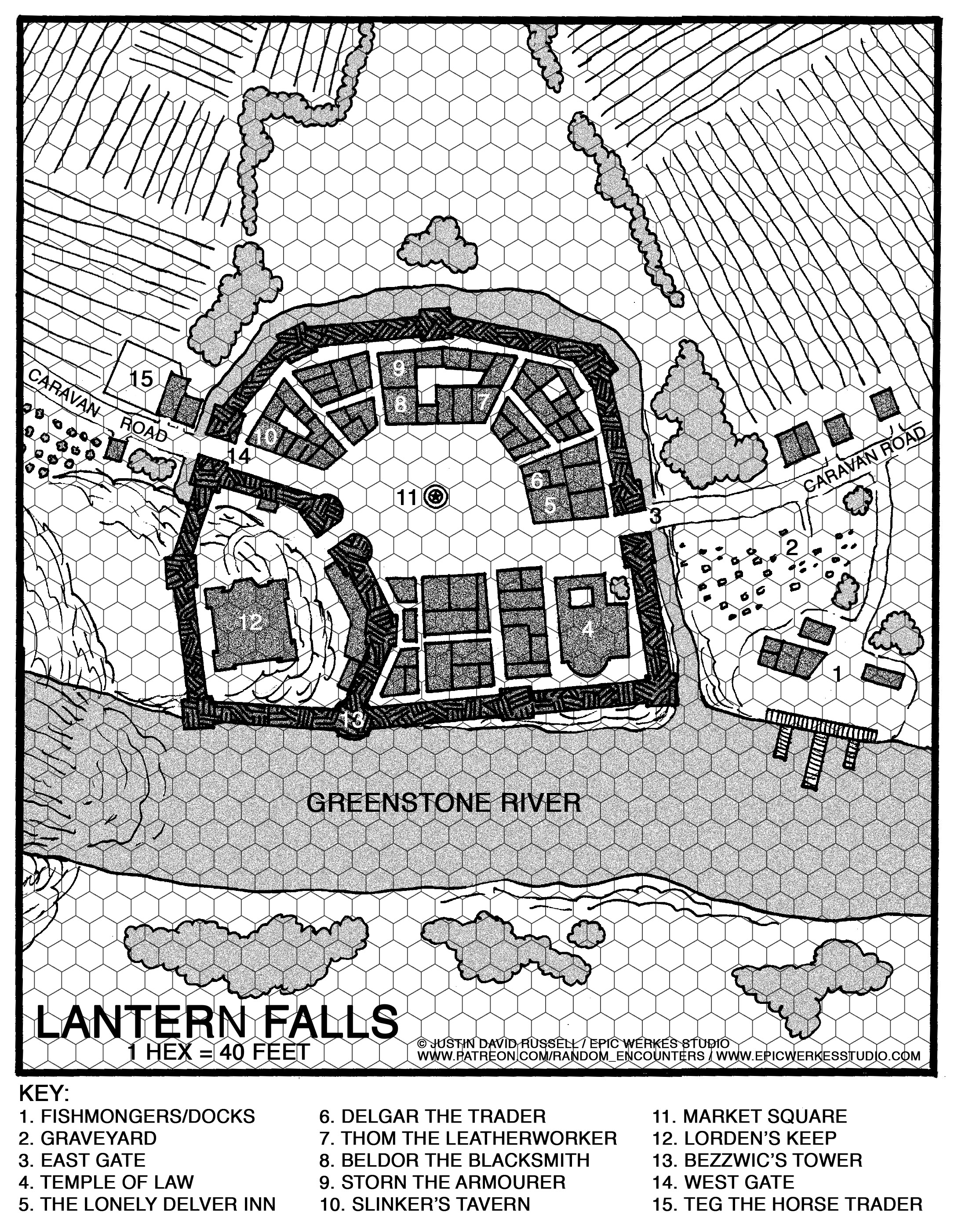 The Goblin Mine adventure assumes that the players have already arrived in Lantern Falls. However, any small-to-medium settlement near a major mountain range will do.

The characters are called to the town of Lantern Falls by Bezzwic Greencloak (LG male human mage). Recently, a group of Greencloak’s students disappeared while performing research north of the Greenstone River, in the Graywood Forest. Rangers combing the area discovered goblin tracks leading back to the Forsaken Peak. Greencloak fears that none of his disciples survived, but remains optimistic. He hopes that the characters can either a) find proof that his students were all killed in the raid or b) rescue any survivors captured by the Peak’s goblins.

Greencloak knows that the goblins operate out of a mine located on the northern face of the mountain and offers detailed directions for the characters.

Greencloak is the town’s most extraordinary feature. He is the Steward’s counselor and a wizard of middling power. He lives in a tower near the Keep. Bezzwic is proud, forgetful, and quick to please the Steward with simple cantrips and stories. The wizard is venerable, but not ancient. He is tall, with meaty hands and a wide girth. His greying black hair and beard are wild about his face and protrude from his voluminous green cloak. Bezzwic thoroughly enjoys scaring the town youth with threats of true and awesome power. He does not brook fools but will bend over backward for the Steward of Lantern Falls.

If the characters ask more questions to Greencloak, he shares what he knows about The Forsaken Peak and the goblins:

The characters should be somewhat experienced by this point and their deeds may be known even to those living on the edge of civilization, such as those of Lantern Falls. Greencloak is confident in the party’s ability to rescue his students. Greencloak explains that he would offer his support, but the town’s defenses are limited, especially where magic is concerned.

Greencloak promises the characters 300 gp apiece if they return with irrefutable evidence that his students were killed by the goblins. He will pay an additional 200 gp each if they find survivors and bring them back alive.

If the character press for coin upfront, Greencloak gives each character 100 gp upfront, with the remainder distributed upon completion of the mission.

Lantern Falls is an independent mining town sandwiched between the Central Borderlands to the west, the very northwestern edge of the Towering Mountains to the east, the elven woods to the south, and the barbarians and Kingdom of Chaos to the north. It’s a sleepy town comprised of hard-working farmers, craftsmen, miners, and fishermen, though there are some merchants and traders that operate within the town walls. A large waterfall thunders down several cataracts to the north of the settlement.

Those few caravans that end up in Lantern Falls arrive in the summer months when the passes and Borderlands are free of harsh weather. The most common traders include merchants from the Valley of Haven in the mountains to the east, or free farmers from the Ancient Hills and lands immediately surrounding the town.

Historically, the town was a simple village comprised only of miners. But as harsh northern weather began taking its toll, marauding barbarians and monsters harried the miners, and passing caravans of merchants and guardsmen wintering with the laborers eventually became farmers, it became clear that more protection was necessary. Walls were slowly built. Mercenaries were paid to watch the town and protect its inhabitants. These soldiers became the town’s first men-at-arms. Eventually, one of these men, Durwin, took power, focusing construction and military efforts for the first time for the beleaguered inhabitants.

A traveling cleric of Law settled in the town 100 years afterward, bringing with him spiritual guidance and offering his god’s protection to travelers heading east or west.

Soon, Lantern Falls, or Iron Falls, as it was called until 70 years ago, became known as the ‘Merchant’s Lantern.’ It offered those few travelers that made the harrowing journey through the Borderlands or the Towering Mountains a safe haven from the hazardous northern realms. Though trade is still not bustling, commerce is greater now than it has previously been.

Lantern Falls’s denizens are mostly lawful. Laws and punishments are strict but fair, and rarely resulting in execution.

Lantern Falls as a Base of Operations

Lantern Falls makes an excellent place for the party to rest and relax in between adventures, especially as part of the ongoing Forsaken Peak adventure series. All of the equipment listed in the Fifth Edition PHB are available for purchase in Lantern Falls. Being a Sword and Sorcery setting, magic items are much more difficult to locate. In addition, Lantern Falls makes a good place to introduce side quests and other plot developments.

Below are details of some of the more important places found in the town, as well as its notable denizens.

The Lonely Delver Inn is one of the oldest establishments in Lantern Falls. Its current innkeeper is Forthwind (LN male human commoner), an argumentative and somewhat harsh man. Miners visiting from the camp to the north are treated exceptionally well by Forthwind, often given discounts on their meals, if not given them for free. The miners fill the common room’s tables where they carouse away the aches and pains brought on by backbreaking labor. Many only visit when delivering shipments of ore, though some visit family and friends they have in town. The cost to stay the night at the Lonely Delver is 1 gp per day and includes three modest meals.

If there is information to be had in Lantern Falls, it can be found in Slinker’s Tavern. The halfling, Slinker (N male halfling commoner)  makes it his business to know the gossip and rumors in town. He often likes to bother new arrivals with incessant, but kindly, conversation. Often, he is amiable enough that people end up opening up to him and saying more than they intended, which is just what Slinker wants.

Lorden, the Steward of Lantern Falls, is descended from the mercenaries that were hired to protect the developing town. Lord (LN male human veteran) is short, stout, and red-faced. He is a combative fellow that loves being involved in forays into the surrounding hills to deal with any threats that might arise. Lately, though, his wife, the Stewardess Gwendolina (LG female human noble), and Lorden’s advancing age, have kept the man upon his carven throne much more often than he would like. Lorden is prone to exploding into fits of rage, though such bouts are mostly bluster, as his wife will be quick to point out. Lorden’s son, Uthric (LN male human veteran), is his pride and joy. He is tall like his grandfather, fierce like his father, and acting constable for the town.

The Lorden family lives in the large keep on the western part of the town. There are old passages beneath the Keep, and many mysteries surrounding them.

The Temple of Law

The Temple of Law is the spiritual center of the town and a resource for those looking for divine protection along the caravan routes east and west. Fenric the Pure (LG male human priest) is the town’s priest is a stick of a man, with a head that bobs around on his bony shoulders, like a scarecrow with no support, when he gets excited or angered. Many say the priest is a boring, fussy, and fastidious fellow, and they are right. Most of the temple’s acolytes and the less pious townsfolk make fun of him for his no-nonsense personality. Despite his conservatism, the man is good of heart, aids the traveling and local poor, and is quick to lend a hand when the moment calls for it, though he might try and control the whole affair. Lorden and Fenric are constantly at odds, though they hold a grudging respect for one another.

Interested in learning more? Keep up to date with what’s going on in this adventure path as well as BroadSword Magazine. The first issue debuts in Late August/Early September.

For the original map and details of Lantern Falls, check out JD Russell’s Patreon.