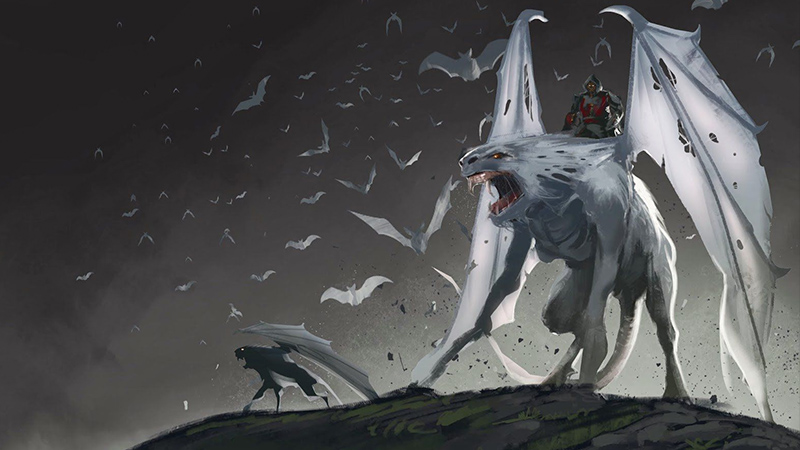 White bats are massive, subterranean creatures often used as mounts by the Blood Knights of Oelet. These beasts resemble a cross between a horse, lion, and bat, covered in thick, white fur. They are primarily nocturnal creatures and sensitive to sunlight. Mostly blind, white bats have a powerful sense of echolocation, capable of pinpointing even the smallest fly from hundreds of feet away.

The white bats that don’t live in the captivity of the Oeletians live in colonies of 50-100 bats underground and far away from sunlight. They hunt in packs, searching for larger, subterranean fauna to feed their voracious appetites. White bats are often lead by an alpha, one of the dominant females of the white bat colony.

A white bat attacks with its massive front claws and teeth, rending enemies as their mounted knights drive back more foes with lances. It’s believed that a trained Blood Knight riding a white bat is capable of toppling an ancient wyrm.

Echolocation. The bat can’t use its blindsight while deafened.

Keen Hearing. The bat has advantage on Wisdom (Perception) checks that rely on hearing.

Pounce. If the bat moves at least 20 feet straight toward a creature and then hits it with a claw attack on the same turn, that target must succeed on a DC 14 Strength saving throw or be knocked prone. If the target is prone, the bat can make one bite attack against it as a bonus action.

Sunlight Weakness. While in sunlight, the bat has disadvantage on attack rolls and Wisdom (Perception) checks that rely on sight.

Don’t forget to check out my new FREE adventure!

The first part of The Secret of Forsaken Peak is up and on the site. Check it out. It’s free, and it’s only the first part of what’s shaping up to be a 30-40 part megadungeon.

The Secret of Forsaken Peak