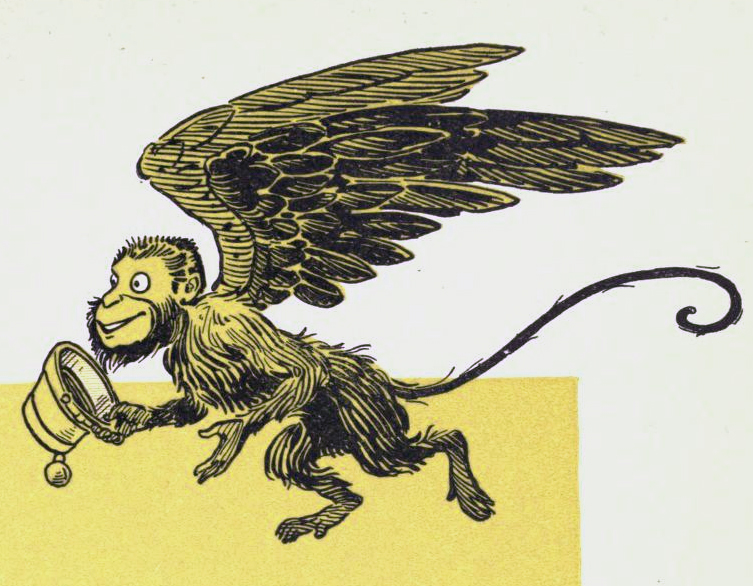 “Why do you have to obey the charm of the Golden Cap?” Dorothy asked. “That is a very long story,” answered the leader of the Winged Monkeys, with a laugh; “but as we have a long flight before us, I will pass the time by telling you about it, if you wish.” “I would very much like to hear it.” Dorothy replied.“―L. Frank Baum, The Wonderful Wizard of Oz (1900)

Once thought to be minions of the dreaded Wicked Witch of the West, the winged monkeys are chaotic creatures with a mysterious origin. They resemble larger-than-normal monkeys with long, strong arms, and powerful feathered wings on their back. Like many of the animals of Oz, they can speak. Neither good nor bad, the monkeys must obey the commands of anyone who wears the Golden Cap.

Curse of the Golden Cap

Thanks to an ancient prank pulled by the King of the Winged Monkeys, the will of the monkeys is bound to a jeweled Golden Cap. Whoever wears the cap is granted three wishes by the monkeys. When Dorothy Gale of Kansas first met the Wicked Witch of the West, the witch was in possession of the Golden Cap which she had used to enslave the Winkies. After Dorothy defeated the witch, she used the cap to return her and her companions to the Emerald City. Eventually, Glinda, the Good Witch of the South, gave the cap back to the monkeys so they could control themselves and live free.

Pack Tactics. The winged monkey has advantage on an attack roll against a creature if at least one of the monkey’s allies is within 5 feet of the creature and the ally isn’t incapacitated.

Multiattack. The winged monkey makes two attacks with its club.

Net. Ranged Weapon Attack: +4 to hit, range 5/15 ft., one Large or smaller creature. Hit: The creature is restrained until it is freed. The net has no effect on creatures that are formless or creatures that are Huge or larger. A restrained creature can use its action to make a DC 10 Strength check, freeing itself or another creature within its reach on a success. Dealing 5 flashing damage to the net (AC 10) also frees the creature without harming it, ending the effect and destroying the net.