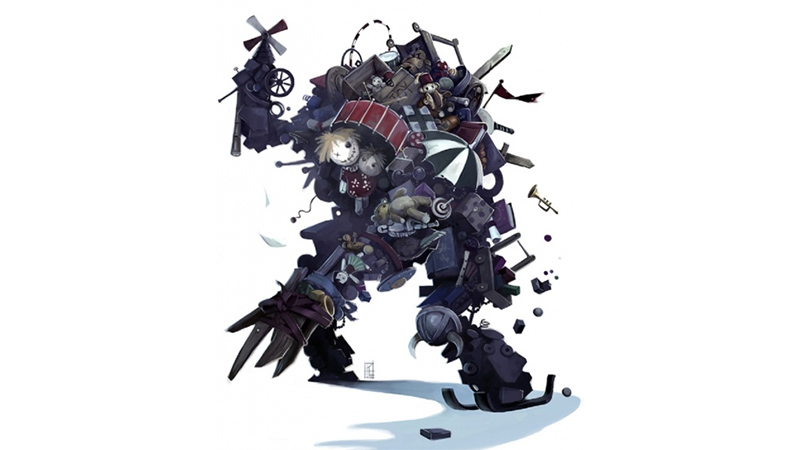 While raggamoffyns are created by magical waste and happenstance, junk golems are the result of alchemy, engineering, and a twisted sense of imagination. These constructs are often found near waste disposal sites or near battlefields where scrap material is easy to come by.

No two junk golems look the same, but they do share a few common features. Typically, they stand between 10-14 feet tall. They’re fueled by a gem at their core that binds the garbage together. And they exude a cloud of rust that instantly corrodes any nonmagical metal object it touches.

Junk golems make great guardians, certainly, but they’re typically put to task doing hard labor that its creator is incapable of doing his or herself.

Consume Junk. As a bonus action, the junk golem uses its corrosive touch to absorb a 1-foot cube’s worth of inanimate objects that are not being worn or carried it can see within 5 feet of it. The touch destroys the objects and the junk golem regains 10 hit points.

Junk Absorption.  Whenever the golem is subjected to bludgeoning, piercing, or slashing damage from nonmagical attacks not made with adamantine weapons, it takes no damage and instead regains a number of hit points equal to the damage dealt and the weapon corrodes.  The weapon takes a permanent and cumulative -1 penalty to damage rolls. If its penalty drops to -5, the weapon is destroyed. Nonmagical ammunition made of any metal other than adamantine that hits the junk golem is destroyed.

Rust Breath (Recharge 6). The golem exhales a corrosive gas in a 15-foot cone. All nonmagical ferrous metal objects in that area are destroyed. If the object is being worn or carried by a creature, the creature can make a DC 18 Dexterity saving throw to avoid the golem’s rust breath. If the object hit is either metal armor or a metal shield, it takes a permanent and cumulative -1 penalty to the AC it offers. Armor reduced to an AC of 10 or a shield that drops to a +0 bonus is destroyed. If the object touched is a held metal weapon, it rusts as described in the Junk Absorption trait.