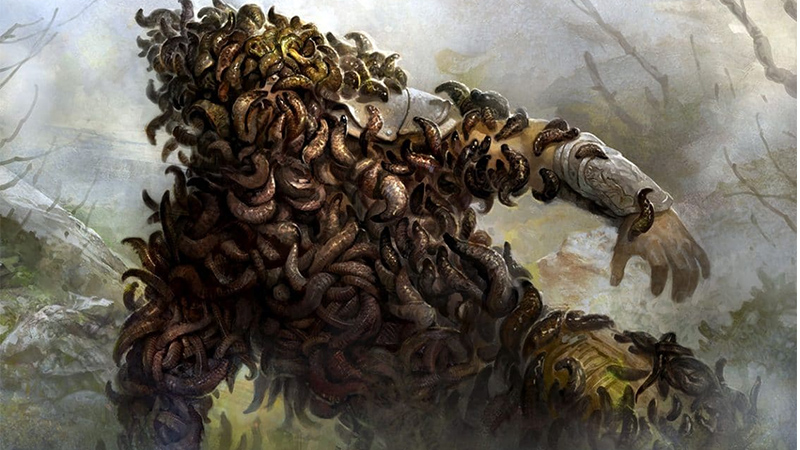 It’s Friday and I’m waiting for tacos to get here (mmm, tacos). While waiting, I asked my six-year-old son Jack for some monster ideas. Here’s what he cooked up:

A monster that changes shape and blends in with everything.

I asked Jack what made the rither different than a doppelganger or mimic. He didn’t really clarify (it more or less sounded like a big mimic), but he explained that the way rithers trick people is different than mimics in that they don’t attack when you get near or touch, rather they wait for you to get inside them.

He used the example of my truck. It’s open, so you go inside, and then CHOMP!

I then offered to Jack, “How about a mimic the size of a room? Once you go inside, it shuts itself off and then uses an enzyme to turn you into treasure.”

What is a death snake?

A giant snake that goblins ride and can swallow people whole.

If you follow this blog, you know how I love weenies and support for weenies. So this one should be pretty fun and easy to do since I can base the snake itself on giant constrictor snakes from the appendix in the Monster Manual.

What does a haunted book do?

When you open it it has monsters in it (like your books), and whichever monster you get to, those monsters come to life.

This was a pretty interesting idea that I really liked. Of course, it’s probably better as a cursed magic item than it is a monster, but still, there could be some interesting things here. Sort of like a Deck of Many Things that summons monsters? I played with a few ideas on this one and finally landed on a possessed-book with lich-like powers that can suck creatures inside it. Once the creatures are within, it can expel those creatures as shadows and specters.

What do bloodsucker worms do?

They suck your blood, of course!

Jack’s answer was priceless. Of course, this will work as a swarm. And unlike the rot grub swarm from Volo’s Guide to Monsters that crawls in your flesh and eats your heart (ew), these will drain your blood a la a stirge.

Shapechanger. The rither can use its action to polymorph into a room measuring up to 15 feet wide by 15 feet long by 15 feet high with one exit (its mouth), or back into its true, amorphous form. Its statistics are the same in each form. Any equipment it is wearing or carrying isn’t transformed. It reverts to its true form if it dies.

False Appearance (Room Form Only). While the rither remains motionless, it is indistinguishable from an ordinary room. Large or smaller creature can enter the rither’s space.

Pseudopod. Melee Weapon Attack: +11 to hit, reach 10 ft., one target. Hit: 16 (2d8 + 7) bludgeoning damage. If the target is a creature, it is grappled (escape DC 17) and pulled inside of the rither. The rither can grapple one target at a time with its pseudopod.

Swallow. The rither seals off its exit and collapses in on itself. Any creatures inside of it are swallowed. While swallowed, a creature is blinded, restrained, and has total cover against attacks and other effects outside the rither. At the start of the rither’s next turn, each swallowed creature must succeed on a DC 17 Charisma check or become cursed with the rither’s curse. The cursed target can’t regain hit points, and its Strength score decreases by 1 for every round that elapses. If the curse reduces the target’s Strength to 0, the target dies and its body collapses into a pile of gold coins equal to 10 gold coins for every pound the creature weighs. The curse lasts until removed by the remove curse spell or other magic, the creature exits the rither, or the rither dies. If a creature’s saving throw is successful or the effect ends for it, the creature is immune to the rither’s curse for the next 24 hours.

Bite. Melee Weapon Attack: +8 to hit, reach 10 ft. one creature. Hit: 14 (2d8 + 5) piercing damage plus 18 (4d8) poison damage. If the target is a Medium or smaller creature, it is grappled (escape DC 15). While grappled, the creature is restrained until the grapple ends.

Languages Common plus up to five other languages

Legendary Resistance (3/day). If the haunted book fails a saving throw, it can choose to succeed instead.

Magic Resistance. The haunted book has advantage on saving throws against spells and other magical effects.

Rejuvenation. If the haunted book is destroyed, it regains all its hit points in 24 hours unless holy water is sprinkled on its remains or a dispel magic or remove curse spell is cast on them.

Spellcasting. The haunted book is a 17-level spellcaster (spell save DC 18, +8 to hit with spell attacks). It requires no somatic or material components to cast its spells. The haunted book has the following wizard spells prepared:

Turn Resistance. The haunted book has advantage on saving throws against any effect that turns undead.

Trap (Recharge 5-6). The book attempts to absorb into its pages one creature that it can see within 30 feet of it. The target must succeed on a DC 18 Charisma saving throw or become trapped inside the book’s pages. While trapped, the target is incapacitated, it has total cover against attacks and other effects outside the book, and it takes 13 (3d8) psychic damage at the start of each of the haunted book’s turns. In addition, the creature’s hit point maximum is reduced by an amount equal to the psychic damage taken and the haunted book regains hit points equal to that amount. This reduction lasts until the target finishes a long rest. The target dies and is permanently absorbed into the book if this effect reduces its hit point maximum to 0.

Horrific Imagery (Costs 2 actions). The haunted book flutters, creating frightening images for one creature it can see within 10 feet of it. The target must succeed on a DC 18 Wisdom saving throw against this magic or become frightened for 1 minute. The frightened target can repeat the saving throw at the end of each of its turns, ending the effect on itself on a success. If a target’s saving throw is successful or the effect ends for it, the target is immune to the haunted book’s Horrific Imagery for the next 24 hours.

Summon Undead (Costs 3 actions). Up to three shadows or specters appear in unoccupied spaces within 30 feet of the haunted book and remain until destroyed. Undead summoned in this way roll initiative and act in the next available turn. The haunted book can have up to three undead summoned by this ability at a time.

When I’m low on ideas, Jack’s always got some good ones for me. And he definitely did not fail to deliver this time. I want to use all of these monsters in my own campaign as soon as possible!

Art by Wizards of the Coast, Paizo Publishing, and Shutterstock (used with permission)