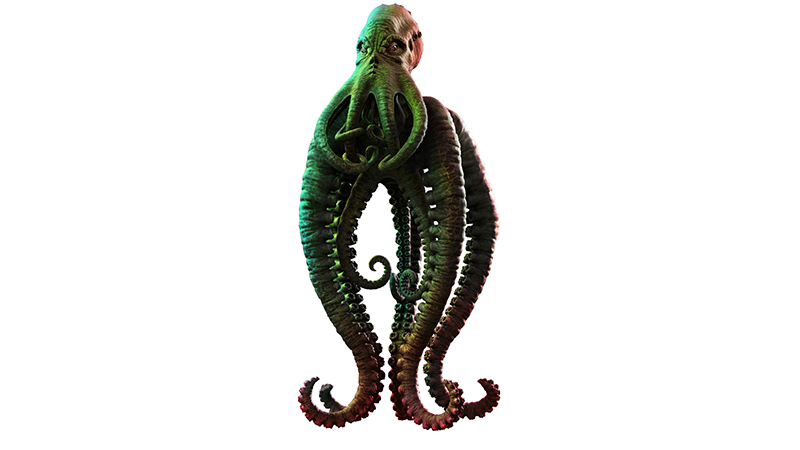 There are a few monsters in Dungeons & Dragons whose existence serves to only torment players. Whether it’s a monster disguised as a treasure chest (mimics!), or monsters that drop from the ceilings (piercers), or monsters that eat through metal (rust monsters!), let’s face it: these things don’t make evolutionary sense. Obviously, they’re the machinations of some pony-tailed madman (Gary!).

But it’s a part of the game. And frankly, it’s fun, especially if you’re the DM. So here are 3 new a-hole monsters for you to use in your Dungeons & Dragons Fifth Edition games to torment your players.

Note: the names are intentionally bad as a throwback to old-school D&D monsters.

First, we have the coin bug. What is it? Well, it’s a bug that looks like a coin, of course. The creature’s shell is a large, flat cylinder that is gold, copper, or silver in color. Bumps along its surface give it the appearance of coin markings. Flipping it over, it looks like a normal bug with six legs, eyes, and antennae. Trouble is, by the time you’re close enough to pick one up the things are crawling all over you.

Typically, coin bugs lie dormant in caverns waiting for warm creatures to either pick them up or come close, at which point they reveal their true nature. Naturally, they are flesh eaters.

The coin bug is a variation on the insect swarm (page 338 of the Monster Manual). A swarm of coin bugs has the following trait:

The actual origin of ubertubers are unknown. Some believe that they are a sub-species of ropers. While others think that they are worms that were twisted by dark magic.

Whatever they are, any adventurer that’s ever come against an ubertuber will tell you that they are no fun.

Spider Climb. The ubertuber can climb difficult surfaces, including upside down on ceilings, without needing to make an ability check.

Suction. The ubertuber sticks to a solid surface with its suction-cup-like base. It has advantage on Strength checks against effects that would move it.

Bite. Melee Weapon Attack: +4 to hit, reach 30 ft., one creature. Hit: 8 (1d12 + 2) bludgeoning damage plus 3 (1d6) acid damage. If the target is Medium or smaller, it is grappled (escape DC 12), can’t breathe, restrained, and the ubertuber can use its bonus action to pull the creature up to 30 feet towards it until the grapple ends. The ubertuber can grapple one target at a time with its bite.

Swallow. The ubertuber makes one bite attack against a Medium or smaller target it is grappling. If the attack hits, the target is also swallowed, and the grapple ends. While swallowed, the target is blinded and restrained, it has total cover against attacks and other effects outside the ubertuber, and it takes 14 (4d6) acid damage at the start of each of the ubertuber’s turns. An ubertuber can have only one creature swallowed at a time.

Any adventurer that has ever heard of a mind flayer probably has a healthy fear of one. And that is probably what kept squeps safe from being killed off by overzealous dungeon-delver all these years.

A squep is a larger-than-normal amphibious octopus that has the ability to walk upright on the tips of its tentacles. Because of the thickness of its tentacles and the tight formation the squeps keep them in, in a dark cavern they look very much like illithids.

Much like normal octopi, squeps use their tentacles to grapple their targets. If put into a position of severe danger, a squep can fire a spray of ink at its attacker and flee towards the nearest body of water. While squeps can travel on land, they move much quicker in the water.

Amphibious. The squep can breathe air and water.

Eerie Resemblance. The squep resembles a mind flayer. A creature that can see the squep can discern its true nature with a successful DC 15 Intelligence (Nature) check.

Tentacles. Melee Weapon Attack: +3 to hit, reach 10 ft., one target. Hit: 4 (1d6 + 1) bludgeoning damage, and the target is grappled (escape DC 11). Until this grapple ends, the squep can’t use its tentacles on another target.

Squirt Ink (Recharges after a Short or Long Rest). The squep squirts ink at one target it can see within 10 feet of it. The target must succeed on a DC 11 Constitution saving through or become blinded for 1 minute. The creature can repeat its saving throw at the end of each of its turns, ending the effect on itself with a success.

Hope you and your players get a kick out of these monsters.

For more cool monsters, be sure to sign up to the mailing list. You can use either the opt-in form on the right or the one down in the footer.