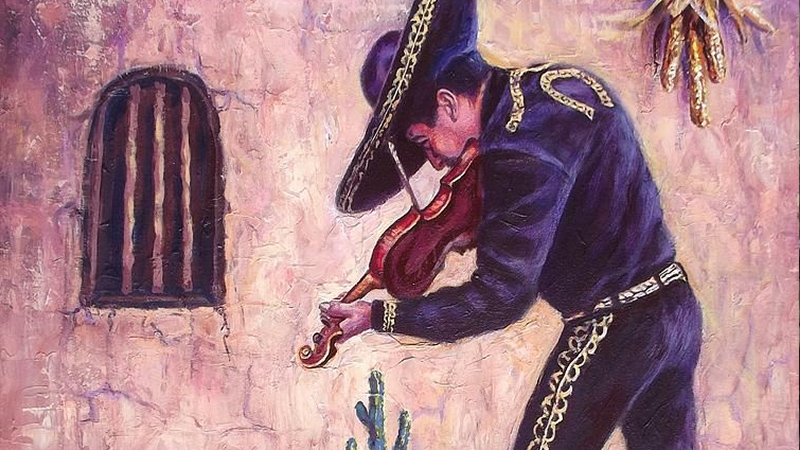 Part wanderer, part observer, and always wise, el mariachi are powerful bards whose magical melodies can elevate a wedding or birth, or bring melancholy or hope to a funeral. While there is no true structure or organization to the mariachi, nonetheless they are united in their efforts.

Typically, a mariachi wears the traje de charro, which was originally a type of noble horseman’s outfit. The traje de charro usually consists of the following garments: fitted trousers adorned with decorative buttons or full-length skirts (for women), an embroidered belt, ankle high boots, a wide bowtie, and a matching, embroidered sombrero. Most trajes de charro are black with gold or red accents, although other colors can be found in heavily populated areas. Rural mariachis sometimes forgo the fashionable attire of their urban counterparts, wearing what’s practical.

Here are a few bardic colleges of note in Alberia.

Even though the Mexjicanos won their independence from the Lejodores nearly 70 years ago, much of their culture is still seen in modern Mexjicano society. For example, the College of Valencia, a musical college built by the Lejodores three hundred years prior, still stands in Tenochtitlan. This school combines the traditions of Lejos culture with those of the indigenous Alberian tribes, particularly the Aztecs of yore. The College of Valencia teaches the methods of the College of Lore as described in the Player’s Handbook.

Standing in stark contrast to Valencia’s more modern school is Paax Nah in the Mayan capital of Tikal. While the Mexjicanos accept the cultures of the Lejodores into their own, the Mayans are much more conservative and strive to preserve their cultural roots. In addition to providing education to aspiring musicians, Paax Nah is also a temple to the Mayan god of music and poetry, Ah Xoc Kin. Paax Nah’s students can learn the ways of the College of Lore detailed in the Player’s Handbook.

The Royal Academy of Music

The Baymen aren’t without their music, either. While it doesn’t boast the numbers that the Mexjicanos and Mayan bardic colleges do, it still produces some of the best musicians in all of Alberia. The Royal Academy of Music was founded by military musicians who sailed with the Baymen at the founding of Balix. As such, the bards of the Royal Academy train extensively in both music and combat. Therefore, those who train at the Royal Academy are taught the methods of the College of Valor from the Player’s Handbook.

The College of El Mariachi is not so much a college as it is an oral tradition that most, if not all, el mariachi share. Instead of formal training, a student pairs with a maestro who allows the fledgling musician to follow him or her on his or her journeys across Alberia. Over time, the new bard learns the ways of the College of Wanderers, as outlined below.

At 3rd level, a bard gains the Bard College feature. The College of Wanderers is available to a bard in addition to those offered in the Player’s Handbook.

The College of Wanderers is more of a way of learning than a place of learning. Most bards who learn the ways of this bardic college do so under the tutelage of a traveling musician. Through adventures and experience, the student learns how to blend enchantments with musical notation. Wanderer Bards are a little more wizened and patient, having seen a great deal of the world, and bring an element of gravitas to most adventuring groups they join. Still, they’re bards and know that their strength lies in their charm and lyrics rather than their weapons.

When you join the College of Wanderers at 3rd level, you gain the ability to inspire your comrades at the start of a battle before almost anyone else can act. At the start of combat before initiative is rolled, if you are not surprised or incapacitated, you can choose to use your reaction at the end of initiative count 20 to inspire one creature other than yourself with your Bardic Inspiration ability.

As a student of the College of Wanderers, you have mastered the outside world. At 3rd level, when you join this college, whenever you make an Intelligence or Wisdom check while outdoors, your proficiency bonus is doubled if you are using a skill that you’re proficient in. And you are proficient in Intelligence (Nature) and Wisdom (Survival) checks. In addition, while traveling for an hour or more, you gain the following benefits:

Beginning at 6th level, your speed increases by 10 feet while you are wearing light or no armor and are not wielding a shield.

Hope to the Hopeless

Starting at 14th level, you can play a rousing melody that helps your allies overcome magical ailments. You can expend one use of your Bardic Inspiration to end one spell on one willing creature within 30 feet of you that can hear you.

These are new items that are available for you to use in your Fifth Edition Campaign Settings.

Traje de Charro. The traje de charro is the traditional suit of clothing worn by el mariachi. It counts as either fine clothes or costume clothes depending on which equipment pack you take as a 1st-level Bard.

These new player options are part of the Mesoamerican fantasy campaign setting I’m creating for Patreon. Half of the content for the setting will be free here on the blog and the other half on Patreon (some of which will be free there, too).