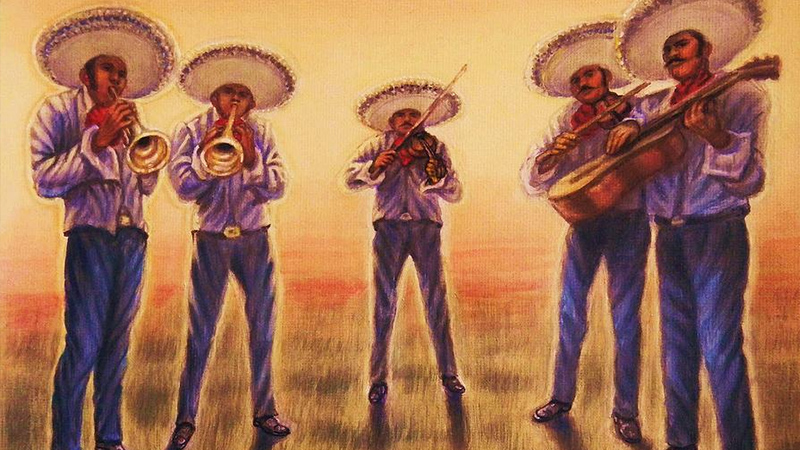 Mariachi is a type of Mexican music and a musical group whose style dates back to at least the 18th century. It has distinctive instrumentation, performance, and singing styles, as well as costumery. Many mariachis wear the traje de charro, or horserider’s uniform, complete with large, wide-brimmed hats (sombrero de charro).

Typically, mariachis employ guitars, trumpets, and violins in their music.

In Dungeons & Dragons, and especially in El Ocho Campaign Setting, los mariachis are urban or traveling entertainers. Some can be found with adventurers, while others may work specifically as musicians for wealthy nobles or mercenaries. Frequently, mariachis work together as a band which amplifies their power.

Spellcasting. The mariachi is a 3rd-level spellcaster. Its spellcasting ability is Charisma (spell save DC 12, +4 to hit with spell attacks). It has the following bard spells prepared:

Compelling Introduction (2/day). During the first round of combat, as long as the mariachi is not surprised or incapacitated, it can use its reaction at the end of initiative count 20 to innately cast bless, requiring no material components other than its instrument. Its innate spellcasting ability is Charisma.

Mariachis don’t always work alone. Sometimes they come together to form bands. When this happens, their ability to enchant listeners with their music intensifies.

A mariachi band consists of at least three mariachis, but usually no more than seven.

Shared Spellcasting. While at least three members of a mariachi band are within 30 feet of one another, they can each cast the following spells from the bard’s spell list, but must share the spell slots among themselves. These additional spell slots do not replace their individual spell slots, which they still have access to.

Mariachis are part of the Mesoamerican fantasy campaign setting I’m creating for Patreon, but free for you to use in your own Dungeons & Dragons Fifth Edition campaign settings.