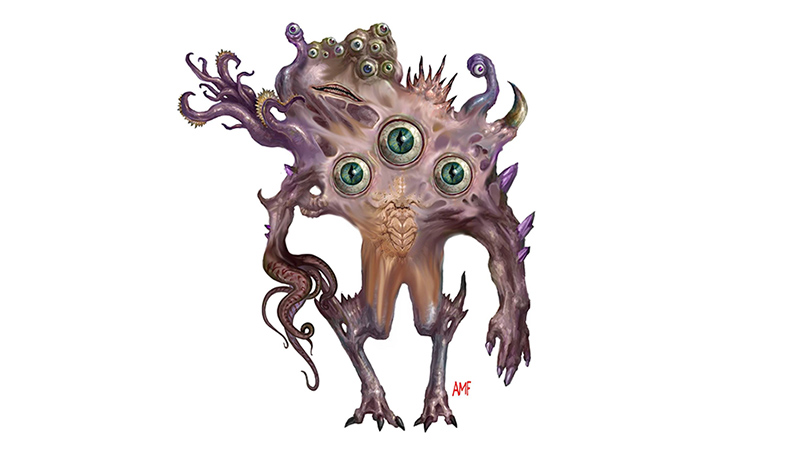 Imagine if your nightmares came to life. Any of them. How pleasant would it be to wake up and find yourself face-to-face with whatever stress-generated phantasm your mind concocted while you were unconscious? Imagine some ghoul that looks like you, naked, with all its teeth falling out. Perhaps your mind would create childhood embarrassments given physical form. Or worst yet, consider the dark, shapeless horrors that lurk at the corners of your subconscious made real, eager to see their way into the prime material.

This is the trouble beholders face. Megalomaniacal, paranoid egomaniacs, beholders only create new beholders when they dream of themselves. Often, this surprise “birth” results in a nasty fight to the death between the two. On the odd ocassion when the “newborn beholder” escapes without killing its creator, another beholder enters the world.

Gods help us all.

Of course, a carbon-copy of a preexisting beholder isn’t the worst possible result of beholder dreaming. Other unusual beholder variants can be created when a beholder has nightmares.

A beholder that fears blood loss might beget a blood-drinking death kiss.

The horrific possibilities are endless.

What happens when a beholder dreams of humanoids?

Beholders aren’t fond of, well… much. They almost despise other species as much as they despise themselves. But the eye tyrants, those beholders with a diminished proclivity to hate the presence of others (marginally, mind you), realize that if you want power, they’ve got to lead. And leading means being around others.

Aberrations, beasts, and undead frequently fill the ranks of an undead’s coterie. But sometimes a beholder has to break down and surround itself with humanoids. After all, humanoids are simple. They’re like the “crossbows” of intelligent species: aim, shoot, reload. And if it stops working, blow it up with a fuckin’ disintegration ray and find another. I mean, the things multiply like rabbits.

Of course, being around so many humanoids may have adverse effects on the beholder. Just as a barmaid dreams of spilling beer or a blacksmith dreams of catching his shop on fire, sometimes beholders can dream of being human. A true nightmare for the eyeball monsters!

And the results are… *shudder*

They call the things abrethaghals.

An abrethaghal is part-humanoid and part-beholder. Like beholders, no two abrethaghals look alike. Some may have humanoid legs dangling below a fat beholder body. While another may have small, humanoid baby-like arms in place of its eye stalks. Fully-developed abrethaghals might look just like a human–all except for a single, never blinking-eyeball in place of its head, of course.

Abrethaghals take on many of the powers of their beholder “parents”, albeit less effectively. For example, abrethaghals emit anti-magic not in a cone, but in a limited aura that surrounds them. They have telekinesis, but it’s only capable of minor tasks. And their other powers don’t have quite the same “umph” as a beholder. However, they have a better understanding of their abilities and can use them more efficiently.

Regardless, abrethaghals are just as cunning (if not more so) than beholders. Combined with human reasoning and logic, and a reduced sense of overwrought self-worth, these gross monstrosities often lead their own armies.

That crazy image up top there? Yeah, that came from the sick, twisted mind of professional graphic designer Tony Franklin!

He created it for Adobe’s and Wizard of the Coast’s Summon the Terror contest.

Thanks for the opportunity to stat your monster, Tony!

Innate Spellcasting. The abrethaghal’s spellcasting ability is Intelligence (spell save DC 16, +8 to hit with spell attacks). The abrethaghal can innately cast the following spells, requiring no material components.

Innate Spell (Costs 2 Actions). The abrethaghal casts one of its innate spells.

Again, a huge thanks to Tony Franklin for letting me stat up this bizarre creature. I plan on using one right away in my regular weekly campaigns.