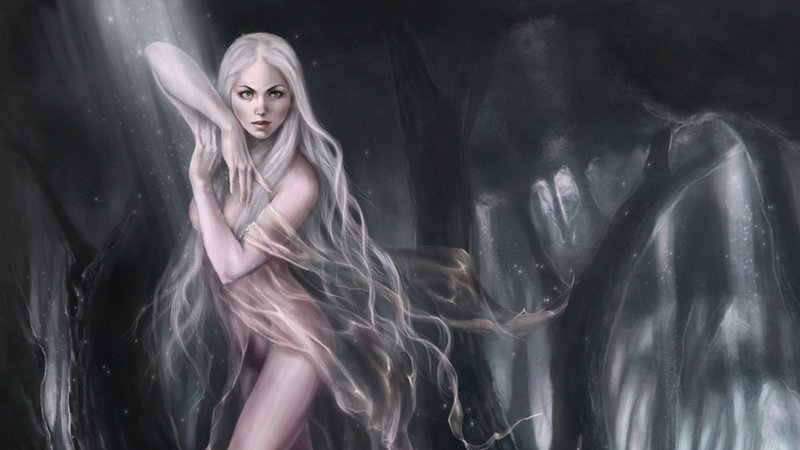 Call me corny, but I’ve always loved Ravenloft. I think the setting has a cool atmosphere, awesome monsters, and some great mechanics. While I like the Fifth Edition version found in Curse of Strahd, my love for Ravenloft first came in second edition and later in third edition when White Wolf had the rights.

Rare in the extreme, the lhiannan shee (LAN-an SHE) is an undead vampiric spirit with an affinity for men of high Charisma and strong poetic ability – bards. The lhiannan shee looks like a stunningly beautiful female human, elf, or half-elf. It is thought to be the undead spirit of a woman who killed herself for the unrequited love of a bard or other artistically talented and desirable, but unobtainable or callous man.

Like many undead, the lhiannan shee is ultimately motivated to destroy those who fall into its hands. Because of its seductive nature, however, its victims would often trade their fate with no other. Bards whisper of such creatures with a mixture of muted fear and a death-wish desire.

Lhiannan shee are solitary and never found working in partnership with any other being, living or undead. They react only to their own desires and whims, ignoring all else but their victims unless they are attacked or detected. Because of their love for beautiful places, these spirits usually enjoy springs, running water in natural surroundings, and unspoiled woodlands. Their treasures are merely pretty baubles they have found on the bodies of their victims, objects they mindlessly play with when otherwise unoccupied. They approach civilized areas only if following their victims, and return to their woodlands once their victims have died or have escaped their control.

The bard Mintiper Moonsilver speaks of these spirits as “the ghosts of obsession”. Strangely, there is very little poetic or musical lore about lhiannan shee. Bards who might know about them are reluctant to speak of them at all, out of fear of attracting them or an inability to confront their longing for a lost “love”. Lhiannan shee do not return such devotion. Mintiper has claimed that the faithless lhiannan shee does not remember any of its past victims once it has found a new one. Each new victim is like the creature.s first love. Priests usually serve as the main source of information on these beings, but priests know very little about them that is accurate or useful, saying that such spirits are the just rewards of imprudent bards. Some bards and sages in Waterdeep have begun to speak of them more often these days in hopes of warning others of their peril. Such warnings are not as effective as hoped.

Detect Bards. The banshee can magically sense the presence of creatures that can cast bard spells up to 5 miles away. She knows the direction they’re in but not their exact locations.

Incorporeal Movement. The banshee can move through other creatures and objects as if they were difficult terrain. She takes 5 (1d10) force damage if she ends her turn inside an object.

Invisibility. As a bonus action, the banshee can magically turn invisible until she attacks, casts a spell, or uses her Charming Touch or Kiss of the Lhiannan Shee, or until her concentration is broken, up to 1 hour (as if concentrating on a spell). Any equipment the lhiannan shee is wearing is invisible with her.

Charming Touch (1/day). The banshee touches one creature it can see within 5 feet of it. The creature must succeed on a DC 13 Wisdom saving throw or become charmed by the banshee for 1 day, or until the banshee dies or is more than 1 mile from the target. The charmed target obeys the banshee’s commands and can’t take reactions, and the banshee and the target can communicate telepathically with each other at a distance of up to 1 mile. Whenever the charmed target takes damage from anything other than the banshee’s Kiss of the Lianna Shee feature, it can repeat the saving throw, ending the effect on itself on a success.

Kiss of the Lhiannan Shee (1/day). The banshee targets one creature it has charmed with its Charming Touch. The creature must succeed on a DC 13 Constitution saving throw or take 7 (2d6)  necrotic damage. The target’s hit point maximum is reduced by an amount equal to the necrotic damage taken. The reduction lasts until cured by a lesser restoration spell or similar magic. The target dies if this effect reduces its hit point maximum to 0.

While a humanoid that can cast spells from the bard spell list is charmed by the lhiannan shee, it gains the Lliannan Shee’s Lover Template. If the lhiannan shee’s charm effect ends for the lover, it loses this template. It keeps its statistics except as follows:

Healing Resistance. Whenever a spellcaster casts a beneficial spell on the lover such as cure wounds, lesser restoration, greater restoration, remove curse, etc. the lover must make a Wisdom saving throw versus the caster’s spell save DC. On a successful save, the creature resists the spell and nothing happens. On a failure, the spell works as normal.

Kashehotapolo are an ancient race of goblinoid creatures which inhabit remote woodland areas. Though naturally skittish, they take special delight in driving humanoids to acts of evil.

A kashehotapolo is a humanoid standing about three feet in height, with distinctly goblinoid features. The overall build is almost fetal in shape, with a large head and stubby limbs. The face is small and wrinkled, and the ears are pointed. A kashehotapolo has black, beady eyes and a wide mouth filled with human-like teeth that have been filed to points. Skin color varies widely but is always a hue that enables them to hide effectively in the forest. Dappled greens and muddy earth tones are typical. Kashehotapolo keep their black hair in a short mohawk with a central braid in the back. They wear nothing except for bone earplugs in their stretched lobes.

Kashehotapolo speak their own language, which sounds like an eerie cacophony of bird chirps and hoots. They do not appear to understand other humanoid tongues.

The kashehotapolo are lawless creatures without many possessions. They live in a loose hunter-gatherer society where bands of individuals group together for protection. There are no kashehotapolo leaders, and the band members remain fairly independent unless the group is threatened. They do not build permanent homes but make their lairs in regular, secluded locations, such as the mouths of caves or in hollow logs. Though nocturnal, they are most active at dusk and dawn. There do not appear to be distinct sexes of kashehotapolo, and their reproduction remains a puzzle.

Kashehotapolo are remarkably resourceful creatures which in many ways epitomize the conception of a savage race living in harmony with nature. Their malicious tendencies emerge when they sing their victims to sleep and poison them, apparently just to encourage the spread of evil. When they encounter other intelligent beings, their natural skittishness battles their gleeful desire to infect good beings with evil. Very occasionally, they will engage in cannibalism of intelligent creatures if food is scarce. Many necromancers and evil priests desire to obtain a sample of kashehotapolo musk, but it is not known how long the poison keeps.

Innate Spellcasting. The goblin’s innate spellcasting ability is Wisdom. The goblin can innately cast the following spells, requiring no components.

The valpurgeist, or hanged man, is an undead creature that is sometimes manifested when an innocent man or woman is wrongly hanged for a crime. Unable to prove its innocence in life, it returns after death to claim the lives of those who sent it to the gallows.

Valpurgeists are clearly human in appearance, although they are far from able to pass as normal men or women. Their necks have clearly been broken, causing the head to hang at an awkward angle and flop about loosely as the creature moves. Further, the skin of the creature has taken on the pallor of the dead and an odor of decay hangs heavy in the air around the thing.

The valpurgeist cannot speak and seems unwilling or unable to listen to the words of others. Attempts at communication that do not involve magic (a speak with dead spell, for example) are doomed to failure. Those who do manage to speak with the creature will find that it is wholly obsessed with exacting revenge and destroying those who have wronged it.

Rejuvenation. When the valpurgeist’s body is destroyed, its soul lingers. After 24 hours, the soul inhabits and animates another corpse on the same plane of existence and regains all its hit points. The new body assumes the appearance of the original valpurgeist. While the soul is bodiless, a wish spell can be used to force the soul to go to the afterlife and not return.

Fist. Melee Weapon Attack: +6 to hit, reach 5 ft., one target. Hit: 7 (1d6 + 4) bludgeoning damage. Instead of dealing damage, the valpurgeist can grapple the target (escape DC 18) provided the target is Large or smaller.

Strangle. A creature grappled by the valpurgeist must make a DC 14 Constitution saving throw, taking 8 (1d8 + 4) damage on a failed save or half as much damage on a successful one.

Hopefully, you have fun with some of these cool, old Ravenloft monsters.

If you have any suggestions for monsters you’d like to see converted to Fifth Edition or anything else, leave a comment below.