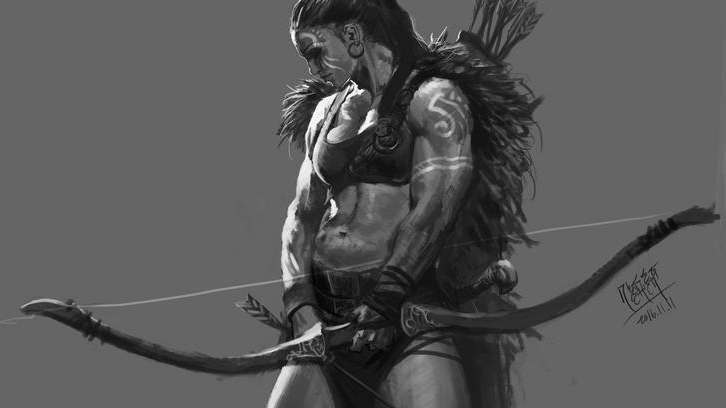 All of this content is FREE for you to use in your Fifth Edition campaigns. However, if you’re interested in getting this content in PDF format, patrons of every tier get this PDF plus others for FREE. It’s only $3/month to sign up. The finalized version includes corrections and final adjustments, plus bonus content.

The three subclasses listed below are available for characters to choose in addition to those normally offered.

Many see barbarians as savage nomads, moving from place to place without any real destination to call home. However, those who take up the mantle of Warden are sworn to protect specific locations from dangers. Wardens take on aspects of both barbarians and rangers, balancing their rage-driven melee prowess with deadly ranged attacks.

At 3rd level, when you are wielding a ranged weapon that deals at least 1d6 damage, you can use the weapon itself to make melee attacks. On a successful hit, you deal bludgeoning damage equal to 1d4 plus your Strength modifier. The melee attack does not expend ammunition.

Magic of the Warden

At 6th level, you can invoke nature’s might to assist you. You know the following spells: fog cloud, hunter’s mark, or pass without trace. Once you cast a spell using this feature, you can’t do so again until you complete a long rest. Wisdom is your spellcasting ability for each of these spells.

At 10th level, while raging, opportunity attacks against you are made with disadvantage. In addition, if a creature hits you with an opportunity attack while you are raging, you can use your reaction to make a melee weapon attack against that creature.

At 14th level, while you are raging and you make a ranged weapon attack against a target within 30 feet of you, you can add your Rage Damage bonus to the damage roll.

Monks of the Way of the Curved Arrow turn their ki and martial arts towards archery. Sometimes called Zen Archers, these monks are just as effective at a distance as they are in close combat.

It’s believed that Zen Archers were original a subsect of the Way of the Kensei.

Starting when you choose this Monastic Tradition at 3rd level, you gain proficiency with longbows if you don’t already have it. The longbow counts as a monk weapon for you.

At 3rd level, you can use your bonus action to make your ranged weapon attacks with your bow more deadly. When you do so, choose one of the following benefits. The benefit lasts until the end of your current turn.

At 3rd level, your connection to the Elemental Plane of Air grants you the ability to read, write, and speak Auran.

Curved Arrow. You can spend 1 ki point to have your next attack with your shortbow or longbow ignore half cover and three-quarters cover.

Deadly Arrow. You can spend 1 kit point have your next attack with your shortbow or longbow deal extra damage to the target equal to your Martial Arts die. You can use this feature only once on each of your turns.

Force Arrow. You can spend 2 ki points to turn your arrow into a bolt of crackling force energy. When you fire your shortbow or crossbow as part of your Attack action, the arrow automatically hits a target of your choice within 120 feet of you. The arrow then deals force damage equal to the weapon’s normal damage die plus your Wisdom modifier.

Arrow of the Wrathful

At 11th level, you gain the ability to fire a devastating burst of energy from your longbow or shortbow. As an action, a brilliant ray of energy forming a line 100 feet long and 10 feet wide blasts out from you. Each creature in the area must succeed on a Dexterity saving throw or take 2d6 radiant damage. A creature doesn’t need to make the save if the creature is behind total cover. You can increase the ray’s damage by spending ki points. Each point you spend, to a maximum of 3, increases the damage by 2d6.

At 17th level, when you use your Flurry of Blows, you can choose to make up to three ranged weapon attacks from a shortbow or longbow in place of the two unarmed strikes normally allowed. Each attack made in this way must target a different creature that is within 30 feet of you.

Rogues are already well-known for their ability to snipe from the shadows. Rogue Trickshots, however, have taken their love of archery to the next level.

Starting when you choose this Roguish Archetype at 3rd level, you gain proficiency with longbows if you don’t already have it.

At 3rd level, you can use your bonus action to carefully aim your next shot. Choose a target within 100 feet of you. Then, select one of the following benefits:

At 9th level, if you are surprised at the beginning of combat and aren’t incapacitated, you can act normally on your first turn, but only if you make a ranged weapon attack before doing anything else on that turn.

At 13th level, you can use your arrow to temporarily subdue foes. When you use your Aimed Shot feature, you can choose one of the following benefits in place of the other benefits already offered:

Starting at 17th level, your aimed shots are capable of instant death. When you attack and hit a creature that you’ve targeted with your Aim Shot feature, you may forgo one of the feature’s normal benefit offerings to force the target to make a Constitution saving throw (DC 8 + your Dexterity modifier + your proficiency bonus). On a failed saving throw, double the damage of your attack against the creature. You can use this feature three times, and regain expended uses after you finish a long rest.