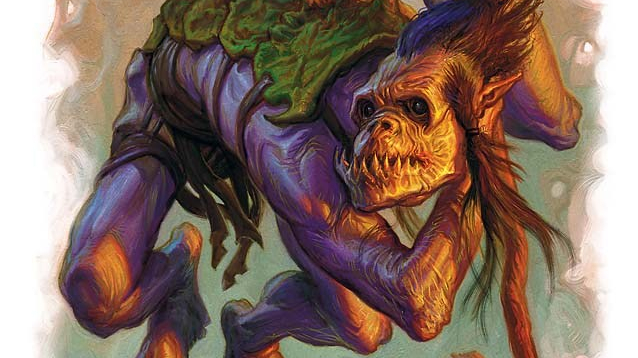 The gith are a race of grotesque humanoids that appear to be a peculiar mixture of elf and reptile. They are extremely gaunt and lanky, with long gangling arms and spindly legs. Their hands three fingers with no opposable thumb, yet they are able to use tools and wield weapons. Both their fingers and toes end in sharp claws. If one could get a gith to stand up straight, it would measure close to seven feet tall. However, most gith appear to be no more than five feet tall, for they stand hunched over at the shoulders.

Innate Spellcasting. The gith’s innate spellcasting ability is Intelligence (spell save DC 11, +3 to hit with spell attacks). It can innately cast the following spells requiring no components:

Psychic Defenses. The gith is immune to any effect that would detect its emotions or read its thoughts and divination spells. The effect even foils wish spells and spells or effects of similar power used to affect the gith’s mind or to gain information about it.

The new spells listed in the monster descriptions are described in detail below (marked with an asterisk).

You attempt to use telekinesis to control the actions and movements of another creature. Choose one creature that you can see within range. The target must make a Strength saving throw. On a failed saving throw, you gain rudimentary control over the target’s limbs. The target is aware of its surroundings and can even talk while it is being controlled by you.

Each turn for the duration, you can use your action to make the target stand up, sit down, walk, turn around, etc. You can even force the target to attack physically, but with disadvantage on its attack rolls. During this time, you can also cause the creature to use a reaction, but this requires you use your own reaction as well.

The target must stay within 60 feet of you or you lose control over it. Each time the target takes damage or is forced to do something that would harm it or its allies, like walking off a cliff or poking a red dragon, the target can make another Strength saving throw, ending the effect on itself with a success.

Choose one creature that you can see within range. The target must make an Intelligence saving throw. On a failed save, the creature takes 5d8 psychic damage, and it goes into a fury, as its id runs rampant. On its next turn, it can use its action only to take the Dodge or Attack action. On a successful save, it takes half as much
damage.

Casting Time: 1 reaction, which you take when you are targeted by a spell or effect that requires you to make an Intelligence, Wisdom, or Charisma saving throw or deals psychic damage

Until the start of your next turn, you have a +5 bonus to Intelligence, Wisdom, and Charisma saving throws, and you gain resistance to psychic damage.

Target one creature you can see within range. The target must succeed on an Intelligence saving throw or take 1d10 psychic damage.