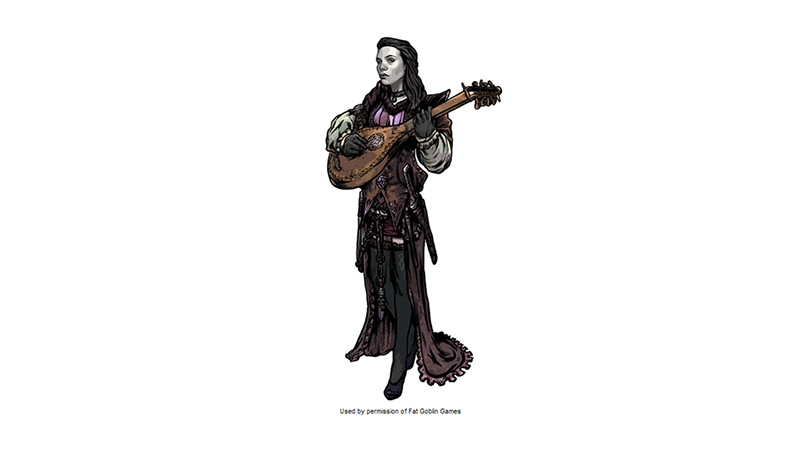 This entry is the second part of the Dungeon.Dude Promotional Campaign on Instagram. Together, the Instagram D&D Community helped Dungeon.Dude, a hard-working artist, get over 2,100 followers! Outstanding job, folks!

If you’d like to see the first part, check out the Barbarian Path of the Void.

This bardic college is designed to cover two areas. First, I want this bard to work as mob control against undead creatures. And second, I’ve created this subclass to give a lot of cool “death metal” and “goth” flavor to bards. Duh.

Here is what I hope to accomplish with its creation.

Like most bard subclasses, I’ve given it an enchantment-like area of effect power specifically targeting undead. Its Spirit Crusher ability is a combination of preexisting bard subclass abilities with a little bit of the Enchanter Arcane Tradition Hypnotic Gaze thrown in, although not nearly as powerful. Later, it allows your allies to deal up to 25 extra damage with an attack that lands while the creature is charmed. While it’s not as powerful as, say, the cleric’s Destroy Undead ability, it could end up dealing some pretty heavy damage (to put it in perspective, rogues at 14th level deal an average of 24.5 with their sneak attack) and it’s not limited to CRs, either. However, the triple limitation of the requisite Wisdom saving throw, the expenditure of a Bardic Inspiration, plus it only affecting undead should keep it fairly balanced. Finally, at 6th, you get a zombie buddy similar to the Hexblade warlock’s specter buddy, but with beefed up Con saves to keep it around longer thanks to its Undead Fortitude trait.

At 3rd level, a bard gains the Bard College feature. The following option is available to a bard, in addition to those normally offered.

Bards of the College of Death take inspiration from the afterlife. They are comfortable among the recently departed and undead, and craft music to reflect this dark fascination.

Death bards, as they’re commonly known, are often met with suspicion and fear. After all, how can someone so infatuated with the end of life be trusted? While some death bards are certainly evil, others merely appreciate the inevitability of mortality.

Death bards are effective warriors against undead, using their magic to fascinate and bewilder the horrors as they and their allies make short work of the tortured souls. They also possess necromantic magics, allowing them access to potent negative and necrotic energies through their music.

When you join the College of Death at 3rd level, you learn the chill touch cantrip. If you hit an undead target, it has disadvantage on all of its saving throws until the end of your next turn in addition to its attack rolls made against you.

At 3rd level, you gain the ability to weave a song of necromancy that fills undead with awe.

As an action, you can expend one use of your Bardic Inspiration to stop undead in their tracks. When you do so, choose a number of undead creatures you can see and that can see or hear you within 60 feet of you up to a number equal to your Charisma modifier (minimum of one). Each creature must succeed on a Wisdom saving throw against your spell save DC. If the creature fails its saving throw, it is awestruck by you until the end of your next turn. The affected creature’s movement becomes 0 and it has disadvantage on it attacks rolls and any attack rolls made against it are with advantage. Also, it has disadvantage on Wisdom (Perception) rolls made to perceive any creature other than you. On subsequent turns, you can use your bonus action to maintain this effect, extending its duration until the end of your next turn. However, the effect ends if you move more than 60 feet away from the creature, if the creature can’t hear you, or if the creature takes damage.

At 6th level, you can use your music to create an undead servant. If you perform for at least 1 minute, you can reanimate a corpse of a Medium or Small humanoid that you can see within 30 feet of you. The target becomes a zombie (the GM has the creature’s game statistics). When the zombie animates, it gains temporary hit points equal to half your bard level and it gains a special bonus to its attack rolls and Constitution saving throws equal to your Charisma modifier (minimum of +0). On each of your turns, you can use a bonus action to verbally command the zombie you made with this feature as long as it is within 60 feet of you and can hear you. You decide what action the zombie will take and where it will move during its next turn, or you can issue a general command, such as to guard a particular chamber or corridor. If you issue no commands, the zombie only defends itself against hostile creatures. Once given an order, the zombie continues to follow it until its task is complete.

The zombie is under you control for 24 hours, after which it turns back into a normal corpse. To maintain control of the creature for another 24 hours, you must use this feature on the zombie again before the current 24-hour period ends. This use of the feature keeps the zombie in its animated state.

Once you animate a zombie with this feature, you can’t use the feature again until you finish a long rest.

At 14th level, your music makes undead more susceptible to attacks.  When you or one of your allies attacks and hits an undead creature that is affected by your Spirit Crusher feature, the attack deals extra damage equal to 5 times your Charisma modifier (minimum of 1).