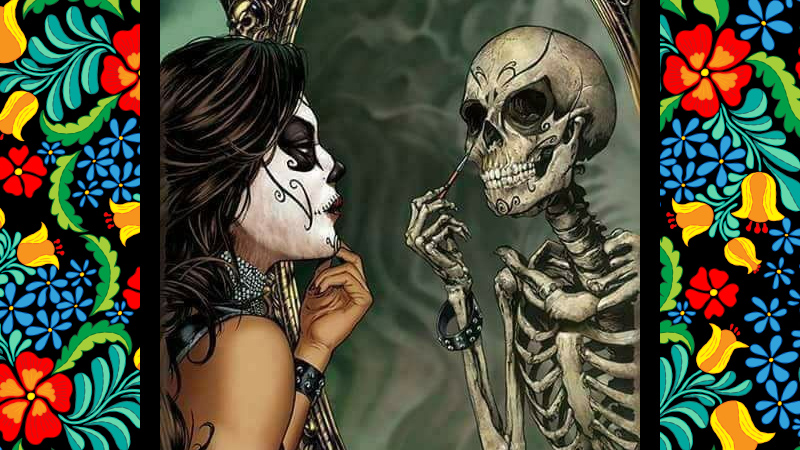 Coming back from Mexico and experiencing the awesome culture there, I’ve got all sorts of ideas kicking around for some cool, new Fifth Edition Dungeons & Dragons monsters. Day of the Dead (Día de Muertos) is Thursday, therefore, I thought it was appropriate to make the infamous Las Calaveras Catrinas for Dungeons & Dragons Fifth Edition.

What is La Calavera Catrina?

La Calavera Catrina (‘Dapper Skeleton’, ‘Elegant Skull’) is a 1910–1913 zinc etching by the Mexican printmaker, cartoon illustrator and lithographerJosé Guadalupe Posada. The image depicts a female skeleton dressed only in a hat, her chapeau en attende is related to European styles of the early 20th century. She is offered as a satirical portrait of those Mexican natives who, Posada felt, were aspiring to adopt European aristocratic traditions in the pre-revolution era. She, in particular, has become an icon of the Mexican Día de Muertos, or Day of the Dead called La Calavera Garbancera.

The iconic imagery of the elegant skeleton dressed in French finery is fantastic and easily fits into any fantasy setting. Often, la catrina is seen as a benevolent undead or angel, that helps the dead find their way in the afterlife (like in the Pixar film, Coco).

I see catrinas as a cross between intelligent skeletons and celestials. Their powers are limited, so they aren’t quite as strong as traditional angels or fiends (sort of like the constellations I’ve created), but they can definitely hold their own in most fights.

More often than not, a catrina keeps its distance in combat, using defensive strategies and escaping when pressed. Also, they have powers that assist other undead in combat, especially those that use Wisdom or Charisma-based attacks.

Shepherd of the Dead. While within 30 feet of la catrina, any undead ally of la catrina makes saving throws with advantage.

Multiattack. La catrina can use her Autoskepticism Ray if available. She then makes two slam attacks.

I’m back from Mexico now, so I’m going to be creating a whole slew of new monster ideas I got while I was there. Sign up to the mailing list to get regular updates (link on the right column and down in the footer).