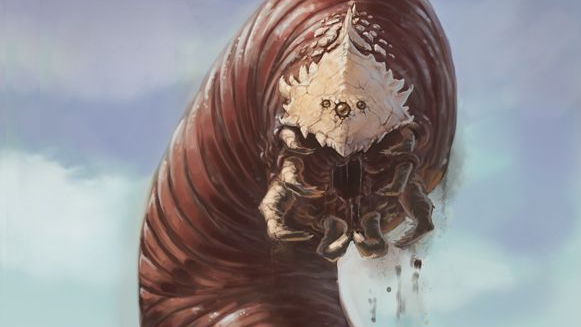 Some believe that nature is a chaotic, destructive force that cares little for the concepts of morality or fair play. Such devotees of wild destruction and entropy often point to the dreaded century worm as evidence of their philosophy and single out the repulsive, voracious creature as the living embodiment of the uncaring wrath of the natural world.

A century worm is composed of seven translucent segments of pulpy flesh topped by a menacing head partially covered by a hood of rough, dark brown skin. Its round, tooth-lined mouth easily accommodates an ogre. Hundreds of squirming larvae about the size of a human’s arm line the worm’s stomach, which doubles as a womb. These little creatures sometimes spill out of the worm’s mouth, though they die within an hour for want of their parent’s life-giving nutrient bile.

Century worm larvae are far from harmless to creatures that find themselves trapped within the parent. Once the little one has sapped the life out of a victim, one larva takes up residence in the victim’s body, where it gestates for a period of 100 years.

Multiattack. The worm uses its bite. It then makes one larva bite attack against each creature it has swallowed.

Bite. Melee Weapon Attack: +16 to hit, reach 10 ft., one target. Hit: 37 (6d8 + 10) piercing damage. If the target is a Large or smaller creature, it must succeed on a DC 20 Dexterity saving throw or be swallowed by the worm. A swallowed creature is blinded and restrained, it has total cover against attacks and other effects outside the worm, and it takes 28 (8d6) acid damage at the start of each of the worm’s turns.

If the worm takes 40 damage or more on a single turn from a creature inside it, the worm must succeed on a DC 22 Constitution saving throw at the end of that turn or regurgitate all swallowed creatures, which fall prone in a space within 10 feet of the worm. If the worm dies, a swallowed creature is no longer restrained by it and can escape from the corpse by using 20 feet of movement, exiting prone.