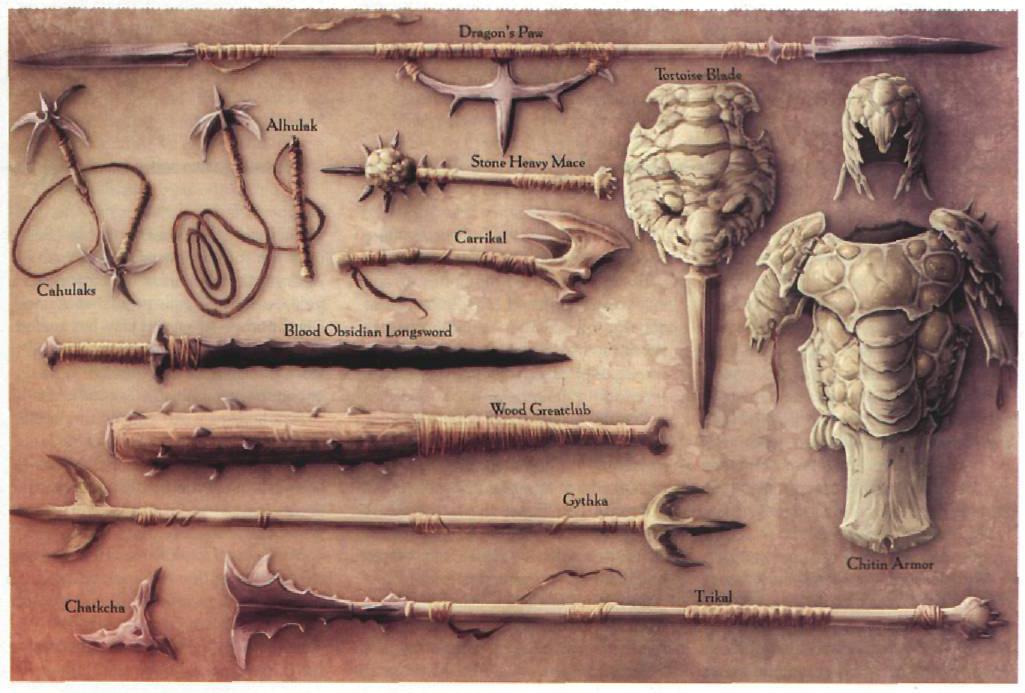 Continuing my series on Dark Sun, it’s time to dig into the currency and equipment of Athas. Since Athas has a limited supply of metal, equipment and coinage work very differently in a Dark Sun campaign as detailed below.

In an effort to provide a complete ruleset, I’ve constructed the rules for equipment and coinage as concise as possible. In general, the equipment and coinage uses the same descriptions as the Fifth Edition Player’s Handbook with changes noted below. If you have questions about how a rule or feature works, you can usually find the answer there.

For simplicity’s sake, I’ve cribbed a lot of the “fluff” from the 2nd Edition AD&D boxed set, changing the stats to conform to Fifth Edition standards where necessary. If it ain’t broke, don’t fix it, etc.

Freemen, villagers, herders, and others who live outside of the nobility trade in goods, bartering for what they need and paying taxes in grain and water.

Members of the nobility trade either in legal rights, such as the rights to a mine, a well, or farmland or even in gold pieces. Only merchants, adventurers, and those offering professional services for hire commonly deal in coins.

Virtually all Athasian city states issue coins minted in tribute to their sorcerer-kings. Also, some independent dwarven communities and some wealthy merchant families mint their own coins when the precious metals are available to them. Though the currencies vary (a gold coin minted in Tyr might be a bit heavier than the square gold
coins that bear the Ryharian family crest), they all fall under the standard exchange rates given in the Player’s Handbook.

The most commonly used coin throughout Atkas is the ceramic piece (cp). Ceramic coins can be manufactured from the most common clay of Athas, then glazed in specific colors and kilned to discourage forgery. The molded shape of ceramic pieces allows them to be broken into 10 separate pie-shaped pieces. Each of these “bits ” is worth 1/10 of a ceramic piece.

The equipment lists in the Player’s Handbook show not only how muck each item costs, but what each item is worth in typical Fifth Edition coinage.

On Athas, the relative rarity of metal increases the value of metal items. Coins themselves are worth more, so fewer Athasian coins are needed to purchase things that aren’t made of metal. However, metal items, because of the scarcity of metal coinage, cost relatively the same number of coins as in other worlds. When Dark Sun characters make purchases from the equipment lists in the Player’s Handbook, therefore, the following rules apply:

All prices listed in this article series or any other Dark Sun article I write already compensate for the rarity of metals.

Transactions, where goods or services are purchased with money, remain quite common on Athas, despite the lack of metals: Athas is metal-poor, not metal-depleted. Coins are a readily accepted means of payment and, considering the increased value of coins, are less bulky to carry around.

Barter is the exchange of goods for other goods: no coins change hands. By its very nature, barter is an age-old ceremony of negotiation. Characters in Dark Sun can enter either a simple or protracted barter.

In simple barter, characters compare the costs of the items to be exchanged and then match the quantities until they are approximately even. For example, Kyuln wishes to exchange his crop of rice for a metal greatsword. On Athas, Kyuln’s rice is worth 2 bits (2 1/10 cp) per pound, and the metal greatsword he seeks is worth 50 gp (5000 cp). Kyuln would have to trade 25,000 pounds of his rice (his entire harvest) to the weaponsmith in exchange for his new metal greatsword. The weaponsmith might not be that hungry.

When a protracted barter begins, the traders spend 10 minutes negotiating the deal. At the end of the 10 minutes, each trader makes a Charisma (Persuasion) check contested by the other trader’s Wisdom (Insight) check.

If a player decides that they do not wish to start with the equipment offered by their class and background, they can start with a number of ceramic pieces based on his or her character’s class. Use the Starting Wealth by Class table in the Player’s Handbook, except the number of funds rolled are ceramic pieces instead of gold pieces. Psions use the cleric starting wealth line.

The weapons commonly found in the brutal lands of Athas consist of obsidian, bone, wood—and sometimes even metal.

The following weapons, because they can be easily made without metal, can be purchased for one percent of their price in the Player’s Handbook and used normally: blowguns (with barbed dart or needle), all bows, all clubs, all crossbows, javelins, lances, pikes, quarterstaves, slings (with sling stones), spears, nets, and whips.

The remaining weapons—because they can be constructed from a variety of materials—vary in cost, weight, damage, and hit probability: battleaxes, greataxes, all arrows, all bolts, daggers, darts, mauls, maces, hammers, handaxes, knives, morning stars, all polearms, sickles, sling bullets, all swords, tridents, war picks, and warhammers.

The Weapon Materials table below indicates the percentage cost and weight of weapons, and modifiers to damage and to hit for the stats in the Player’s Handbook.

In the game and in text, such weapons should always be referred to with their material and make: wooden greatsword, bone sickle, metal dagger, and so forth. As well as adding flavor to battle scenes, this indication helps the GM keep track of what type of weapon is being used.

Nonmetal weapons can be enchanted. However, enchantment is cumulative with the weapon’s to hit modifier. For example, the net modifier for a bone dagger +2 is actually +1.

Nonmetal weapons are prone to breaking. Whenever a weapon deals a critical hit, hits an object or creature made out of a harder material than it, or hits a creature that has immunity to the weapon’s damage type, roll a d20. On a roll of a 1, the weapon breaks.

All forms of armor listed in the Player’s Handbook are available in Dark Sun. They afford the same AC rating, benefits, and penalties described there.

Two facts on Athas conspire to limit the use of metal armor: extreme heat and the high price of metal. A suit of plate armor costs 1,500 gp on Athas, the equivalent of 150,000 gp in any other Fifth Edition campaign setting–at that point, you can probably afford to buy a castle.

Likewise, the intense heat across Athas’ barren surface makes metal armor an unpleasant experience, to say the least. Creatures wearing medium or heavy metal armor in the Athasian sun must make their Extreme Heat checks at disadvantage as detailed in Chapter 5 of the Dungeon Master’s Guide.

Many types of armor can be constructed without metal on Athas, using more readily available materials.

Shields. Shields are mostly constructed with layers of leather stretched over a wooden or bone frame and hardened. Effective shields can also be constructed of chitinous materials scavenged from dead insectoids. Though made of alternate materials, shields on Athas come in the typical varieties: bucklers and small, medium, or body shields.

Leather Armor. Perhaps the most common type of armor used on Athas, leather armor is shaped to the individual wearing it, and then hardened.

Padded Armor. As described in the Player’s Handbook, this armor is made from heavy cloth and batting. Many Athasian warriors prefer padded armor woven from giants’ hair.

Studded Leather, Ring Mail, and Scale Mail Armor. These varieties of armor are constructed using pieces of bone or chitin.

Breastplate, Chain, Chain Shirt, Splint, Half and Full Plate Armor. These types of armor must be made with metal components, making them both expensive and potentially deadly in the day’s heat.

The following equipment is generally available in populated sectors of Athas for the prices shown.

Tun of Water. In most Athasian cities, water is drawn from a collective cistern maintained by the sorcerer-king and his Templars. It is not at all uncommon for the price of water to increase dramatically during particularly dry periods or when the Templars are attempting to extort more money from consumers.

Fire Kit. Though flint is readily available, steel is scarce on Athas. The standard fire-starting kit, therefore, uses a bow and sticks rather than flint and steel.

Erdlu. Erdlus are herd beasts raised by many different cultures on Athas. These large, flightless birds stand up to seven feet tall and weigh around 200 pounds. Their omnivorous diet allows them to graze nearly anywhere and their hardy nature keeps
them alive in harsh terrain. The price of a single erdlu can be as much as double that listed or as little as half, depending upon availability. Erdlu’s eggs are also edible: one egg can fetch 3 bits.

Inix. An inix is a large lizard animal that grows to as much as 16 feet long. Though herbivorous by nature, inix are vicious combatants, attacking with both tail and bite.

Inix trained for riding are also trained not to fight while mounted, for no rider could manage to keep his seat while an inix thrashed its mighty tail. Inix can be fitted with a howdah. Half-giants use them as individual mounts. Inix cannot generally pull wagons because of their lengthy tails.

Kank. Kanks serve as both herd animals and beasts of burden. They are large insectoids, 4 feet high and 8 feet long, weighing around 400 pounds. As herd animals, kanks are durable and easily tended. Kanks are not raised for their meat, which becomes foul-smelling as soon as they die. Instead, they are raised for honey globules produced on their bellies. A single honey globule can bring 4 bits.

As riding beasts, kanks provide effective transportation for a single character (except for half-giants, who use inix for the same purpose). Kanks can be hitched to wagons individually or in teams.

Mekillot. A mekillot is an enormous 6-ton lizard, used as a beast of burden. Each one can carry 8,000 pounds or pull up to 40,000 pounds behind it. Mekillots are hard to control and sometimes turn on their handlers. A mekillot can be fitted with a pack howdah or a
war howdah, carrying several men into combat.

Barding. There are two types of barding for the various beasts of burden on Athas: leather and chitin. Leather barding is made with stiffened leather pads, often reinforced with bone or chitin, and joined together with cloth or soft leather straps.

Chatchka. This thri-kreen throwing weapon is common among the tribes of the steppes. It is a crystal wedge that can be thrown up to 40 yards and, due to its spin and affect upon the air, still return to the thrower if it misses the target. If you make a ranged weapon attack with chatchka and the attack misses, the chatchka returns to you unless it is somehow obstructed.

Gythka. This thri-kreen polearm has wicked blades at either end. The weapon’s thick shaft allows it to be used as a quarterstaff against similarly armed opponents.

Impaler. An impaler is a weapon developed for arena combat. It has a single shaft about 4 feet long with a pair of long pointed blades, splitting to each side and forming deadly “T. ” The weapon can be swung horizontally or vertically, over the head

Quabone. This weapon is constructed from four identical shanks of bone, lashed together to form a radially symmetrical, sword-length rod. With its lightness and crudely sharpened end, the quabone is a fairly ineffective weapon. The quabone is used
in arena situations where combat is intended to draw out for a long period of time.

Wrist Razors. Wrist razors consist of a trio of blades that protrude from a heavy armband. The razors project out over the back of the hand, are extremely sharp, and can be up to 6 inches long. Wrist razors can be worn on one or both forearms.

Next: Magic of Dark Sun