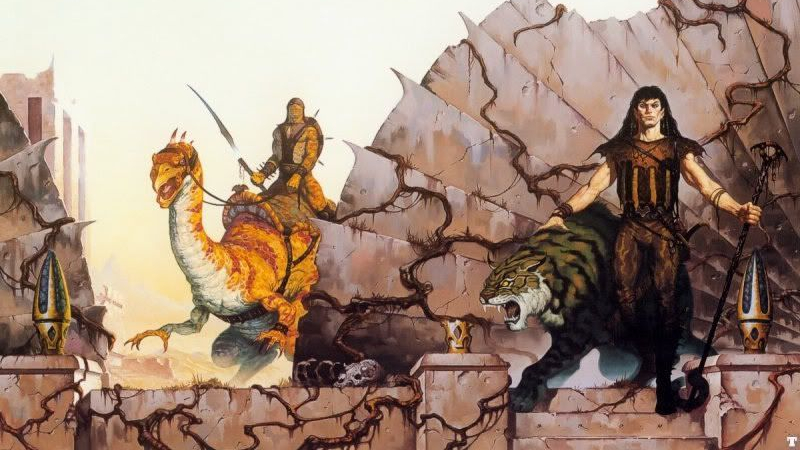 Continuing my series on Dark Sun, it’s time to dig into the backgrounds of Athas. Many of the Fifth Edition backgrounds transition smoothly into Dark Sun with only a few minor tweaks. Some had to be completely removed.

In an effort to provide a complete ruleset, I’ve constructed the background options as concise as possible. In general, the backgrounds use the same descriptions as the Fifth Edition Player’s Handbook with changes noted below. If you have questions about how a rule or feature works, you can usually find the answer there.

As in the other entries in this series, much of the information contained here is cribbed from the 2nd Edition AD&D Dark Sun boxed set. If it ain’t broken, don’t fix it–plus, I can’t sell this information, therefore, it’s free for you to use (until, you know… if and when WotC tells me to remove it).

Typically, Athasian characters are much hardier and tougher by typical Fifth Edition character standards. In addition, they may not be considered “attractive” in the classical sense. Their skin is rough and leathery with blemishes and burns. Water is uncommon, so hygiene is generally poor.

Athasian names pull characteristics from many different “real world” cultures and past civilizations. For humans, half-elves, and half-giants, it’s recommended that you use the random tables from the Appendix B Xanathar’s Guide to the Galaxy, especially names from the following cultures: Arabic, Egyptian, Mesoamerican, Roman, and Spanish. Non-human humanoids might use the names from their respective lists or from those suggested above. Muls use the names from the tiefling lists. Thri-kreen names are usually a series of unpronounceable clicks. When interacting with other races, a thri-kreen may go by a nickname based on his or her appearance or personality such as Clicks, Snap Claw, or Stripe.

In most city-states, there is no distinction made between the positions which men and women may hold, for both sexes seem equally capable of the treachery required to attain and hold power. At least two sorcerer-kings are in fact sorcerer-queens, and women rise or fall as fast as men in the ranks of the Templars. Many noble houses are represented on the monarch’s advisory council by matriarchs, and the control of most merchant houses passes to the eldest competent child, whether it is a son or a daughter.

The same generally extends to the villages, nomads, and raiding parties that live outside of Athas.

Nearly all Athasians are much larger than their counterparts from other worlds, a byproduct of the harsh landscape.

For dwarves, elves, half-elves, halflings, and humans use the Random Height and Weight table from the Player’s Handbook. And for muls, use the same line as humans. Reroll any results of 1 or 2 on any of the height modifier or weight modifier dice.

For thri-kreen and half-giants, use the table below.

Like all other creatures in the multiverse, creatures living on the world of Athas have alignments, too. Due to the severe and dangerous environment that Athas presents characters, most creatures are out for themselves and lean towards neutral and evil alignments. There are good creatures, however, those who hope to bring light to the dying world. Unfortunately, many of these creatures are few and far between.

Many of the languages listed in the Player’s Handbook are spoken on Athas, and the Common tongue remains the language of trade and diplomacy among the Tablelands.

Nearly all humanoids living in Athas are illiterate, especially in city-states where reading and writing is generally outlawed. Those caught reading and writing are either forced into slavery or executed by the Templars. However, any time a character is allowed to learn a new language, they can choose literacy instead, granting them the ability to read and write all of the languages that they know. Characters with the noble or sage background automatically can read and write.

Although Athas is a wasteland, it is not an empty wasteland. The world is fairly crawling with humans, demihumans, and humanoids. Every group has found a different way to survive in this barren and harsh environment. In general, most have found that all cultures seem to fall into one of seven basic categories. There are city dwellers, villagers, merchant caravan dynasties, herdsmen, raiders, hunter-gatherers, and hermits.

In Fifth Edition, each of the backgrounds (with the exception of sailor) fit in somewhere with the Dark Sun campaign setting. Refer to the descriptions below for details on the backgrounds and their place in Athas.

Acolytes spend their life in the service of one of the four elements (air, earth, fire, or water), all of Athas itself as a Preserver, or at the behest of a sorcerer-king. There are no divine powers in Athas, therefore, the acolyte must select one of the aforementioned areas of worship. Acolytes devoted to Athas or the elements may select the Arcana or Nature skills in place of Religion.

Charlatans are especially common among city dwellers, villagers, and especially merchant caravan dynasties. Living simpler lives, herdsmen, raiders, hunter-gatherers, and hermits may not have much use for skills of deception and sleight of hand. Charlatans in Athas operate much the same way they do anywhere else: turning wants and desires against the foolish and unobservant for personal profit and gain. In cities, Charlatans can be freemen, slaves, merchants, nobles, and possibly even the sorcerer-kings themselves.

Criminals are common among city dwellers and villagers. Merchant caravan dynasties may employ their own thieves, cutthroats, and smugglers, but it’s rare that merchants themselves are criminals–unless that’s their trade, of course. Raiders may work as criminals, but often prefer the direct approach to situations.

Entertainers are usually the freemen of cities (and sometimes bards) or slaves that act as entertainers for nobles and sorcerer-kings. Villages and herdsmen may have their own entertainers, as may raiders.

Folk heroes can come from any stock or social standing. However, folk heroes that operate in cities tend to irk sorcerer-kings who see them as troublesome. When a folk hero’s story starts making its rounds among the denizens of city-states, the sorcerer-king’s Templars are quickly dispatched to quell the potential upstart.

Gladiators are very popular in Athas but are almost always slaves owned by the nobility. The wealthiest templars and most noble families maintain stables of men and women picked and trained for their fighting prowess. These slaves are sent to fight in the gladiatorial stadiums for public entertainment. Their owners, sitting in private boxes perched high above the arenas, often wager considerable sums on the outcome of these battles. More than one noble has been sold into slavery for not being able to pay the debts he or she incurred when a favored gladiator fell.

Guild artisans are usually freemen who live and operate in the city-states, but may also work in villages, among herdsmen, as hunter-gatherers, or by themselves as a hermit. Freemen artisans in the cities use the traditional guild membership feature. However, those in villages and among rural humanoids enjoy the same benefits of the folk hero’s rustic hospitality feature. Among the merchant dynasties, there are guild merchants.

Hermits come in all races and from all walks of life. They live alone in some forlorn place far away either by their own choice or because they are outcasts. Most survive through a combination of foraging and herding, though some are also hunters. Hermits are seldom nomads, for even the most barren patch of Athas can meet the survival needs of a solitary man, providing he is skilled at survival in the desert and is not picky about what he eats. Usually, hermits live near a source of water, but their residences are not obvious or easy to find.

Nobles control the farms and the water of the cities. Usually, each noble family picks a senior member to sit on a parliamentary council. In theory, these councils act as advisory bodies to the monarchs, but in reality, they are little more than administrative bodies through which the king passes his commands to the aristocracy. No matter how opposed the nobles might be to the king’s policies, they can always be counted on to protect the city (as invasion would strip them of their landed rights). For this reason, every family is allowed to maintain a standing army of slave soldiers, with the young men of the family serving as officers. In an emergency, the king can freely call upon these armies to supplement his own troops.

Outlanders live away from the comforts of town and technology, either by the privilege of birth or by choice. Many herdsmen, raiders, hermits, and hunter-gatherers live as outlanders. Some villagers, especially those outside of the grip of a city-state, may also be outlanders.

Sages that live in cities are often always templars, nobles, or defilers employed by the sorcerer-kings. Because knowledge is power, and the most efficient way of passing on knowledge is through writing. Still, many freemen and slaves learn how to read and write in secret. Those who are exceptional at such activities may become sages. Sages that are not protected by the Templars put their lives at great risk.

Sailors do not exist in Athas, nor do pirates. Without large bodies of water to sail upon, there are no ships to sail.

Soldiers are usually slaves working for the nobles or sorcerer-kings. Some soldiers are also mercenaries who work for the merchants. Freed slaves or those who’ve escape may also have a background as a soldier which they use to help others in need of fighting skills.

Spies are employed by sorcerer-kings, nobles, and merchants. Many spies are excellent at adopting the personality of an entertainer or some other role that makes them invisible in social settings.

Urchins are common in the city-states, usually as freemen who cannot find gainful employment or escaped slaves. They know the cities well and are excellent at surviving in the urban environment.

Next: Equipment of Athas