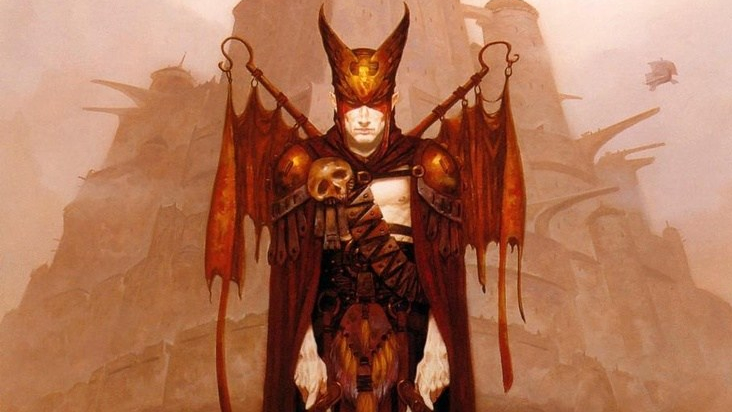 Continuing my series on Dark Sun, it’s time to examine the magic of Athas. Magic used on Athas is shaped and molded by the harsh realities of that world. The influences of
foul defilers, the valiant efforts of preserves, and the corrupt researches of sorcerer-kings have left their mark upon the wizard’s trade. This chapter highlights important differences between Dark Sun and magic in other Fifth Edition game worlds

In an effort to provide a complete ruleset, I’ve constructed the rules for magic as concise as possible. In general, the spells and magic items use the same descriptions as the Fifth Edition Player’s Handbook with changes noted below. If you have questions about how a rule or feature works, you can usually find the answer there.

In order to save time and focus on the important parts, I’ve cribbed from the original 2nd edition box set. If it ain’t broke, don’t fix it.

The sources of magical energy on Athas are very different from those in Fifth Edition campaign worlds. Athas is a world without deities, where clerics worship the elemental powers themselves. Despite the brutality that seems infused in its soil, Athas is a fragile world, where the very existence of wizardry magic can disrupt and destroy the land’s ability to support life.

Some spells on Athas are affected by the world’s environment and constraints. Make the following adjustments to the spells found in the Player’s Handbook. The spells are listed in alphabetical order.

In Dark Sun, a cleric is able to contact powerful elemental beings from the elemental planes such as genies or elder elementals with this spell.

If your concentration is broken when summoning a water elemental, the elemental disappears.

To change precipitation levels, it takes 1d4 x 20 minutes for the new conditions to take effect and the highest precipitation stage possible is 4 (rain, hail, or snow).

In Dark Sun, the Create Water function of this spell can only create up to 5 gallons of clean water within range in an open container. And when you cast this spell using a spell slot of 2nd level or higher, you create 5 additional gallons of water. The Destroy Water function remains unchanged.

When you cast this spell, you only create 15 gallons of water on the ground or in a container within range.

You gain the service of a familiar, a spirit that takes an animal form you choose: bat, beetle, cat, pseudodragon, rat, scorpion, or snake.

The steed takes on a form of a trained kank, and it must either be a celestial or a fiend (your choice).

This spell has no effect on the trees of life. And since defiled areas have no plant life left, this spell doesn’t work in those areas.

Magic items are affected by the nature of Athas, as well. Use of magical items never causes a defiling effect on the surrounding grounds. However, defilers who create magical items do cause destruction at the time of manufacture.

On Athas, potions are drawn from the juices of fruits.

The process of setting a spell to a scroll inherently strips the spell of defiler or preserver characteristics. Thus, spells cast from scrolls do not cause defiler destruction.

Most items function just as described in the Dungeon Master’s Guide. Such items rarely consist of metal, but rather are fashioned from the finest alternate materials available.

All magical weapons found as part of a treasure are metal or have metal components. Nonmetal weapons can be enchanted as well, but magical adjustments must still take into account the inherently poorer quality of the material used as noted in the section on Equipment.

Next: The City of Tyr