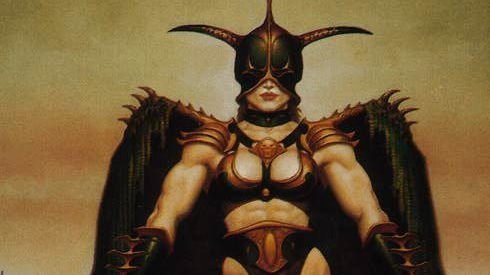 To round out my series on Dark Sun, I figured I’d go back and give the actual rules for creating a Dark Sun character. Plus, this is as good as place as any to list the table of contents for my Dark Sun material here on the site which you can access below.

In order to provide a complete ruleset, I’ve made the details in this player guide as concise as possible. More often than not, if you have a question regarding the rules refer to the Fifth Edition Player’s Handbook for an answer.

How to Create a Character in Dark Sun

Creating a character in Dark Sun is very similar to the way it’s done in Fifth Edition. Here are the basic steps.

First, select a race. The races available in Athas are different than those normally available in Fifth Edition. They are dwarf, elf, half-elf, half-giant, halfling, human, mul, and thri-kreen.

Dark Sun’s harsh arid setting has different rules that pertain to classes, too. Many remain the same. Others have some minor to major adjustments or limitations on their subclasses. And some classes–such as bards, monks, paladins, and warlocks–are completely removed from the setting.

Athas is a cruel, mean world, punished from above by a hot sun and below from all manner of horrible creatures, some monstrous and alien but most humanoid and familiar. This world has bred tougher creatures; it’s survival of the fittest under the dark sun. As such, ability scores are determined differently.

Here are the methods for determining ability scores in a Dark Sun campaign setting:

The highest an ability score can be in Dark Sun is 22.

Athasian characters have alignments, ideals, bonds, flaws, and backgrounds just like any other Fifth Edition character. In addition to the backgrounds, a player should also decide where their character comes from. Typically, there are seven origins in Athas: city-dweller, villager, herdsmen, raiding tribes, hunter-gatherers, hermits, and merchant caravan dynasties. Within these origins are the traditional Fifth Edition backgrounds identified in the Player’s Handbook.

Athas is a metal-scarce world, so equipment works quite differently. For example, heavy, metal suits of armor are not only rare but not even worth wearing because they a) are very impractical in 120-degree+ weather and b) worth hundreds of thousands of gold. Replacement options for armor are given under the class details. Weapons can be made from bone, wood, obsidian, or stone, but have particular disadvantages. For example, it’s much more common to see a longsword made of wood than one made of steel.

Finally, what reasons for coming together do you and the other characters have? Were you all slaves together? Or perhaps you’re part of the same hunter-gatherer tribe? Or maybe each of you come from a very different background and were pulled together for a common goal. Dark Sun is harsh, but varied world, filled with plenty of opportunity for adventure.

Dark Sun is not for the faint of heart. Even with higher starting ability scores, the threats faced in the city-states, dunes and rocky barrens are tougher than average. It is recommended that characters start at the 3rd level to compensate.

Listed below are all of the details for players and GMs to run a Dark Sun campaign in Fifth Edition.

Thumbnail art by Wizards of the Coast/Brom.