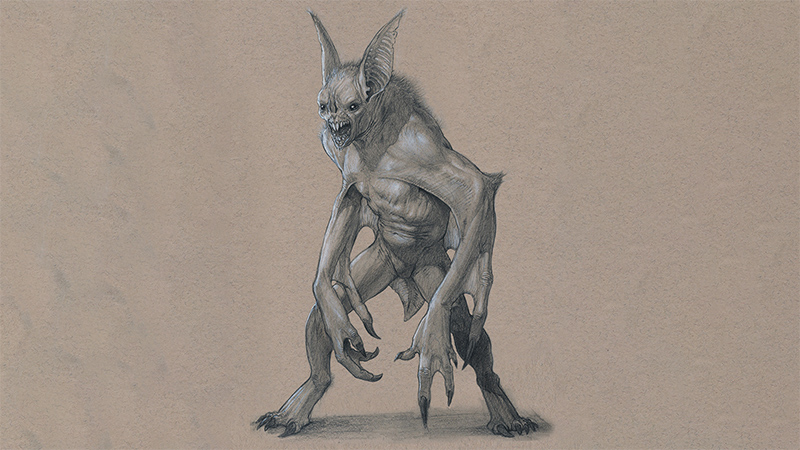 I ended up heading to bed early last night and managed to get a decent night’s sleep. So I’m up-and-at-them early today to work on another third edition monster conversion before I start my work day (which is also writing, of course).

Who are the desmodus?

The desmodus are a race of large, bat-like humanoids that live underground. They’re covered in reddish fur and have long arms and short legs, kind of like a big bat-gorilla-man. Notably, desmodus have a sonic scream attack that comes in two flavors: a targeted ray and a wave effect that stuns everyone within 30 feet.

A simple folk, desmodus don’t care much for money and possessions. However, they do create a lot of cool tools and items specific to their uses. Desmodus are really into bats, too. They train them, raise them, and use them for just about everything: hunting, guarding, and riding into war.

Arranged into small, independent family groups, desmodus eschew complex social organizations. The individual families do as they please, usually with the eldest members of the unit acting as the ruling body.

Echolocation. The desmodu can’t use its blindsight while deafened.

Gallop. If the desmodu is not holding anything, its movement speed increases by 20 ft.

Keen Hearing. The desmodu has advantage on Wisdom (Perception) checks that rely on hearing.

Speak with Bats. The desmodu can communicate simple concepts to bats when it speaks in Desmodu.

Vibrations. The desmodu emits sonic vibrations that affect those around it. The desmodu can continue to use one of the effects below until its concentration is broken (as if concentrating on a spell). In addition, the desmodu can switch which effect it uses as a bonus action on each of its turns.

Multiattack. The desmodu makes three attacks: two with its claws and one with its bite.

Bite. Melee Weapon Attack: +7 to hit, reach 5 ft., one target. Hit: 9 (1d8 + 5) piercing damage.If the target is a creature, it must succeed on a DC 16 Constitution saving throw or take 2 (1d4) slashing damage at the start of each of its turns due to a fierce wound. Any creature can take an action to staunch the wound with a successful DC 13 Wisdom (Medicine) check. The wound also closes if the target receives magical healing or after 1 minute passes.

Screech (1/day). The desmodu utters a thunderous screech. It can choose one of the following effects:

Spread the good word about all these zany monsters I’m creating. Just click one of the buttons below… it only takes a minute and your friends will love you for it. Seriously, they might just hoist you on their shoulders and carry you through the streets chanting your name.

The Desmodu is free for you to use in your Fifth Edition Dungeons & Dragons campaigns. Just not commercially.

Art by Mavros-Thanatos on Deviant Art.