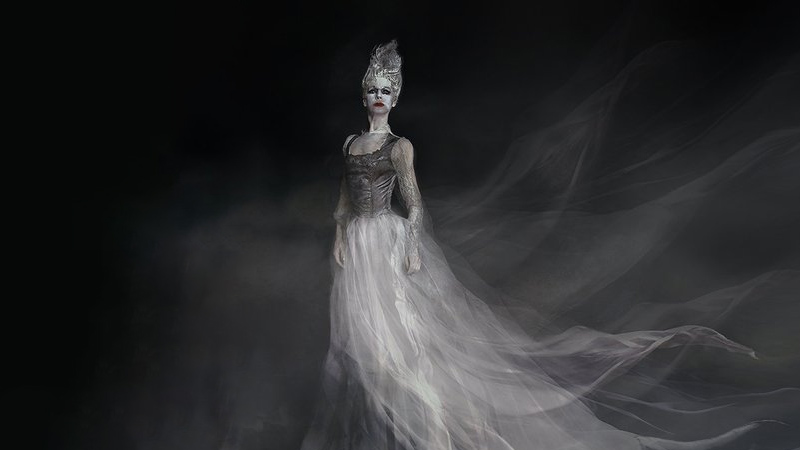 From Honduran legends: la sucia tells the popular story of a beautiful young woman denied marriage at the altar because she was unbaptized. She then wandered out of mind, never removing her increasingly filthy wedding dress until she died of heartbreak after her suitor married another. The story follows that she appears in beautiful form to lure men roaming drunk by rivers and streams, so enraptured by her beauty they follow her until she changes into a filthy horror that drives men crazy.

The filthy bride is more than a mere ghost, but the embodiment of cultural rage from the women of Copan. Whenever feelings of frustration or disrespect arise among the women in a community, la sucia appears to enact vengeance on their behalf; whether the women want her to or not. Entire villages have had their male populations murdered or turned mad by the powerful sucias, who are driven by a compulsion to rid an area of all males, young and old alike.

Subjective Beauty. La sucia has a constant illusion that makes her appear different depending on who is viewing her. Any humanoid that can see la sucia sees her as an overwhelmingly attractive mate. While appearing this way, la sucia has advantage on Charisma (Deception, Intimidation, and Persuasion) checks against the target. If a creature uses its action to examine la sucia, the creature can determine that it is an illusion with a successful DC 15 Intelligence (Investigation) check. If a creature discerns the illusion for what it is, la sucia appears in her true form, which is a horrific bride wearing a filth-encrusted wedding dress.

Kiss. Melee Weapon Attack: +5 to hit, reach 5 ft., one willing creature, or a creature that is grappled by la sucia, incapacitated, or restrained. Hit: the target’s Wisdom score is reduced by 1d4. The target goes insane and becomes a marido sucio if this reduces its Wisdom to 0. Otherwise, the reduction lasts until the target finishes a short or long rest.

To complement la sucia, I’ve created los maridos sucios on my Patreon page. It’s 100% FREE for you to view, and open to all readers.

There will be enough content coming out on the Patreon page to fill at least one 100-150 page book every month which would typically retail for $20 printed, or $10 digital; so this is a massive value!