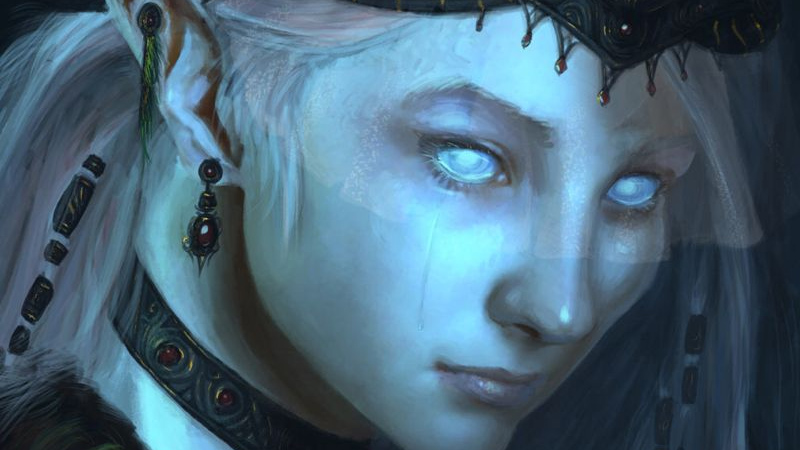 The zule are a race of villainous elves that live north of the Rio Norte. They have a coarse relationship with the Mexjicano folk of northern Alberia, and tensions are always high. In recent years, the northern Governors of Mexjico have made deals with the zule of Vårtheim to allow the zule to mine the lands (in exchange for technology and gold) for the glowing green rock known as heartstone (or piedra del corazón to the Mexjicanos).

Standing 6 to 7 feet in height, zules are taller than other elves. They have pale skin that is unusually cold to the touch and their icy blue eyes have a faint glow to them. This is how they got their name, zule, a shortened form of “aquellos con ojos azules”, or the “blue-eyed ones.” Zules have white or platinum blonde hair that they often keep long or braided. Immune to cold temperatures, zules dress in thin, light garments or sometimes nearly nude. Only when zules travel south towards the warmer climes do they dress more appropriately, wearing grey or black armor that doubles as a containment suit to keep them cool.

Living exclusively in cold, often-lifeless environments, zules have difficulty functioning in warm climates. Furthermore, extreme heat can kill them. Thankfully, this flaw is likely the one thing that halted their aggression during the wars of the mid-19th century. However, in recent years, zulish engineers have crafted life support suits that make it possible for zules to travel into the hot temperatures of Alberia and beyond. And there are rumors that their geneticists are looking for ways to create zule-hybrids capable of traveling without the use of a containment suit at all.

Most zule are evil. However, there are a few zule who’ve grown empathetic to the plights of the other humanoid races. While these–dare we say–“friendlier” zules can still be quite rude, they can occasionally be amiable. Of course, these zules are rare, and most live in exile among the southern reaches of Vårtheim. Regardless of their claims, even these zules are met with mistrust by the Alberian people.

All zules are born with an innate ability to communicate with machines, no matter how simple the machines might be. This supernatural gift gives them an advantage in creating technology that manages their vast northern empire. In addition, most zulish warriors arm themselves with strange ranged weapons capable of inflicting searing damage to their targets. The zules call these weapons ljuspistols (light guns). Like most of their technology, ljuspistols are powered by heartstone.

Zules have the following traits in common, in addition to the traits they share with other elves.

Truesight. Zules can see the world for what it is. Up to 60 feet, your zule can see in normal and magical darkness, see invisible creatures and objects, automatically detect visual illusions, and succeed on saving throws against them, and perceive the original form of a shapechanger or a creature that is transformed by magic. In addition, you can see into the Ethereal Plane within 60 feet.

Resistance to Cold. You are resistant to attacks that deal cold damage.

Speak With Machines. You can magically imbue a machine within 30 feet of you with limited sentience and animation, giving it the ability to communicate with you and follow simple commands. You can question the machine about events that have occurred within 30 feet of it within the past day, gaining information about creatures that have passed, weather, and other circumstances. If you target a construct, you can communicate with it as if you and the construct share a common language. However, you gain no magical ability to influence the construct. Once you use this ability, you can not use it again until you finish a long rest.

Zulish Technology. You are proficient with zulish weapons and armor.

Languages. You can speak, read, and write Zulish.

For all intents and purposes, zulish technology is considered alien technology to anyone but zules or those already proficient with it (see the Dungeons Master’s Guide, p268).

Zulish Containment Suit. A zulish containment suit costs 750gp and weighs 20 lbs. and offers 12 + Dex modifier Armor Class to the wearer. In addition, it houses a cooling system that allows heat sensitive creatures, such as the zule, the ability to travel into warm climates. Unless the creature wearing the containment suit is immune or resistant to cold damage, the wearer must make checks against extreme cold. The suit is powered by a single heartstone fragment which loses its potency after 10 days of continuous wear.

Zulish Ljuspistol. The pistol is a ranged firearm that has a range of 40/120 and deals 2d6 necrotic damage to a single target. The ljuspistol requires ammunition, a single heartstone fragment which loses its potency after 50 shots.

There will be enough content coming out on the Patreon page to fill at least one 100-150 page book every month which would typically retail for $20 printed, or $10 digital; so this is a massive value!