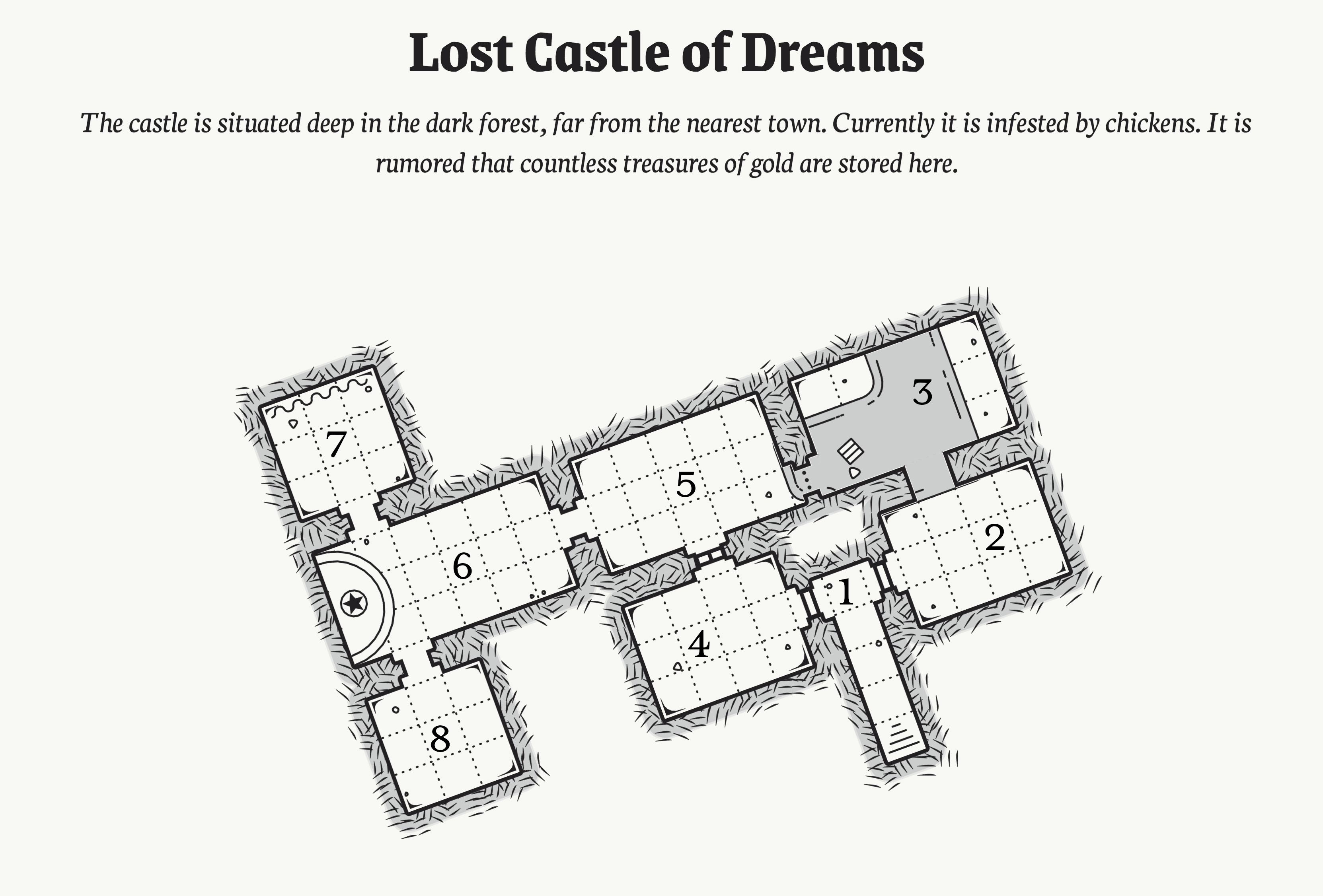 Lair of the Chicken Lich

The Lost Castle of Dreams is situated deep in the forest, far from the nearest town. Currently, it is infested by chickens. It is rumored that countless treasures of gold are stored here.

Where to Add This Encounter

This side trek is designed for three to seven 5th- to 10th-level characters and is optimized for five characters with an average party level (APL) of 9.

This unusual encounter can be placed as a side quest or at the end of a major quest. While set in the world of Omeria by default, it can easily be placed in any campaign setting that fits the description (dark forest, far from town, etc.)

The chicken lich was once a powerful spellcaster named Zeek. Zeek intended to have his soul stored in a decorative golden egg. Unfortunately, the egg went missing the day of the immortality ceremony and one of Zeek’s henchmen substituted a normal chicken egg. The ritual went awry and three weeks later, Zeek hatched as a newborn chick. Zeek still had his memories and spellcasting abilities but was now in the body of a chicken. Needless to say, Zeek immediately disintegrated the henchman who caused the mishap. The rest of Zeek’s disciples and henchmen were then turned into chickens to share in Zeek’s misery.

Unless stated otherwise in the individual room descriptions, the chicken lich’s lair has the following features:

Dimensions & Terrain. The chicken lich’s lair is a cellar where the top layers have long since been swallowed by a primordial forest. Creeper vines run down the walls and onto the cracked pavers in the ancient floors. Inside the cellar, the ceilings are roughly 15 feet high and braced with ancient, rotten timbers. Old, moldy tapestries of some long-forgotten royal family still hang from the walls.

Doors. What few doors there are have been left open, granting access to Zeek’s henchchickens. In some locations, however, the doors are protected with traps, as noted in the individual areas.

Lights. With the exception of area 1, continual light spells have been cast all around the establishment.

Sounds & Smells. The place reeks. Mold coupled with chicken feces attacks the nose immediately upon entry. Then there’s the sound of clucking throughout.

Of Chickens and Men

The Chicken Lich’s lair is ruled by Zeek and his henchchickens.

Zeek, The Chicken Lich uses the archmage stat block with the changes described for chickens below.

Zeek’s disciples use the mage stat block with the changes described for chickens below.

In addition to their own stat blocks, the chickens have the following changes:

What Does Zeek Want? Ultimately, Zeek wants to be left alone to his own devices. Sometimes, his needs cause trouble—for example, he may require the blood of a virgin to complete a spell. And he’s been known to accidentally open doors to the Other here and there. This events draw attention to adventurers.

What Does Zeek’s Henchchickens Want? Overall, most of Zeek’s henchchickens are okay with their current predicament. After all, the work is good and there’s plenty of seeds to go around. However, some do long to become human again.

Finding the actual entrance into the Lost Castle might prove difficult for the characters as they travel through the forest. However, the telltale sign of chicken prints might give away its location.

The stairs leading into the castle’s old cellar are terribly overgrown and count as difficult terrain.

Trap: Hold Person Glyph. At the bottom of the stairs, Zeek has set a trap. Any creature that steps onto the bottom step without disarming the trap automatically triggers it. The glyph targets the creature that triggered it with a hold person spell (DC 17). Noticing the glyph requires a successful DC 17 Intelligence (Arcana) check, then a second successful DC 17 Intelligence (Arcana) check to disarm it. Creatures that are no proficient in the Arcana skill cannot find or disarm the trap.

The trap also alerts the chicken disciple and shield guardian from area 4. The pair arrive 1 round after the glyph is triggered.

Stoneshape Door. The entrance to area 2 is blocked by a wall created by the stone shape spell. It is clear that there was once a door there that has since been bricked up.

Zeek keeps those who’ve wronged him or those he finds important here. Roll randomly or choose one of the following NPCs from the Zeek’s Prisoner table to determine the identity of the prisoner.

Stoneshape Door. The door leading back to area 2 is blocked by a wall created by the stone shape spell (the same one described in area 1). It is clear that there was once a door there that has since been bricked up.

Stagnant water pools in the majority of this room.

Cell Bars. Old, rusted bars give anyone standing in area 5 a clear view of this area.

Double Door Riddle. A creature that steps in front of the set of double doors is stopped by a magic mouth that appears on the wall over the door. The mouth looks like a chicken’s beak. It asks the following riddle:

“To proceed, answer this riddle. Answer wrong, and you will find death.

If the mouth has any daughters, there will always be two statements which are true. Therefore, the correct answer is “no daughters.”

Failure to answer the riddle correctly causes the mouth to cast a power word kill spell on the answerer. Then, the door arcanely locks and will not open for another 24 hours, at which point it asks the question again. While locked, the door requires a DC 25 Strength check to break open or a DC 25 Dexterity check using proficiency in thieves’ tools to unlock. The doors have AC 20, 50 hp, threshold 10, and immunity to poison, psychic and as well as bludgeoning, piercing, and slashing from nonmagical attacks.

If the prisoner saved from area 4 is the mage or the chicken henchmen, it will automatically know the right answer.

Treasure. The belongings of the prisoner kept in area 4 are in this room. To determine the nature of the belongings, refer to the Prisoner’s Belongings table below using the identity of the Prisoner as determined by Zeek’s Prisoner table (see area 2).

Two chicken disciples and three swarms of chicken guardians are in this area. They can see into area 3, therefore, if an intruder enters that area without being careful, the entire complex will be on high alert.

He keeps his time stop spell handy in case he needs to flee to area 8, which he can defend with a wall of force long enough to gather the most valuable treasure and teleport away.

This area is where Zeek sleeps. The floor is covered in hay. Unlike the other chickens who reside in the Lost Castle of Dreams, Zeek keeps his regular areas free of his own droppings.

All of Zeek’s treasure is in this room contained in a stone sarcophagus measuring 10 feet by 4 feet.  If Zeek must flee to this room to escape intruders, he can easily teleport away with this sarcophagus.

Treasure. The sarcophagus holds the following treasure: 13,500 gp and 1,500 pp in linen bags, 10 gems worth 1,000 gp each, +1 chain mail, +2 wand of the war mage, and a sword of vengeance. The wand of the war mage is cursed. Any creature that attunes to the wand permanently polymorphed into a chicken. While a chicken, the creature’s size becomes tiny, its Strength score becomes 2 (-4) and it can’t wear or carry anything. To change back into a chicken, a greater restoration spell must be cast upon the character.

Zeek is over a hundred years old and plans to see his 200th birthday. He will try to escape if he feels that the odds are against him and failing that, he’ll try to cut a deal with the adventurers. If he does escape, he won’t take the setback lightly. Almost immediately, The Chicken Lich will learn everything it can about those who raided his Lost Castle and use that information to seek vengeance. A devious chicken, Zeek isn’t above capturing loved ones, framing the characters, ruining the characters’ reputation, or destroying whatever else is important to them.