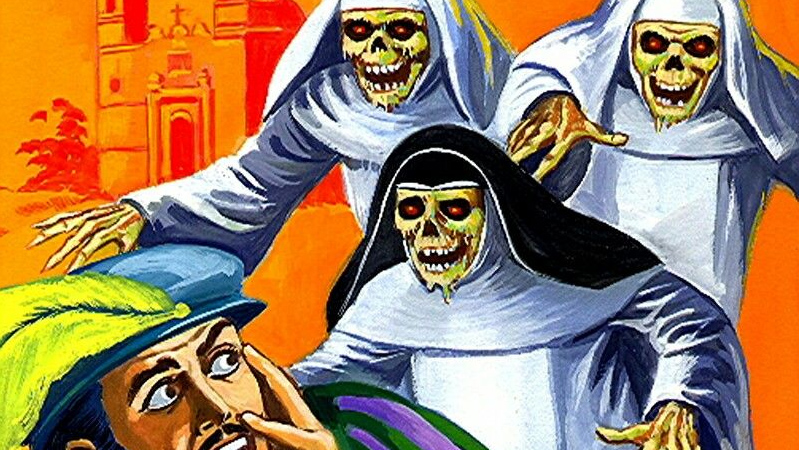 Not all followers of Jesucristo are good. There are those who believe that their God’s true power lies within his resurrection and that he is more of a spirit of vengeance than a benevolent martyr. Of course, an entire religion cannot be villainized because of the actions of a few extreme outliers. Regardless, the members of La Iglesia de Resurrección are a force to be reckoned with throughout all of Alberia.

Acting as faithful disciplinarians of La Iglesia de Resurrección are the monjas malvadas. These undead nuns haunt the labyrinthine tombs below the old desert monasteries, driven by an overwhelming compulsion to torture the faithless.

Undead Fortitude. If damage reduces the monja to 0 hit points, it must make a Constitution saving throw with a DC of 5 + the damage taken, unless the damage is radiant or from a critical hit. On a success, the monja drops to 1 hit point instead.

Claws. Melee Weapon Attack: +4 to hit, reach 5 ft., one target. Hit: 4 (1d4 + 2) slashing damage. If the target is a creature, it must succeed on a DC 12 saving throw or take 2 (1d4) slashing damage at the start of each of its turns due to a ghastly wound. Each time the monja hits the wounded target with this attack, the damage dealt by the wound increases by 2 (1d4). Any creature can take an action to staunch the wound with a successful DC 12 Wisdom (Medicine) check. The wound also closes if the target receives magical healing.

The nuns did not come into existence on their own, rather, they were created by the powerful magic of a padre nigramonte (Necromancer Priest).

You can learn more about Padre Nigramonte over on the Patreon page.