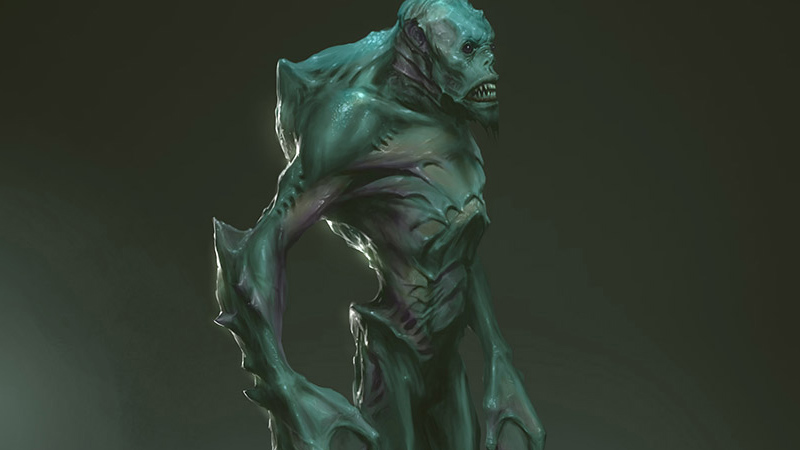 A popular tale among Cuzcatl fisherman, El Tabudo is also known as The Man With Big Knees. According to legend, he was once a wealthy fisherman who was one day taken by the sea and eventually reappeared as something more fish than man, his signature being his large, knobby knees.

He now awaits all visitors to lakes and lagoons, appearing to people as a humble fisherman in order to win over their trust and confidence so that he can lure them out to the middle of the lake. Once he gets his victims where he wants them, he reveals his true appearance. Cuzcatl’s coasts are full of delicious fish, so beware of the Man With Big Knees the next time you go out to catch your meal!

Note: el tabudo works perfectly as a “Creature from the Black Lagoon” parallel. I previously covered the creature (El Monstruo de Laguna Negra) in another post, so here it is seperated out from that list. If you wish to add in the “shapechanging” feature, use the variant block after the listing.

Limited Amphibiousness. El tabudo can breathe air and water, but he needs to be submerged at least once every 4 hours to avoid suffocating.

Some tabudos have the ability to assume the form of a humble fisherman to trick their prey. Add the following action for tabudos that use the fisherman disguise:

Illusory Appearance. El tabudo covers itself and anything it is wearing or carrying with a magical illusion that makes it look like another creature of its general size and humanoid shape (typically a fisherman). The illusion ends if el tabudo takes a bonus action to end it or if it dies. The changes wrought by this effect fail to hold up to physical inspection. For example, el tabudo could appear to have smooth skin, but someone touching it would feel it scaly flesh. Otherwise, a creature must take an action to visually inspect the illusion and succeed on a DC 15 Intelligence (Investigation) check to discern that el tabudo is disguised.

Tabudos are part of the Mesoamerican fantasy campaign setting I’m creating for Patreon, but free for you to use in your own Dungeons & Dragons Fifth Edition campaign settings.