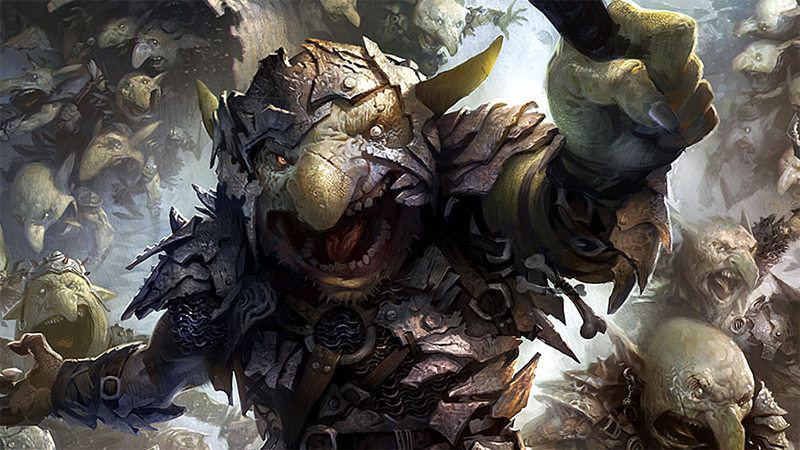 What more is an ogre other than a meat shield for weenies? They’re the brute’iest of brutes. High Strength and Con, lousy Dex, lousier Intelligence and Wisdom (yet, somehow speak two languages, but I digress).

Now, I did enjoy the ogre entries in Mordenkainen’s Tome of Foes. The folks over at Wizards dished out four ogre variants which more or less amount to:

Other than a Dex upgrade for the ogre bolt launcher (a 12, woo) and some armor bonuses, they’re still ogres. Keith Ammann’s recent article on Ogre “tactics” more or less states the obvious (in his typical artful and well-written manner, mind you) when it comes to these guys: battering ram and chain brutes are area control, howdahs are mobile protection for ranged weenies, and bolt launchers are… uh… useless.

What sort of help do 5e ogres need?

Most canny Dungeon Masters know that one monster is never a challenge when it comes to fighting PCs. One monster–especially something as dumb and “bash bash bash!” as an ogre–is going to get crushed quick.

At the same time, you don’t want to overpower the PCs either. It’s all about that balance. And if you can challenge your PCs by doing more with less, you’ll accomplish just that.

TL;DR: never put an ogre by itself. Even multiple ogres is a waste of good encounter XP.

Instead, pair them up with creatures that complement them, ie make up for their many weaknesses.

Again, they’re meat shields. Pure and simple. If played right, they should only ever want to thump things with their fists and clubs. So how do you (and your other monsters) motivate them to do something other than that?

The goblin brute tamer knows that the only way to motivate an ogre is with pain, fear, and hunger, and it uses all three to remarkable effect. Of course, goblin brute tamers live relatively short lives (even by goblin standards) as they’re often crushed by the very same creatures they push too far.

The brave (or insane) creatures that work the ogre howdahs realize that ranged attacks aren’t always the easiest thing to do when they’re sitting in a back of a howdah. Plus, if the howdah goes down, chances are, they’re going down, too. Thus, kobold howdah hotshots are experts at keeping howdahs swinging and standing. These clever buggers use all sorts of devilish devices to keep themselves (and their ugly fortress bearers) high in the sky.

One of the stranger creatures to come out of the Inner Planes are the symbiotic creatures known as huggies. Any time a huggy touches a creature that isn’t an elemental, construct, or undead, the creature temporarily becomes an elemental. This may seem like a sweet gesture on the huggy’s part, but in actuality the huggy feeds on the transference of organic material into elemental energy, slowly killing the host until nothing remains. For this reason, Elementalist wizards like to pair huggies with the more, uh… expendable dungeon denizens to maximum effect. Ogres are no exception. As with most elementals, there are four types of huggies: rock huggies, flame huggies, water huggies, and wind huggies. The statistics for the flame huggy is included below. A quick note to summoners: huggies are insanely jealous and despise other huggies, especially huggies of different elemental types.

Finally, the Unseelie quicklings realized at some point in the distant past (that’s about two months ago for them) that the quickest way for them to move across the battlefield wasn’t by zooming across it like some sort of fast-moving putz, but by hopping a ride on the ammunition of larger creatures. While most of their practice has been with Fomorians and their oversized ballistas, quickling inflitrators have learned to cling onto the rocks of giants and the bolts of ogre bolt launchers as well. Once within range, they parachute into the target location and make a mess of things while the rest of their allies play catchup.

Cruel Command. The goblin makes a whip attack against a Large or Huge beast, humanoid, giant, or monstrosity of Intelligence 6 or lower. If the attack hits, the creature must succeed on a DC 11 Wisdom saving throw, or the goblin causes it to use its reaction either to make one weapon attack against another creature the goblin can see or move up to 10 feet in a direction of the goblin’s choice. If the creature passes its Wisdom save by 5 or more, it may use its reaction to attack the goblin instead.

Sunlight Sensitivity. While in sunlight, the kobold has disadvantage on attack rolls, as well as on Wisdom (Perception) checks that rely on sight.

Pack Tactics. The kobold has advantage on an attack roll against a creature if at least one of the kobold’s allies is within 5 feet of the creature and the ally isn’t incapacitated.

Hotshotting. So long as the kobold is in an ogre howdah, it can use one of the following options (roll a d6 or choose one); the kobold can use each one no more than once per day:

Escape Maneuvers. If the ogre howdah whose howdah the kobold is inside of dies, the kobold can use its reaction to move 15 feet without provoking attacks of opportunity instead of being placed in an unoccupied space within 5 feet of the ogre howdah.

Heated Body. A creature that touches the huggy or hits it with a melee attack while within 5 feet of it takes 5 (1d10) fire damage.

Water Susceptibility. For every 5 feet the huggy moves in 1 foot or more of water, it takes 2 (1d4) cold damage.

Touch. Melee Weapon Attack: +5 to hit, reach 5 ft., one creature. Hit: 6 (1d6 + 3) fire damage. If the target is a creature or a flammable object, it ignites. Until a creature takes an action to douse the fire, the target takes 5 (1d10) fire damage at the start of each of its turns.

Hug. Melee Weapon Attack: +5 to hit, reach 5 ft., one creature. Hit: 2 (1d4) necrotic damage and the huggy attaches to the target. While attached, the huggy doesn’t attack.  Instead, at the start of each of the huggy’s turns, the target takes 2 (1d4) necrotic damage and the target’s hit point maximum is reduced by an amount equal to the necrotic damage taken. The reduction lasts until the target finishes a long rest. The target dies if this effect reduces its hit point maximum to 0, disintegrating into a pile of ashes. In addition, if the target is a Large or smaller creature, it bursts into flames and changes into a fire elemental. The target remains this way as long as the huggy is attached. Elementals, undead, and constructs are not affected.

As a fire elemental, the target’s type changes to elemental. It gains damage resistance to bludgeoning, piercing, and slashing from nonmagical weapons, damage immunities to fire and poison, as well as condition immunities to exhaustion, paralyzed, petrified, poisoned, and unconscious. The target sheds bright light in a 20-foot radius and dim light in a 40-foot radius and the target has a heated body, which causes any creature that touches the target or hits it with a melee attack to take 1d10 fire damage. Also, the target is susceptible to water; for every 5 feet the target moves in 1 foot or more of water, it takes 1d4 cold damage. All of the target’s melee attacks deal an additional 1d6 fire damage.

The huggy can detach itself from the target by spending 5 feet of its movement, at which point the target reverts back to normal.

Parachute (1/day). Whenever the quickling falls from a height of 10 feet or more, its rate of descent slows to 60 feet per round, it takes no falling damage and can land on its feet.

Spread the good word of the blog and let everyone have fun with these zany monsters. Just click one of the share buttons below.

Be sure to check out Keith Ammann’s article on ogre tactics, too!

As usual, all of the monsters here are free for you to use in your personal Dungeons & Dragons Fifth Edition campaigns. Just not commercially!