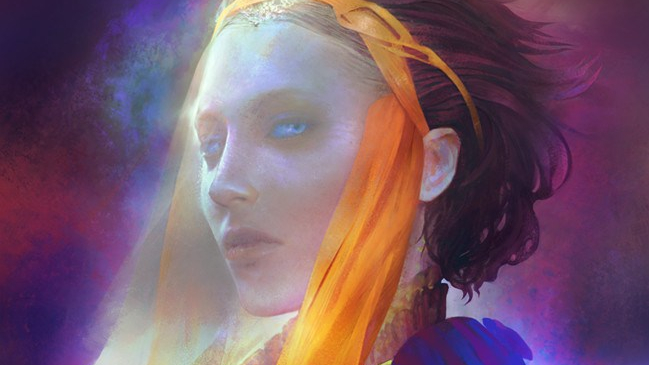 The following details are part of the Omerian Echo campaign setting that will be released at the end of the first quarter of 2019 on Patreon. For more details, check out the Omerian Echo entries here on the site.

Pretty quick notes on this one. Basically, Vindandas are genasi, except genasi aren’t part of the Fifth Edition SRD, hence the reskin and change. Resistance to falling damage shouldn’t be that huge of a deal (there are races that start with resistance to fire, after all, which probably comes up a lot more), and instead of the “hold your breath forever” power of genasi, vindandas aren’t required to breathe at all.

Ancient enemies of the örn, the vindandas are half-elemental beings tied to elemental air. Once Old Omeria shattered, consumed by the Banevoid, the harsh winds and vacuum of the solid world’s absence empowered these genie-kin.

Much like the cloud and storm giants, the vindandan High Cities stay aloft thanks to internal magic and not through the presence of Sparker Engines. Their cities are sights to behold, massive motes shimmering with azure crystals.

The vindandas are a proud and haughty race who see all the Ascended races—giants included—as trespassers in their realm. They are at the heart of the slave trade, as well, seeing it as humanity’s penance for the destruction of Old Omeria. In fact, the vindandas call it The Thousand Year Service, a suggestion that humans won’t know true freedom until they’ve served the other Ascended for a millennium to account for their ancestor’s mistakes.

Your vindanda character has the following traits.

Age. Vindanda mature at about the same rate as humans and reach adulthood in their late teens. They live somewhat longer than humans do, up to 150 years.

Alignment. Stubborn and self-reliant, vindanda tend towards a neutral alignment.

Size. Vindanda came in a wide variety thanks to their half-humanoid heritage, but are generally built like humans, standing anywhere from 5 feet to over 6 feet tall. Your size Medium.

Anaerobic. You do not breathe, therefore, you do not require air.

Light as a Feather. You have resistance to falling damage.

Languages. You can speak, read, and write Common and Vindandan. Vindandan is a soft language utilizing a lot of breathy words.

The vindandas are included in the Omerian Echo campaign setting that I’m developing for Patreon. I expect the material to be released sometime in late March (just before The Forsaken Peak Kickstarter commences).

Patrons of the Silver Club or higher get the material for FREE. Plus, all Patrons get every other PDF made for the site, including monthly collections (usually 40+ pages of content). They also get to vote in all Patron-only polls, swag, printed copies of the books, access to workshops, and top-priority requests. The best part? It only starts at $3!

Yep, sure is! So what the hell are you waiting for?

BONUS: this race will be included in the January 2019 collected works, titled EVIL, available on Patreon at ALL levels.