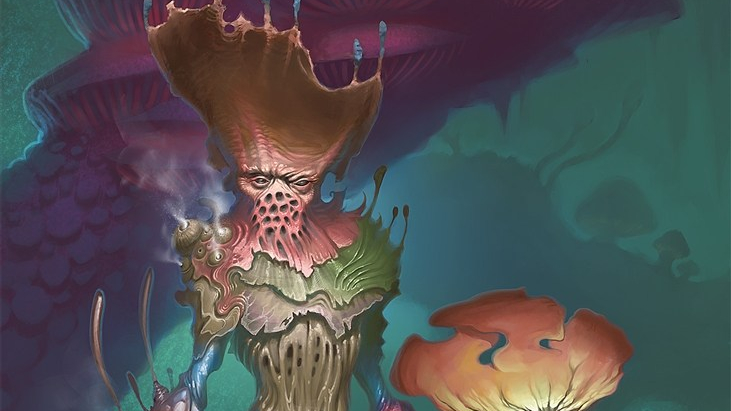 Every month, I turn to my Patrons over on www.patreon.com/dmdave for cool ideas. Last month it was monsters and they certainly delivered. Now, it’s aliens. Here are some of the cool aliens that they came up with to help populate the science fiction campaign setting of Blueshift. Some of the races work best as monsters while others work as playable races for players (see the section on Blueshift for new playable monsters). Enjoy!

If you’d like to see your requests made by DMDave, join up as a patron. It’s only $3 to become a member and there’s always a special theme each month (for September, it’s ice-themed weapons and spells).

Boletans hail from the swamps of the hyperevo world of Primordia. They look like tall, brightly colored mushrooms in the rough shape of a humanoid. Each mushroom is connected to the soil of the Primordia; as long as they can feel the soil beneath their root-feet, they can communicate with each other.

The boletans possess a highly regimented society led by a god-like being known as the Star-Fungus. The Star-Fungus expects unquestioned obedience from its mushroom-subordinates. In the minds of the tyrannical boletans, the Star-Fungus is the one true God; all others gods are false idols and the followers should be destroyed and turned into soil-food.

Hive Mind. As long as any part of the boletan touches soft soil, the boletan can telepathically communicate with any boletan within 300 feet of it that is also touching the same soil.

Spores. When the boletan takes damage from a melee weapon attack, it explodes with spores. Each creature within 10 feet of the boletan must succeed on a DC 12 Constitution saving throw or contract the boletan spores disease. The diseased target can’t regain hit points, and its hit point maximum decreases by 10 (3d6) for every 24 hours that elapse. If the curse reduces the target’s hit point maximum to 0, the target dies, and its body turns to a puddle of rotting flesh overgrown with mushrooms. The disease lasts until removed by the lesser restoration spell or other magic.

Slam. Melee Weapon Attack: +3 to hit, reach 10 ft., one target. Hit: 4 (1d6 + 1) bludgeoning damage plus 10 (3d6) necrotic damage. If the target is a creature, it must succeed on a DC 12 Constitution saving throw on contract the boletan spores disease as described above.

On the outside, the bronbbrog appears to be nothing more than an ordinary small, domesticated animal, meows, woofs and all. Of course, it’s anything but. Within the animal’s mouth is a portal to a pocket dimension/gullet of a forgotten horror known as the bronbbrog, a lesser servitor of the elder gods. Bronbbrogs are only ever seen from the inside out. Everything within their gullet exists in its own dimension which the flesh of the bronbbrog surrounds. Once inside a bronbbrog, cutting through it disrupts the fabric of the bronbbrog dimension, causing it to implode.

The bronbbrog subsists on creatures that fall into its interior pocket dimension using an extradimensional siphon trait. This attack essentially dissolves the creature into a state of nonexistence. Even memories of the creature fade to nothing.

Mad cultists created the original bronbbrog “host”, hoping it would help them connect with the elder gods. Big mistake.

Grasping Tendrils. The bronbbrog can have up to four tendrils at a time. Each tendril can be attacked (AC 16; 10 hit points; immunity to poison and psychic damage). Destroying a tendril deals no damage to the bronbbrog, which can extrude a replacement tendril on its next turn. A tendril can also be broken if a creature takes an action and succeeds on a DC 15 Strength check against it.

Host Dependent. If the bronbbrog lacks a host, it has total cover against attacks and other effects outside of it, and it can only make attacks against targets that are inside of it. Without a host, a creature cannot escape the inside of the bronbbrog except through magical means.

Multiattack. The bronbbrog makes two attacks with its tendrils and uses Reel.

Tendril. Melee Weapon Attack: +7 to hit, reach 40 ft., one creature outside of the bronbbrog’s host. Hit: The target is grappled (escape DC 15). Until the grapple ends, the target is restrained.

Reel. The bronbbrog pulls each creature grappled by it up to 40 feet straight toward its host.

Swallow. Melee Weapon Attack: +7 to hit, reach 5 ft., one creature the bronbbrog is grappling. Hit: The target is swallowed, and the grapple ends. When swallowed, the creature falls into a 20-foot radius, 40-foot high cylindrical pocket dimension composed of coarse, rubbery flesh. While swallowed, the target has total cover against attacks and other effects outside of the bronbbrog. At the start of each of its turns, the target must make a DC 16 Charisma saving throw or its Charisma score is reduced by 1d4. The target dissipates into nothing if this reduces its Charisma score to 0. In 1d4 days, all creatures that knew the creature lose any memories they had of the creature. Otherwise, this reduction lasts until a greater restoration or similar magic is cast upon the target.

The jackramit (or ramhare) is the result of a science experiment gone wrong. Combining the DNA of two Terran species, the rabbit and the ram, this large, bizarre, wall-eyed creature has the long ears of the former and the horns of the latter.

Jackramits fiercely defend their territory and their young. Reaching speeds in excess of 35 mph,  a strike from a Jackramit can easily break bones of creatures larger than they.

They make a sound akin to a cow’s moo.

Aggressive. As a bonus action, the jackramit can move up to its speed toward a hostile creature that it can see.

Charge. If the jackramit moves at least 30 feet straight toward a target and then hits it with a ram attack on the same turn, the target takes an extra 10 (3d6) bludgeoning damage. If the target is a creature, it must succeed on a DC 14 Strength saving throw or be knocked prone.

Peedlebees are friendly creatures that live on the hyperevo planet Primordia. They are short, covered in fur, and have long, fluffy tails, similar to a Terran squirrel or chinchilla.

Overall, peedlebees are nomadic creatures. They survive by living in the trees of Primordia, out of reach of the dangerous predators that roam the floors of the planet’s swamps and jungles. Occasionally, peedlebees coexist with grunk-grunks who protect and assist the peedlebees.

Many peedlebees are natural sorcerers (called Moopees in the peedlebee tongue), who draw their power from the radio waves that constantly assault Primordia. Moopees enjoy traveling with other interstellar beings, seeing it as their duty to use their arcane powers for good.

Keen Hearing. The peedlebee has advantage on Wisdom (Perception) checks that rely on hearing.

Safety in Numbers. While the peedlebee is within 5 feet of an ally, the peedlebee has advantage on saving throws against being charmed or frightened.

Radpistol. Ranged Weapon Attack: +4 to hit, range 50/150, one target. Hit: 12 (3d6 + 2) radiant damage. Instead of dealing damage, the peedlebee can attempt to stun the target. The target must make a DC 10 Constitution saving throw or become stunned for 1 minute. At the end of each of the target’s turns, the target can repeat its saving throw, ending the effect on itself with a success.

Thumbnail art from Wizards of the Coast.