Rivals for the Omerian Throne | New Benefit for DMDave Patrons 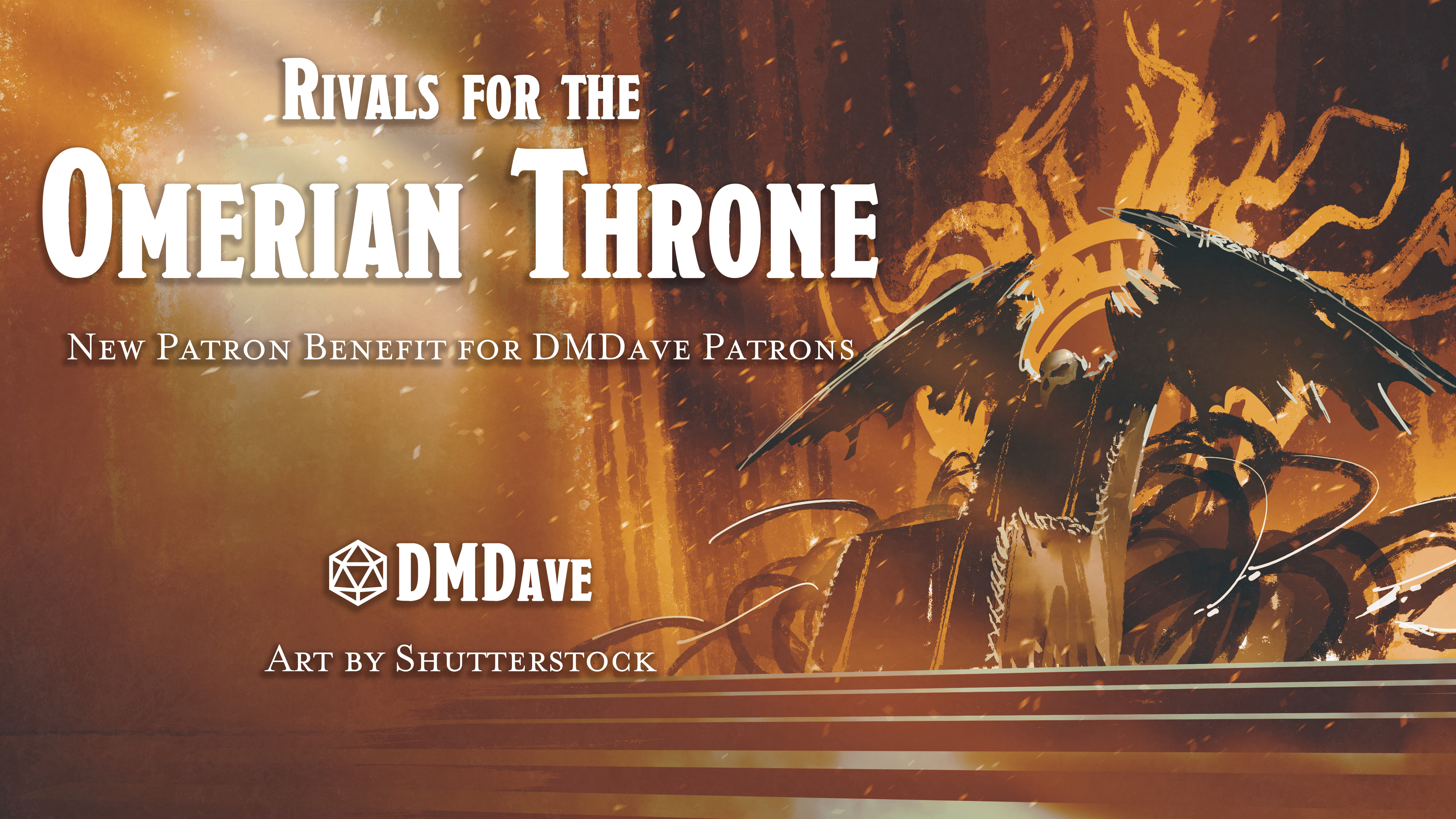 King Evadimus of Riva is dead and the Omerian Throne sits vacant. Childless, Evadimus had no clear heirs. Consequently, it is now a time of grim politics, war, and intrigue as powerful lords and ladies from across the Shining Continent vie for the spot as the land’s greatest monarch.  Who will become the next ruler of Omeria? That is the subject of the Rivals for the Omerian Throne game.

What is the Rivals for the Omerian Throne game?

Rivals for the Omerian Throne is a game within my Patreon account for patrons that have Legendary status (see below). Similar to the Gods of Wandrossa game from earlier this year, the rivals get to affect the actual landscape of the continent of Omeria.

Here’s the rough gist of how the game works:

What is Legendary Status?

Originally, this game was going to be reserved for Platinum members only. Then some of my Patrons hit me up with some good questions: What if you’ve been a member forever but non Platinum? Or what if you were platinum and had to downgrade because of some real-life troubles?

Hey, I’m an understanding dude! Things happen. That’s why I’m introducing the “Legendary Members” system. For people who’ve been loyal subscribers for a long time or are just involved and help out with stuff, you’ll get “Legendary” status.

The regulations are as follows:

You must be a currently subscribed Platinum member

You have contributed a minimum of $250 as a DMDave patron and/or Kickstarter backer and still be subscribed (any tier).

You are a 12-month subscriber from Kickstarter and you are subscribed to DMDave at any level.

You are a DMDave regular collaborator (this includes artists, writers, proofreaders, and more).

Having learned from my mistakes with Gods of Wandrossa in early 2019, there are a few ground rules for this game.

Will other patrons get to join in?

Starting off, it’ll just be for legendary status folks. However, it’s likely I’ll open things up a bit starting in January. Those of the “next tier” will get to play important NPCs through Omeria that may not have the reach that the rivals do, but are still important none-the-less. This pilot program may even come as soon as the midpoint of December. We’ll see!

How do I join in on the fun?

All you have to do is become a DMDave patron to get all the cool details! Hop over to DMDave’s Patron and start subscribing. In addition to this game, subscribers even at the $3 get almost daily PDFs, requests, polls, and more.