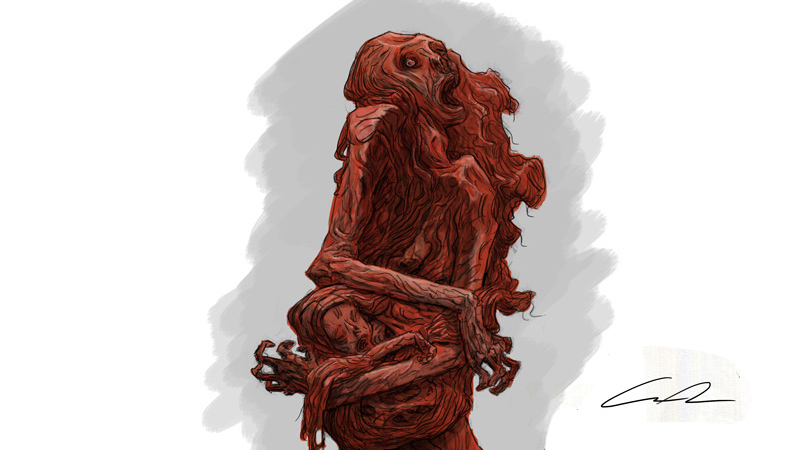 The young mother wiped away her own tears and stared to the dark west, as she held the playful infant close to her chest. The Graywood Forest rocked gently in the breeze, leaves thick with spring verdancy. Inches away from her bare feet was a sharp drop, nearly 150 feet down onto the rocky outcroppings hugging the side of the mountain top. It was the only way out of this small cave save for the small tunnel she had crawled through to get there.

From that tunnel came the sound of metal scraping against hard stone; someone was coming. The young mother spun on her heel, clutching the infant even tighter than before. She kept her back to the drop.

“Priss,” came a man’s voice as he stuck his head into the small cave. He stood and dusted himself off and surveyed his surroundings. His hand rested on the pommel of his sword. “Let’s be done with this, shall we? Come back to the camp with me. Not safe here.”

“Not safe with you either!” she warned, taking a small step backwards, ever closer to the edge. Immediately, the man threw his hands up in surrender, begging for tranquility.

“Think about the child in your arms, Priss,” warned the man. “That’s the blood of a Prince you have there. He will be someone very important some day. He will be strong like his father.”

Two more soldiers entered the cave taking positions behind the man. The expressions on their faces betrayed that they were a little less patient than he.

“You are honored, Priss. You are honored by the entire Peak and you will be cherished,” the man took a step closer. And she took another step backwards. For a moment, she nearly lost her balance. Gravel loosened by the sudden shift clip-clopped down the cliff face.

“No, I won’t. I know what happens to the women. I’ve heard the stories. And then the children disappear into the ranks of your terrible armies. Not to us,” she pushed back more tears and kissed the top of her child’s head. “Not to this one.”

The two other soldiers started to move forward, but the man kept them back with a glance.

“Listen, Priss,” said the man. “What if I could take care of you? Get you out of the castle. To the north?”

Between her sniffles she looked up at him. Puzzled.

“I know a merchant. In Coldwater. He can get you across the sea. You and the child could have a new life. That could be good, yes?”

She did not notice that he was inching closer.

“Let’s end this all tonight. My men and I are tired. The climb was very difficult. This armor is very heavy, you know,” he chuckled, clanking the chaosmen symbol emblazoned on his breastplate with his gauntlet. “Come now.”

He was within grabbing distance of her.

“No,” she started with a whisper that rose to a scream. “You won’t take us back. You won’t!”

No one could have survived a fall like that. Especially not a young mother and her infant child.

For some time, the man stood at the portal staring down at the broken remains of the woman and her babe far below. He said nothing.

Eventually, one of the soldiers shattered the silence with a whisper, “What do we tell him, my lord?”. With nothing more than a sharp glance, the man pushed past the other two. He then crawled back into the hole from whence he came. And the other two followed.

Incorporeal Movement. The leaping mother can move through other creatures and objects as if they were difficult terrain. She takes 1d10 force damage if she ends her turn inside an object.

Sunlight Sensitivity. While in sunlight, the leaping mother has disadvantage on attack rolls, as well as on Wisdom (Perception) checks that rely on sight.

Invisibility. The leaping mother magically turns invisible until she attacks, casts a spell, or uses her Telekinetic Thrust action. She can use and maintain her innate spellcasting ability while invisible.

Telekinetic Thrust. The leaping mother targets a creature or unattended object within 30 feet of her. A creature must be Medium or smaller to be affected by this magic, and an object can weigh up to 200 pounds.

If the target is an object that isn’t being worn or carried, the poltergeist hurls it up to 30 feet in any direction. The poltergeist can use the object as a ranged weapon, attacking one creature along the object’s path (+5 to hit) and dealing 5 (2d4) bludgeoning damage on a hit.

The leaping mother is a specialist specter/poltergeist variant for Part 2 of The Secret of Forsaken Peak adventure, The Eyries. Check out the sneak peek I posted a little earlier on the site.

Feel free to use her in your campaign, too, if you want a particularly eerie ghost story in one of your stories.

And don’t forget to join the mailing list for The Secret of Forsaken Peak to get the first part of the adventure for FREE as well as updates as more material comes out.