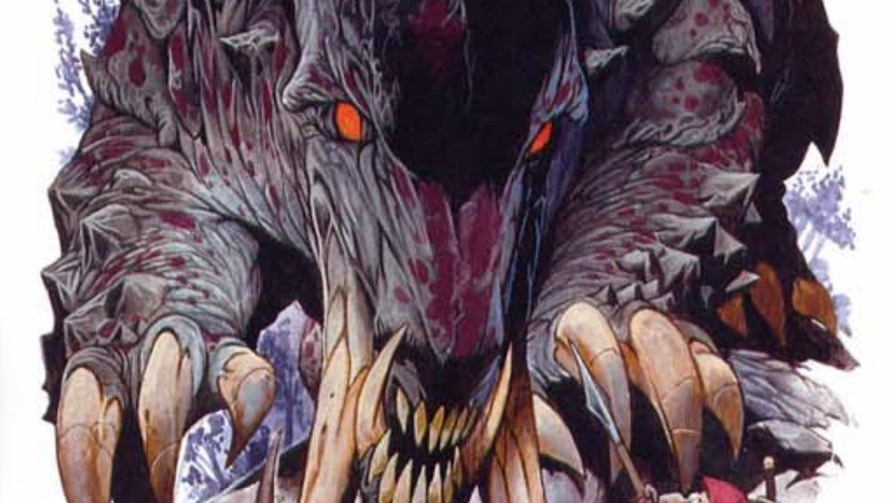 With a disposition as bad as its reputation, it’s no wonder that a nightmare beast spreads terror wherever it goes.

A nightmare beast stands at least 20 feet tall on its four legs. Each of its digits is tipped with a 3-foot-long claw. Its jaws are filled with 1-foot-long teeth and flanked by curved tusks the size of cavalry lances. A nightmare beast’s thick, rough hide is typically dark gray with dark blue, purple, or brown splotches in between patches of bony material. Its red eyes, each the size of a man’s head, glow in the dark.

The nightmare beast prefers to lair in a remote cave. It spends most of its time in search of food, and it ends to hunt in one area until the food supply is exhausted. At that point, it usually hibernates for up to one year, then awakens again in a ravenous state.

The monster has no interest in treasure, nor does it often bring any prey back to its lair, unless the kill is too large that it cannot be consumed all at once. A nightmare beast often inadvertently eats treasures along with their owners, so occasionally items of value turn up in the creature’s lair at a later time.

Innate Spellcasting (Psionics). The nightmare beast’s innate spellcasting ability is Wisdom (spell save DC 15, +7 to hit with spell attacks). It can innately cast the following spells requiring no components:

Keen Sight and Smell. The nightmare beast has advantage on Wisdom (Perception) checks that rely on sight and smell.

Magic Resistance. The nightmare beast has advantage on saving throws against spells and magical effects.

Trampling Charge. If the nightmare beast moves at least 20 feet straight toward a creature and then hits it with a gore attack on the same turn, that target must succeed on a DC 21 Strength saving throw or be knocked prone. If the target is prone, the nightmare beast can make one claw attack against it as a bonus action.

Gore. Melee Weapon Attack: +13 to hit, reach 10 ft., one target. Hit: 21 (4d6 + 7) piercing damage. If the target is a creature, it must succeed on a DC 21 Constitution saving throw or take 5 (2d4) slashing damage at the start of each of its turns due to a fiendish wound. Each time the nightmare beast hits the wounded target with this attack, the damage dealt by the wound increases by 5 (2d4). Any creature can take an action to stanch the wound with a successful DC 13 Wisdom (Medicine) check. The wound also closes if the target receives magical healing.

The monster description above uses the following new spells.

Casting Time: 1 reaction, which you take when you hit a creature with a melee attack

Choose a creature within range. For the duration, each time you deal damage to that creature with a melee attack, including the triggering attack, it must make a Wisdom saving throw. On a failed saving throw, the creature takes psychic damage equal to the amount of damage caused by the attack. If the damage from this spell would reduce the creature’s hit points to 0, the target is stable but stunned for 1 minute, even after regaining hit points. At the end of each of the creature’s turns, it can make another saving throw, ending the stunned effect on itself with a success.

Choose a creature within range. The target must make an Intelligence saving throw.
On a failed save, the creature takes 3d8 psychic damage, and it is filled with self-doubt, leaving it able to use its action on its next turn only to take the Dodge, Disengage, or Hide action. On a successful saving throw, it takes half as much damage.

Choose one creature that you can see within range. The target must make an Intelligence saving throw. On a failed save, the creature takes 5d8 psychic damage, and it goes into a fury, as its id runs rampant. On its next turn, it can use its action only to take the Dodge or Attack action. On a successful save, it takes half as much damage.

Casting Time: 1 reaction, which you take when you are targeted by a spell or effect that requires you to make an Intelligence, Wisdom, or Charisma saving throw or deals psychic damage

Until the start of your next turn, you have a +5 bonus to Intelligence, Wisdom, and Charisma saving throws, and you gain resistance to psychic damage.

Target one creature you can see within range. The target must succeed on an Intelligence saving throw or take 1d10 psychic damage.

At Higher Levels. When you use a spell slot of 2nd level or higher to cast this spell, the damage increases by 1d8 for each spell slot above 1st.

Choose a creature within range. The target must make an Intelligence saving throw, taking 3d6 psychic damage on a failed saving throw or half as much damage on a successful one.

At Higher Levels. When you use a spell slot of 2nd level or higher to cast this spell, the damage increases by 1d6 for each spell slot above 1st.