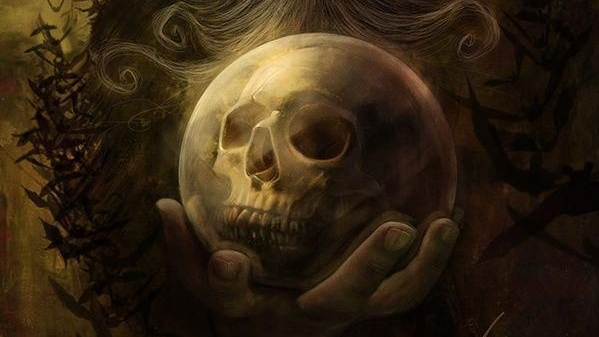 Anyways, I kicked things off with wrath. I knew that I wanted it to be a weapon, and honestly, I couldn’t think of anything more wrathful than a hammer. I soon followed that up with the Mask of Lust, a powerful artifact that could drive anyone around you insane with desire.

Got a request? Become a patron today! Tiers starting at $3.

Logren D’aenere was a powerful noble and musician who lived in a mighty kingdom. Beloved by many, Logren kept a lively public appearance. Children danced to his songs, women laughed at his jests, and men enjoyed his company.

Of course, not all loved Logren. Marthiele, Logren’s father, Lord of the House D’aenere, was envious of his own son’s popularity. He saw Logren as a threat, a force supplanting him from the love he once received from his own people. Of course, none of that was true. Marthiele was just as beloved. Nonetheless, his jealousy grew, his dark obsession consuming his thoughts.

On Logren’s thirtieth birthday, Marthiele took his son on a hunting trip. There, in the forest, Marthiele murdered Logren. He cut Logren’s face to pieces and pushed him into the lake. Returning without his son, Marthiele told the people of the kingdom his son had been attacked by a wyvern and carried away. The kingdom mourned Logren. But much to Marthiele’s surprise, they turned their attention to the poor, grieving father. Marthiele was once again the most beloved soul in the land.

Ten years passed and Marthiele’s envious nature did not fade. It only grew worse. More murders followed. He slew men who were stronger or wittier than him. He killed women who denied their affections. Even children could not escape Marthiele’s horrible envy.

Eventually, the other nobles became aware of Marthiele’s dark nature. Guards stormed the D’aenere estate and seized the wicked noble. Marthiele never made it to the castle dungeons as he was mobbed in the streets. He was pulled into the streets where those he had hurt through his crimes spat at him, kicked him, cursed his name. The people tore away his clothing and clawed at his face and eyes. He was stabbed, bludgeoned, and stoned.

Bloodied, Marthiele laid in the center of the mob. He did not weep. Nor did he beg for his life. Instead, he laughed. This was the most attention he had ever received. There, at that very moment, as death swiftly approached, the people of the city cared only for Marthiele. “Thank you,” he whispered, just before a knight removed Marthiele’s head with a sword.

Marthiele’s head sat on a pike for fifteen days. The buzzards and insects devoured the flesh of his face, leaving nothing more than a grinning skull.

Random Properties. The skull of envy has the following random properties:

Bonus Proficiency. If you are attuned to the skull and are carrying it with you, you have proficiency with Wisdom (Insight) and your proficiency bonus is doubled for the skill.

Superiority Detection. If you are attuned to the skull, you can ask the skull if any humanoid within 5 miles is your superior in regard to one ability score of your choice.

The skull tells you the name of the closest humanoid in range (if any). You sense the direction to the target’s location as long as that creature remains within 5 miles of you. If the target is moving, you know the direction of its movement. If the humanoid the skull described or named is in a different form, such as being under the effects of a polymorph spell, the skull doesn’t locate the target.

Steal Ability. If you are attuned to the skull and you are within 60 feet of a superior you detected using this artifact’s Superiority Detection feature, you can use the skull’s dark powers to siphon the capabilities of the target. Make a ranged spell attack against a creature within your reach (+10 to hit) and choose one ability score with which the creature is your superior. On a hit, the target’s ability score is reduced by 1d4, and you gain a temporary increase to the same ability score equal to the creature’s normal, unreduced ability score or the amount of the reduction, whichever is less. For example, if your own Strength score is 17 and you target a creature with a Strength score of 18 and reduce its Strength by 2, your Strength increases to 18.  The target’s reduction lasts until removed with a greater restoration or heal spell. And your ability score increase lasts for 24 hours.

Cursed. The skull bears a curse that affects you when you don’t use it. For each 24 hour period that passes without using the skull’s Superiority Detection feature, you must make a DC 18 Wisdom saving throw. On a failed saving throw, you take 3d8 psychic damage. In addition, your hit point maximum reduces by an amount equal to the damage taken and you can’t regain hit points until you use the skull again. If the skull reduces your hit point maximum to 0, you die and your soul is absorbed into the skull. Only a wish spell can remove your soul from the skull.

Big shout out to my Patron, Jesse, who came up with this idea.

If you’d like one of your requests made, be sure to check out my Patreon page.

3 thoughts on “The Skull of Envy | Seven Deadly Sins Artifacts”