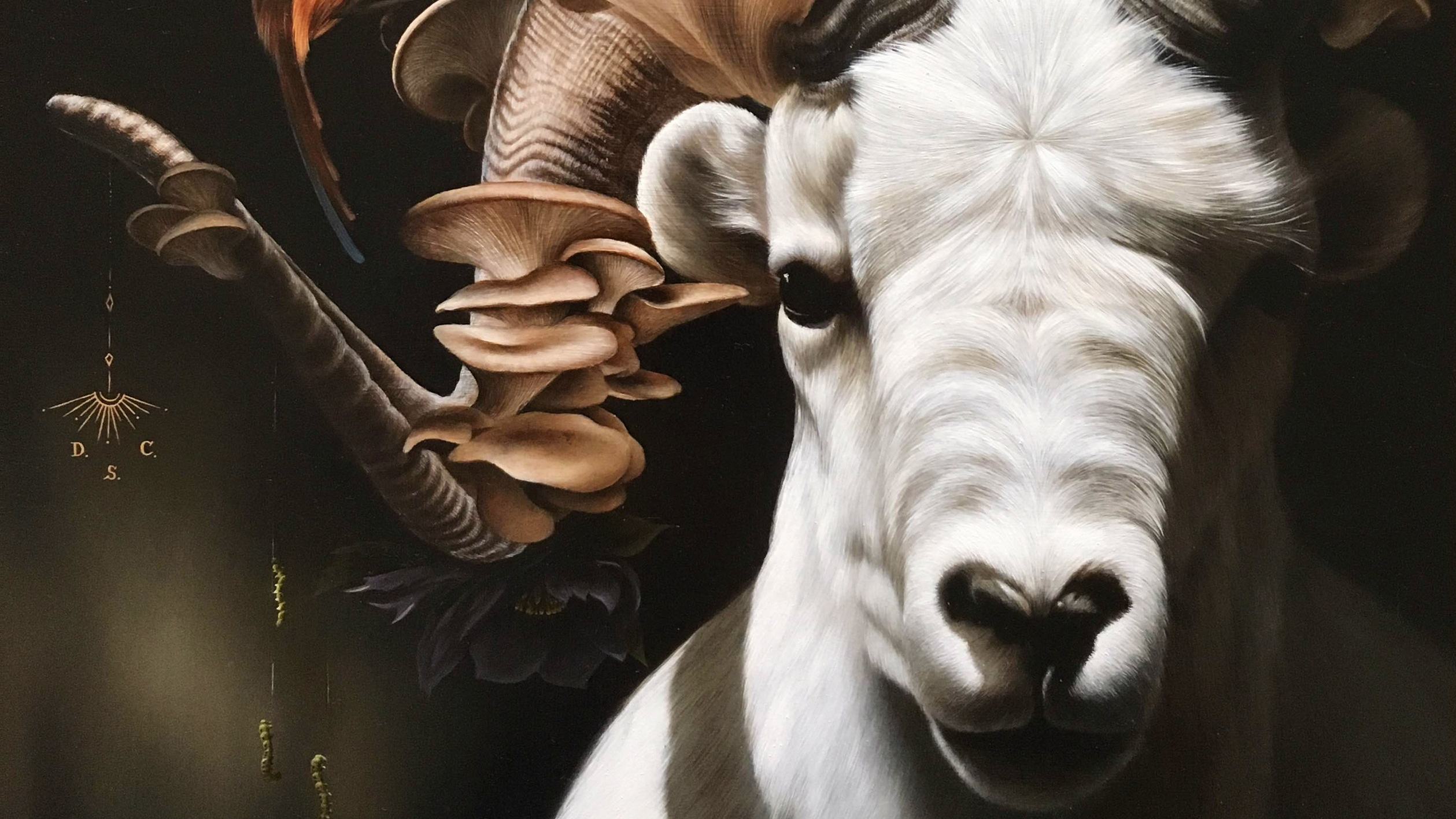 The Goat. What the hell have I gotten myself into? Either way, this is going to be zany as hell.

Warlocks are… well, weird. They’re like a weirdo cross between a sorcerer, rogue, and superhero? I guess. Don’t get me wrong, I like them, but man are they tricky. They’re also one of the most controversial classes in Fifth Edition; you either love them or you hate them.

To be honest, even as I’m typing this, I have zero idea what kinda crazy build I’m going to make revolving around a goat. However, I think I can get a few hints by turning to page 330 of the Monster Manual: Goat.

Here’s what we can learn about goats (at least as far as the WotC designers are concerned):

Pretty cut and dry, right? The giant version is slightly better across the board, especially in the Strength department where it gets a +5 upgrade from its Medium-sized cousins. Plus, they’re marginally wiser, too.

Warlocks get features tired to their patron at 1st, 6th, 10th, and 14th. Here’s a rundown of each of the warlock subs found in the PHB and Xan’s:

Wowzas. And I thought sorcerers were brokedy broke-broke at 14th level or higher. Regardless, this gives me ton of room to play with some cool features for our goatlock.

Here are a few ideas I’m stewing on:

Okay, so the goatlock is shaping up to be a tank-lock in my mind that can deal some serious damage. Therefore, all of its features and bonus spells need to lean on that aspect.

Okay, I’ve made some weird builds before, but this one takes the cake. And to be frank, it’s probably one of my favorites already.

All of the bonus spells are buffs. This warlock is meant to be tanky, therefore it gets the requisite buffs pulled from wizard and paladin spells. I thought stinking cloud was funny because I see envision it as a fart. But that’s because I have the sense of humor of a 7-year-old.

At 1st, the goat gets a headbutt attack (same dice as monk progression attacks) and it has a pool of d6s it can use to buff up its attacks. With it being drawn from a pool and being capped at 5 dice max (or 6 if you find some magical thingie that can boost your Charisma), it should be fairly balanced. And oh yeah, since bladelocks get to add Charisma to their weapon attacks, I thought it was only fair that the goatlock got to add it to its headbutt.

6th level’s feature cracks me up. Basically, you eat garbage to gain temporary hit points. The gain is a little better than Celestials, but goatlocks don’t get to boost their allies. They get a bigger hike at 17th level, effectively doubling the available temporary hit points. In addition, their headbutt attacks become magical at 6th.

10th plays upon the goat’s stubbornness allowing it proficiency in Intelligence saving throws and immunity to charm. Intelligence isn’t really that widely used in saves, so I should be safe there, and the charm repercussion power is in line, if not slightly weaker, than others who can do the same such as archfey and GOOlocks.

Finally, 14th has to be the best capstone I’ve ever created. Basically, you turn into the Juggernaut from X-Men. Once you get going, nothing can stop you other than a steel wall, a stronger creature, or pure exhaustion. The only nerf is that you can’t move after the fact. Beyond that, you’re a charging machine. Now, some will whine that it busts open dungeons pretty bad, but by 14th levels, it’s totally okay to have “magical” walls in your dungeons. Just don’t complain if you plan on railroading them into a stone-walled prison and the thing busts out. That’s on you.

At 1st level, a warlock gains the Otherworldly Patron feature. The following option is available to a warlock in addition to those normally offered.

Your patron is a goat. A magical goat? Possibly. An alien goat? Could be. The greatest of all time? Conceivably. Whatever its origins, that higher power you’ve created a pact with is a garbage-eating, sure-footed, frog-eyed, head-butting, stubborn-ass goat.

As a warlock of the goat, you are imbued with the might of the goat as well as its lack of decorum and finesse. You do not fear rushing head first (literally) at enemies. Magic sword? No thanks. But it looks like it’d taste good on a sandwich. Stuck door? Stand back and hold my potions, lads.

The goat lets you choose from an expanded list of spells when you learn a warlock spell. The following spells are added to the warlock spell list for you.

When you select this otherworldly patron at 1st level, your dense skull is a natural weapon, which you can use to make unarmed strikes. If you hit with it, you deal bludgeoning damage equal to 1d4 + your Strength or Charisma modifier (your choice). At 5th level, the damage die increases to 1d6, and then again at 11th level to 1d8, and 17th level to 1d10.

Headbutt of the Goat

At 1st level, you gain the ability to channel the power of the goat to deal extra damage with your headbutt attacks. You have a pool of d6s that you spend to fuel this damage. The number of dice in the pool equals 1 + your warlock level.

Once per turn, you can use one or more dice from the pool to deal extra damage to one creature you hit with your headbutt attack. The maximum number of dice you can spend at once equals your Charisma modifier (minimum of one die). Roll the dice you spend and add it to your headbutt’s normal damage roll.

Your pool regains all expended dice when you finish a long rest.

Starting at 6th level, your headbutt attack counts as magical for the purpose of overcoming resistance and immunity to nonmagical attacks and damage.

At 6th level, you can eat mundane objects in order to gain temporary hit points. Choose one or more Tiny nonmagical objects with an AC of 15 or lower (see page 246 of the DMG for object ACs). You spend 2 minutes per pound of weight the object has eating it. For each pound of objects consumed in this manner, you gain 1d6 temporary hit points. The total amount of weight in objects that you can eat equals one pound per your Charisma modifier (minimum of one). At 17th level, the amount you can eat increases to one pound per twice your Charisma modifier (minimum of one).

At 10th level, your stubbornness is difficult to overcome. You gain proficiency in Intelligence saving throws. In addition, you are immune to being charmed, and when another creature attempts to charm you, you can use your reaction to force the creature to succeed on a Wisdom saving throw against your spell save DC, taking 2d8 psychic damage on a failed save or half as much damage on a successful one.

Greatest of All Time

Starting at 14th level, once you start charging, nothing can stand in your way. As long as you have not yet moved on your turn, you can use your action to choose a direction. You then charge 60 feet straight in that direction with your head down.

While charging, your movement is unaffected by difficult terrain, and spells and other magical effects can neither reduce your speed nor cause you to be paralyzed or restrained. You may also run across any liquid surface–such as water, acid, mud, snow, quicksand, or lava–as if it were harmless solid ground (you still take damage from the heat of crossing molten lava). If you are on a liquid surface when your charge ends, you become submerged.

Your charge ends if you move the full 60 feet, a creature succeeds on its saving throw, or you hit an object that you can’t break through. After your charge, your movement speed becomes 0 until the start of your next turn.

Next up: Chronomancy Arcane Tradition