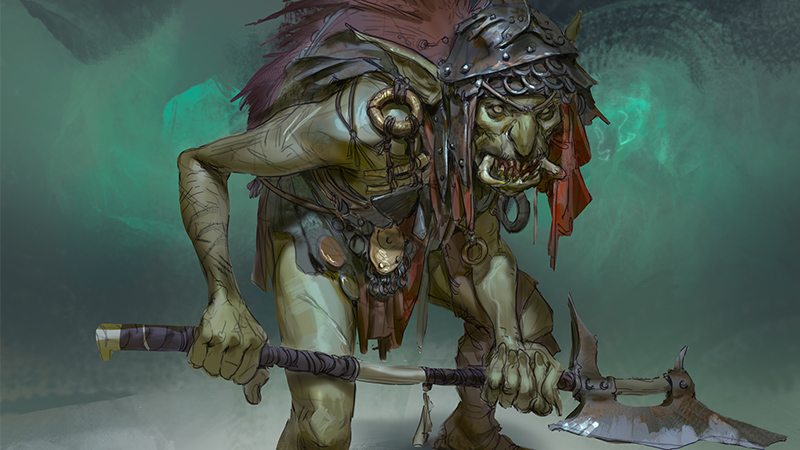 Goblins aren’t well-loved in the world. So it’s no surprise that many take to garbage heaps to hide and build a new way-of-life for themselves. Over the years, these “trash goblins” (they hate that term, by the way) have developed a culture that revolves around refuse. It’s in the waste of other humanoids they find food, tools, art, and their homes.

Oddly, trash goblins adopted a sense of humility within this filthy lifestyle choice. Perhaps it’s living among the unwanted things of others that helped them see something more in themselves. Of course, that’s not to say they still aren’t the violent little shits that all adventurers know and love. It’s just that they’re much more stoic about their violent-little-shittiness than their non-trash-dwelling cousins.

Trash goblins wear armor and wield weapons cobbled out of junk, most of which is covered in offal and disease. And they stink nearly as bad any ghast, sending those with uninitiated noses into violent wretching fits. Perfectly evolved for their environment, these goblins’ skins have become naturally mottled, making it easier for them to hide among their trash heaps.

Stench. Any creature that starts its turn within 5 feet of the trash goblin must succeed on a DC 10 Constitution saving throw or be poisoned until the start of its next turn. On a successful saving throw, the creature is immune to the goblin’s Stench for 24 hours.

Garbage Camouflage. The goblin has advantage on Dexterity (Stealth) checks made to hide among garbage.

Scimitar. Melee Weapon Attack: +4 to hit, reach 5 ft., one target. Hit: 5 (1d6 + 2) slashing damage. If the target is a creature, it must succeed on a DC 11 Constitution save or become infected with sewer plague as detailed in the Dungeon Master’s Guide (page 257).

Shortbow. Ranged Weapon Attack: +4 to hit, range 80/320 ft., one target. Hit: 5 (1d6 + 2) piercing damage. If the target is a creature, it must succeed on a DC 11 Constitution saving throw or become infected with sewer plague as detailed in the Dungeon Master’s Guide (page 257).