Tuuk the Thief of the Book | The Secret of Forsaken Peak 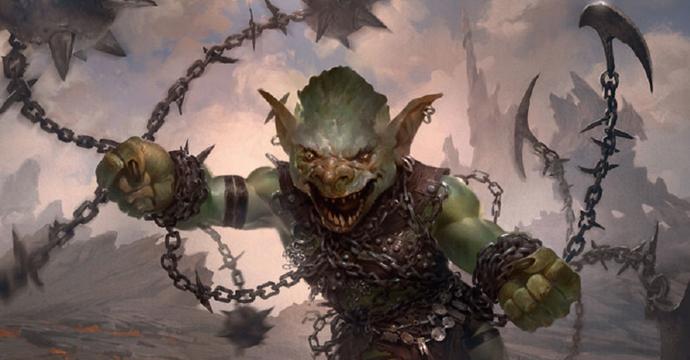 Yesterday, I held a contest on Instagram to name a goblin that’s going to be one of the bosses of the first chunk of The Secret of Forsaken Peak adventure. Things got a little out of hand.

I got a whopping 414 replies (and they keep coming)!

But out of those 414 replies, I decided that I liked @not_the_average_joe_99 ‘s suggestion the best, which oddly came in just a few minutes ago:

Tuuk the thief of the book. Goblin wizard who stole a spell book and studied it for his power

And before you ask, yes. I literally read every single one of the answers before picking! Haha!

Tuuk, like many of the goblins of the Goblin Mine that hides near the top of The Forsaken Peak, is a rotten, grumpy bastard. As captain of the mine’s guard, Tuuk rules his crummy coterie with nothing more than a sneer and a barbed chain.

However, Tuuk’s not completely evil. For starters, he’s a vegetarian; meat (and especially Lamarr’s cooking) never really sat right in his stomach. And second, he has an interest in magic. Seeing as most goblins shy away from the arcane arts, it’s something he’s kept a secret.

After a recent raid on a group of delegates from the Lantern Kingdom, Tuuk kidnapped an apprentice mage named Laren riding with the group. He covertly whisked Laren away to his office, where he keeps her hidden and fed. In exchange for keeping her alive, she’s worked with Tuuk to teach him magic, hoping she can find a way to someday escape. While she hasn’t exactly “fallen in love” with her captor, she has developed a bond with the brutish gobbo.

Of course, should any of the other goblins discover Laren (especially Rolfin), both Laren and Tuuk are done for.

Nimble Escape. Tuuk can take the Disengage or Hide action as a bonus action on each of his turns.

Spellcasting. Tuuk is a 1st-level spellcaster. His spellcasting ability is Intelligence (save DC 10, +3 to hit with spell attacks). Tuuk has the following wizard spells prepared:

Spiked Chain. Melee Weapon Attack: +4 to hit, reach 10 ft., one creature. Hit: 5 (1d6 + 2) slashing damage. Instead of damage, Tuuk can force the target to make a DC 11 Strength check. On a failed saving throw, the target falls prone in its space.

I do love me some goblins. And Tuuk should be a fun addition to the Goblin Mine adventure I’m working on. Keep your eyes peeled for more updates.

And if you haven’t already, be sure to sign up to get regular updates using the optin form in the right sidebar or down in the footer.