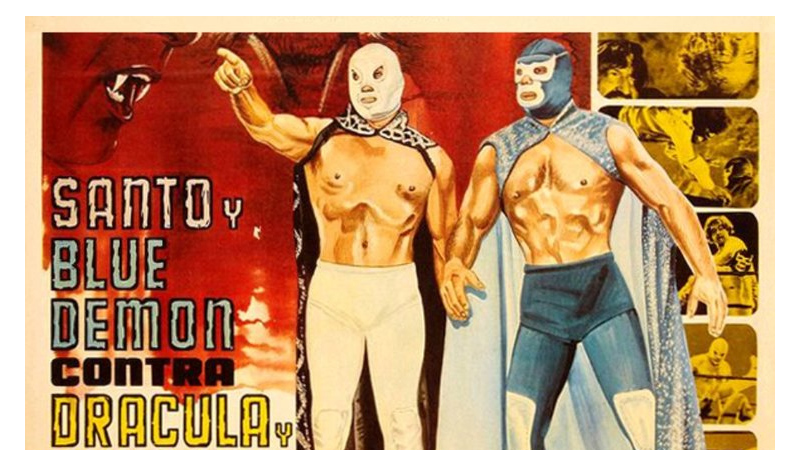 I don’t know what it is about the old pulp luchador stories and art, but I just love the stuff. The idea of a Mexican wrestler going toe-to-toe with Dracula and the Wolfman is so damn thrilling!

To complement the brand new setting that I’m working on as a joint effort between this blog and the new Patreon page, I thought I’d put together a list of the 10 best classic monsters for Dungeon Masters to throw at luchador characters (if you haven’t already seen it, there’s a luchador playable class here on the site).

Most old-school lucha art shows them fighting classic horror movie monsters. So, in a way, this list also doubles as a great Halloween list.

Perhaps the king of all monsters, Dracula is evil personified. And fortunately, the Monster Manual does a pretty excellent job of capturing Dracula’s stats under the vampire stat block (Monster Manual, p297).

The only difference you might want to make to buff up ol’ fanghead is to change his Sunlight Hypersensitivity vampire weakness to Sunlight Sensitivity.

Sunlight Sensitivity. While in sunlight, Dracula has disadvantage on attack rolls, as well as on Wisdom (Perception) checks that rely on sight.

Dracula is more than just a fight for a luchador, but a mystery to be solved. Why have some of the señoras from the local village gone missing? And just a few nights ago, a pair of mujeres with pale skin, baring fangs appeared at the old cementerio. ¿Que esta pasando?

For some tips on how to run a vampire encounter, be sure to read up Keith Ammann’s cool article on vampire tactics.

Of course, if you’re throwing Dracula into the mix, then you’ll need his on-again/off-again tag team partner, the Wolfman to make an appearance, too. Like Drac, the Wolfman (aka werewolf) has a stat block in the Monster Manual (page 211). Only trouble is, the fifth edition werewolf is a CR 3 creature while Drac is CR 13. If you want an epic werewolf encounter, he’ll need to buff up a little.

So, here’s a Greater Werewolf for Dungeons & Dragons Fifth Edition.

Shapechanger. The werewolf can use its action to polymorph into a Large wolf-humanoid hybrid or into a dire wolf, or back into its true form, which is humanoid. Its statistics, other than its size and AC, are the same in each form. Any equipment it is wearing or carrying isn’t transformed. It reverts to its true form if it dies.

Pack Leader. The greater werewolf has advantage on an attack roll against a creature if at least one of the werewolf’s allies is within 5 feet of the creature and the ally isn’t incapacitated. In addition, all other werewolves within 30 feet of the greater werewolf that are its allies also have the same advantage to their respective attack rolls as long as one of their allies is within 5 feet of it and the ally isn’t incapacitated.

Keen Hearing and Smell. The werewolf has advantage on Wisdom (Perception) checks that rely on hearing or smell.

Multiattack (Humanoid or Hybrid Form Only). The werewolf makes three attacks, one with its bite and two with its claws or greataxe.

When you’ve got ancient Incan, Mayan, and Aztec ruins all over your backyard, chances are you’re going to get some mummies, too. And sure, mummies mostly fit into Egyptian and Northern African settings, but that didn’t stop Santo and the Blue Devil from constantly fighting them in the old pulp lucha settings.

Both the stock mummy and mummy lord from the Monster Manual (page 229) make for great challenges against luchadors and hardly need any edits. The mummy lord itself is a perfect BBEG when Dracula and the Greater Wolfman are too busy haunting other folks around your fantasy Latin American setting.

Here’s another classic that we can (more or less) find in the Monster Manual, Frankenstein’s Monster. Frank is a flesh golem (page 169). And with its immunities to lightning, reasonable Intelligence, and aversion to fire, the flesh golem is about as good as it gets. If we want him to hang with Drac, the Wolf-man, and the Mummy Lord, you might want to max out his hit points (132 hp). Still, Frankenstein is a brute. Beefing him up any more than that takes away from the core character concept.

Of course, if Frank’s around, his creator shouldn’t be too far behind.

Dr. Frankenstein is the quintessential villain, the guy that wants to do good but ends up doing a lot of evil in order to do that good. Beyond his excessive intelligence, there’s nothing extraordinary about Frankenstein. Being that he’s from a Victorian era, though, he arms himself with a pistol and rapier–just in case.

Of course, you can’t have a good horror story without some zombies in it. Zombies more or less come in two flavors: Voodoo zombies, which are probably more appropriate for 1920s’esque pulp adventures; and the modern take on the zombie, aka the “Romero zombie.”

But if we want to make the perfect Romero-style zombie, we need to change its attacks. I recommend removing the base zombie’s slam attack and replacing it with the following pair of attacks:

Bite. Melee Weapon Attack: +3 to hit, reach 5 ft., one creature the zombie is grappling. Hit: 3 (1d4 + 1) piercing damage and the target must make a DC 12 Constitution saving throw or contract zombie disease. The diseased creature can’t regain hit points, and its hit point maximum decreases by 7 (2d6) for every 24 hours that elapse. If the disease reduces the target’s hit point maximum to 0, the target dies, and it returns as a zombie in 1 hour. The disease lasts until removed by a lesser restoration spell or other magic.

Everything else in its stat block should give it the same feel as a Walking Dead or Romero-style zombie.

#7 – The Creature from the Black Lagoon

Interestingly, there’s not a whole lot of parallels to the Creature from the Black Lagoon (also known as the “gill-man”) and other D&D monsters. Okay, sure, there’s a few that come close. Sahuagin come to mind, but they’re a little too old school D&D (plus, they can talk to sharks, which is weird).

So, if the luchadors want to fight El Monstruo de Laguna Negra, we’ll need to cook up something new. It doesn’t have to be tough, per se, so it could potentially make a good first level challenge for a new group of luchas.

Limited Amphibiousness. The gill-man can breathe air and water, but he needs to be submerged at least once every 4 hours to avoid suffocating.

Another classic Universal monster, the Invisible Man toes the line between good and evil. Some depictions have him as a guy who just wants his normal life back. Other depictions, such as the comic book League of Extraordinary Gentleman and the Hollowman, make him out to be a real piece of shit.

However you plan to run him, the easiest way to create an invisible man is to select one of the NPC classes from Appendix B in the Monster Manual and add the following feature:

Invisibility. The invisible man is invisible. This feature does not affect clothing, armor, or equipment, or anything he is carrying.

This shouldn’t affect his Challenge Rating too much, but to be on the safe side you might calculate his CR 1-2 higher than normal (as if he had a +4 bonus to both his AC and attack bonus).

Remember, invisibility gives a creature advantages on their attacks against creatures that can’t see them and in turn, creatures attacking the invisible creature have disadvantage.

Hyde’s stats are the same as Dr. Frankenstein’s except that his alignment is lawful good, he does not have the Deception skill, and he has the (shapechanger) tag as well as the Shapechanger feature:

Shapechanger. As an action, Jekyll can polymorph into Mr Hyde whose statistics are different than his own. Any equipment Jekyll is wearing or carrying isn’t transformed, and he reverts to his true form if he dies.

Shapechanger. As an action, Hyde can polymorph into Jekyll whose statistics are different than his own. Any equipment Hyde is wearing or carrying isn’t transformed. If Hyde dies, he reverts back to Jekyll.

War of the Worlds was one of the scariest movies (and TV shows!) that I saw growing up. And, of course, fighting Martians is a huge part of pulp cinema, especially if you let it bleed over into the 1950s’ Atomic Age.

If Martians landed in pulpy Mexico, surely the luchadores would come to the rescue to battle Los Marcianos!

Here are the stats for not only the Martians but their horrific, city-destroying fighting-machines as well.

Disintegration Ray. Ranged Weapon Attack: +5 to hit, range 120/360 ft., one target. Hit: 36 (8d8) force damage. If this damage reduces the creature to 0 hit points, its body becomes a pile of fine gray dust. If the target is a Large or smaller nonmagical object or creation of magical force, it is disintegrated without a saving throw. If the target is a Huge or larger object or creation of magical force, this ray disintegrates a 10-foot cube of it.

Senses darkvision 120 ft., passive Perception 10 (or the same as its pilot, whichever is higher)

Languages understands the languages of its pilot

Multiattack. The martian fighting-machine makes three attacks with its tentacles.

Tentacles. Melee Weapon Attack: +16 to hit, reach 30 ft., one target. Hit: 21 (4d6 + 7) bludgeoning damage, and the target is grappled (escape DC 17). Until this grapple ends, the target is restrained. The Martian fighting-machine has three tentacles, each of which can grapple one target.

Disintegration Ray. The martian fighting-machine fires a disintegration ray in a 120-foot line that is 10 feet wide. Each creature in that line must succeed on a DC 22 Dexterity saving throw or take 72 (16d8) force damage. If this damage reduces the creature to 0 hit points, its body becomes a pile of fine gray dust. If the target is a Huge or smaller nonmagical object or creation of magical force, it is disintegrated without a saving throw. If the target is a Gargantuan or larger object or creation of magical force, this ray disintegrates a 15-foot cube of it.

Terraform (Recharge 5-6). The martian fighting-machine blends all of the prisoners within its internal prison into a gruesome soup it uses to terraform non-Martian environments. Each creature within the martian fighting-machine’s internal prison must make a DC 17 Dexterity saving throw or take 72 (16d8) slashing damage. If this damage reduces the creature to 0 hit points, its body is shredded and spread around the ground as a terraforming agent.

If you’re a fan of the site and there’s anything that you’d like to see, be sure to let me know in the community section or drop me a message.

Be sure to check out the Patreon page. For just $3 per month, you get daily, exclusive content not available here on the site. In addition, once per month all of the content from Patreon and the blog will get turned into a book which all patrons get for free!

Hopefully, you enjoyed these classic monsters getting the Fifth Edition treatment.

If you like what you’re reading here, but sure to follow along by signing up to the updates list on the sidebar to the right or down in the footer.