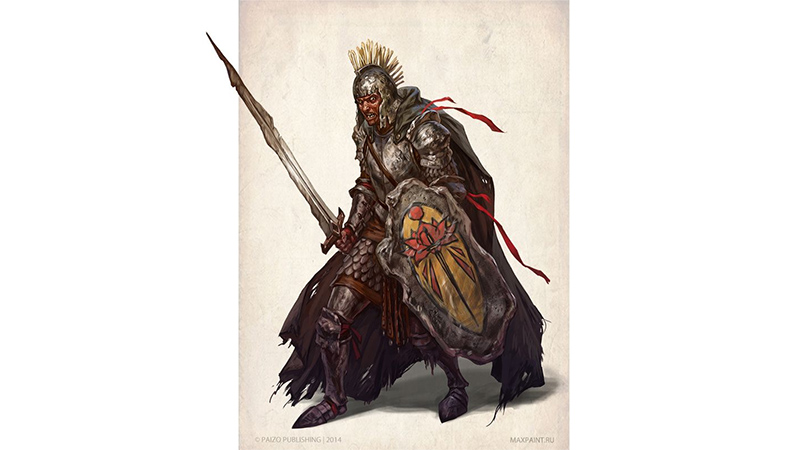 From the Kingdom of Chaos, they ride, the Chaosmen. Brown teeth gnashing and grimy claws gripping jagged, blood-stained swords, they howl like sick wolves.

The philosophy of Chaos is simple: the universe does not adhere to order, so why should its many creations? Man is animal. He should continue to be animal. If he is hungry, he eats. If he thirsts for blood, he conquers. Whatever his base desires may be, he should seize. No rules should bind him. No structure should guide him.

The Chaosmen are not evil, per se. Although, it is easy to interpret their methods as evil. But to the Chaosmen, evil looks like the rigid fetters of civilization and society. Order is evil. Law is evil.

Like a plague, they swarm. And their numbers are always greater than those they oppose. Were it not for their barbaric mindset and poor organizational skills, most of the pure, lawful lands would have already fallen under their shadow and drowned in the spilled blood of innocents.

Chaosmen look like soldiers. Although, “soldier” is probably the wrong term as they don’t follow instructions well. Nor do they have any real grasp of tactics or strategy. They are usually led by a fearmonger, the strongest and most fearsome of their ilk. Naturally, the fearmonger’s presence alone is enough to keep them in line. However, it’s not uncommon for most chaosmen to flee once their fearmonger falls. Realizing this fatal flaw in their “tactics”, fearmongers force their men forward first, then follow through while they’re tied up in combat.

Wounded Fury. While it has 10 hit points or fewer, the chaosman has advantage on attack rolls. In addition, it deals an extra 7 (2d6) damage to any target it hits with a melee attack.

Wounded Fury. While it has 10 hit points or fewer, the chaosman has advantage on attack rolls. In addition, it deals an extra 7 (2d6) damage to any target it hits with a melee attack.

Frightful Presence. The chaosman targets one creature it can see within 15 feet of it. The target must succeed on a DC 13 Wisdom check or become frightened until the end of its next turn. A target that succeeds on its saving throw or the effect ends for it is immune to this chaosman’s Frightful Presence for 24 hours.

These are the first two official creations for my collaborative effort with Justin David Russell, the Mega Dungeon The Secret of Forsaken Mountain. He said the castle has chaosmen. So I gave it chaosmen!

As we work through the megadelve, all sorts of neat things will be created along with it. You can probably expect a Chaos Cleric domain soon.