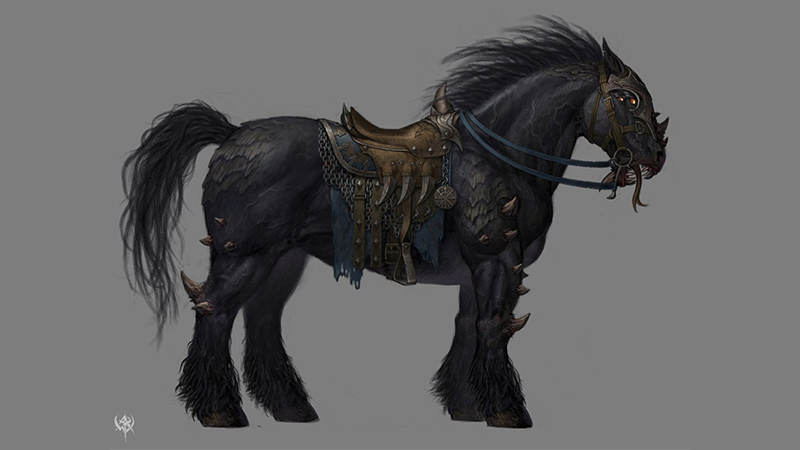 The chaosmen have had a tenuous relationship with traditional mounts. Unless the chaosman has a slave to tend to his horse, chances are he will let it die from starvation, thirst, or exhaustion. Or just murder it.

So thank the Gods of Chaos for the vrüniks. These fiendish steeds, while chaotic and inherently evil themselves, serve the vrüniks warlords well. They’re durable, dangerous, and quite frightening to behold.

A vrünik looks like a large, bulky black horse, with two sets of glowing red eyes on either side of its skull. Their teeth are jagged and capable of punching through steel.

Trampling Charge. If the vrünik moves at least 20 feet straight toward a creature and then hits it with a hooves attack on the same turn, that target must succeed on a DC 15 Strength saving throw or be knocked prone. If the target is prone, the vrünik can make another attack with its hooves against it as a bonus action.

Get ready for the Forsaken Mountain.

Each time you see me create something for probably the next couple months, it’s for the megadelve that I’m creating with Justin David Russell. Of course, feel free to use it in your campaigns as you see fit!

Learn more about our project by reading this introductory article: the Secret of Forsaken Mountain.