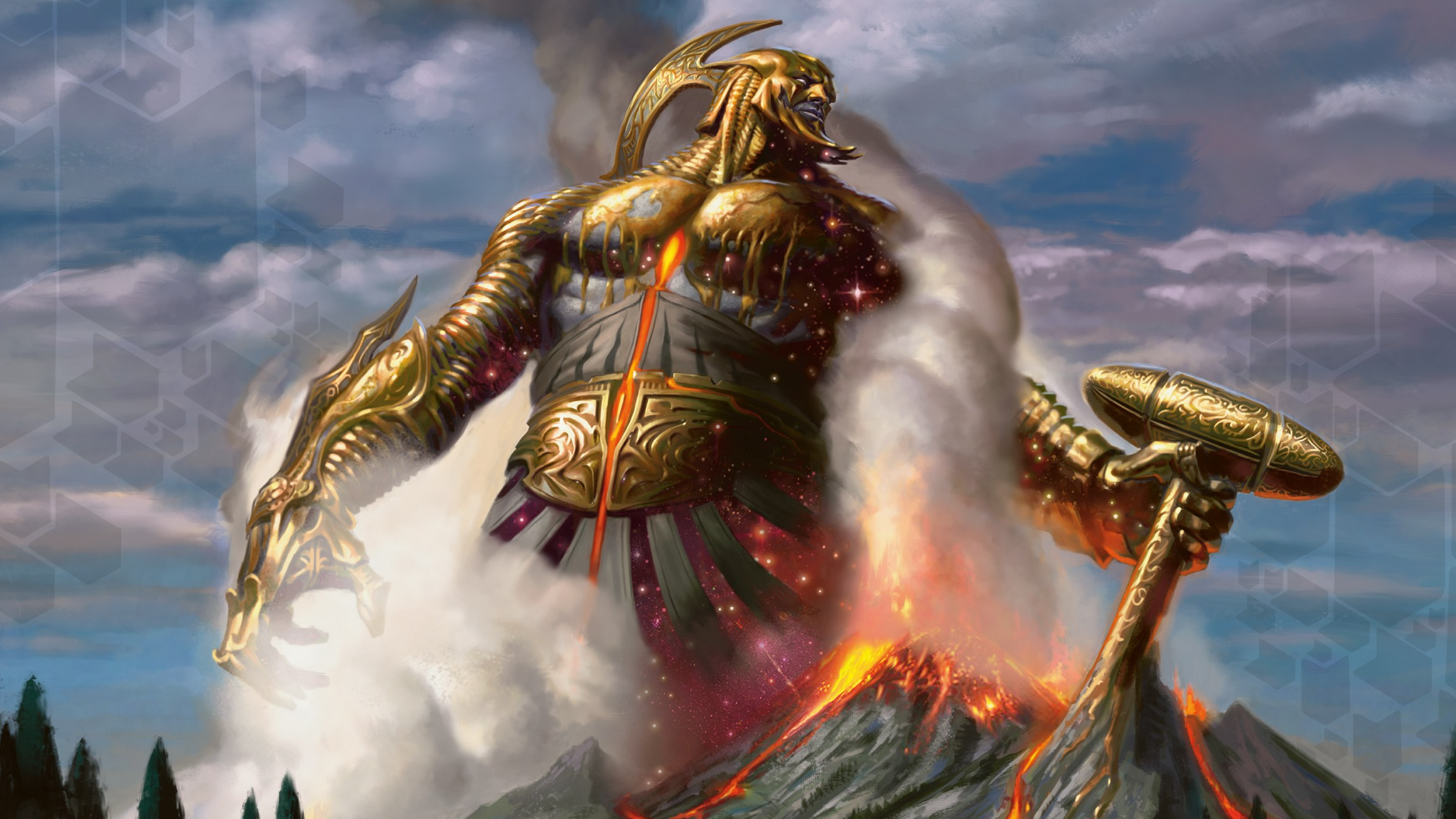 Moving along, now that I know the basic mechanics of the game–the core engine and player classes–that I’m developing for my Patrons over on Patreon, it’s time to decide on the divine domains. If this the first you’ve stumbled onto the Gods of Wandrossa ruleset, be sure to read up on the first pieces:

This was a fun one to make. I had to really think about the 4th level powers (those always seem to slow me down), but I think I got some pretty cool options there. The Forge god relies heavily on defensive powers and can create all kinds of cool constructs. Changing up the 14th level power, I thought it’d be cool if the forge god made a volcano erupt, a sort of middle finger to the other gods in a region. Oddly, I created that power before I found this perfect image (from MTG) of a forge god.

At 1st rank, a god gains the Godly Domain feature. The following Forge domain option is available to a god in the Gods of Wandrossa game.

The gods of the forge are patrons of artisans who work with metal, from a humble blacksmith who keeps a village in horseshoes and plow blades to the mighty elf artisan whose diamond-tipped arrows of mithral have felled demon lords. The gods of the forge teach that with patience and hard work, even the most intractable metal can be transformed from a lump of ore to a beautifully wrought object.

The Forge domain lets you choose from an expanded list of powers when you learn a divine power. The following powers are added to the divine power list for you.

Blessings of the Forge

When you choose this domain at 1st rank, whenever you take the Improve Settlement action to Improve Defenses, the settlement does not decrease its satisfaction. In addition, the wealth cost is reduced by 2 (minimum of 1).

Starting at 3rd level, your workshops drive more mortals to put their faith in you. You gain an additional 20 followers at the end of each year if a settlement that contains one of your temples contains a workshop, as well.

At 6th level, whenever another god declares a conflict in a settlement containing one of your temples, you can use your reaction to declare the oppose action against that conflict.

You decide whether or not the mine is home to evil or good creatures. If your masterwork mine is destroyed, you can’t rebuild it for 20 years. Once the mine is available again, you must use your daily action to rebuild it.

You can choose to have one of your chosen ones manage your mine. At your option, the iron golem can become second in command while your chosen one leads. Your chosen one adds its normal location bonuses to the mine (if any).

If you are destroyed or demoted to 9th level or lower, your masterwork mine turns to ruins.

At 14th level, as a show of your divine might, you cause a volcano to erupt. Select a region that does not already contain a volcano. Place a volcano in a mountain-hex that does not contain a settlement or location. Upon eruption, the volcano spews magma, ash, and poisonous gas decimating life within 18 miles (3 hexes) of it. Each settlement in the area reduces its population by 1,000. If this reduces a settlement’s population to 0, the settlement is destroyed and turns to ruins. Each location in the area reduces its defensive value by 3. If this reduces an location’s defensive value to 0, the location is destroyed and turns to ruins. While the volcano remains, it is active, and new settlements or locations cannot be placed within the volcano’s area of effect unless done so by a god whose might is higher than your own.

If you are destroyed or demoted to 13th level or lower, the volcano becomes dormant.

You bless the industry of a settlement with an improved bounty for a year. Choose a settlement. The amount of wealth the settlement creates that year increases by an amount equal to your might.

You create a new construct of CR 4 or lower. In addition, choose one settlement. That settlement earns 2 additional wealth at the end of each year for 5 years.

You create a new magic item of common or uncommon rarity. In addition, when you Assist/Oppose a conflict, you add/subtract an amount equal to 1 + your might bonus instead of just your might bonus for the next 5 years.

Select a CR 1 or lower beast, humanoid, giant, or monstrosity. You create a variant form of that creature that gains the following benefits:

At Higher Levels. When you use this power using a power slot of 6th-level or higher, you gain an additional 500 followers for each level of power slot you use.

Choose two settlements. You build a 1st-level temple in each settlement. If you already have a temple in either settlement, increase the temple’s level by 1. The normal settlement temple level restrictions apply.

Choose a settlement. Its wealth increases by 3.

Choose a region. Every settlement in the region increases its DV by 4 until the start of the next day.

At Higher Levels. When you use this power using a power slot of 5th-level or higher, the settlements’ DVs increase by an additional 1 point for each power slot used beyond 4th.

Implementation Time: 1 reaction, after you declare an Assist/Oppose or Conflict action

When you Assist/Oppose a conflict or declare a Conflict, you can use your reaction to add/subtract an additional 2 to the attack pool.

Higher Levels. When you use this power using a power slot of 2nd level or higher, you add/subtract an additional 1 to the attack pool for each slot beyond 1st.

Choose a settlement. Its population is reduced by an amount equal to 100 times your might bonus. If this reduces a settlement’s population to less than 100, it becomes 100 instead.