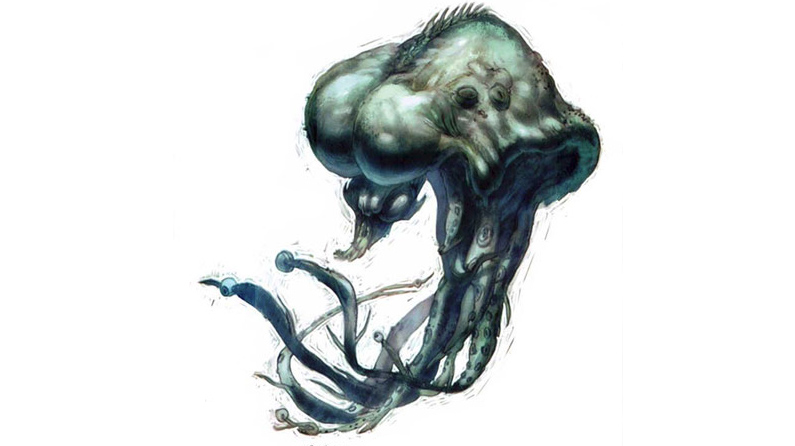 Hey hey! Sorry about no posts yesterday, but I wasn’t feeling so hot.

And today, I’m recreating one of the weirder monsters from 3.0/3.5, the ocularon.

From the 3rd edition Fiend Folio:

“The ocularon is a paranoid, bizarre creature that steals the sight of its foes. It looks like a sickly green jellyfish and pulses and ripples due to the tremendous amount of gas carried within it. Sometimes, a pocket of the gas just under the creature’s skin develops a leak, causing the gas to whistle as it slowly escapes.”

Oh, and the stolen eyeballs it rips out dangles from its barbed tendrils. Guh-ross.

Why recreate the ocularon for 5e?

My players have finally made it out of the Dyson Megadelve and they’re on the way to facing my big, bad evil guy, The Duke of Nightmares.

The Duke’s iron tower is in a pocket dimension known as the Demi-plane of Nightmares. Bordering the Region of Dreams and the Far Realm, this awful, swamp-like dimension is host to all sorts of horrible creatures. In fact, this is where “baby beholders” are created by their slumbering parents before they journey to the Prime Material.

Design notes for the 5e ocularon.

The ocularon was a 3rd edition Fiend Folio monster. So it’s stats have already been laid out. Now, it’s just a matter of adjusting those stats for the fifth edition, which usually isn’t too much trouble.

The third edition version of the ocularon was a CR 12 aberration. So I might tone it down a little. Plus, some of its abilities don’t translate completely to fifth edition rules, so I’ll need to tweak ’em to make it work. For example, I thought it was somewhat incongruous to have it create the eyeballs through arcane eye. Instead, I just made a separate statistic block for the eyeballs themselves.

Also, 3rd made their languages Common and Undercommon. I want mine to be an alien, so I’m going to give it Deep Speech.

Either way, this should be fun.

These monsters are available for you to use in your 5th edition Dungeons & Dragons campaigns. Just not commercially. And the art isn’t mine; it’s owned by Wizards of the Coast and borrowed!

Damage Resistances bludgeoning, piercing, and slashing from nonmagical attacks not made with silvered weapons

Death Throes. When the ocularon dies, it explodes in a burst of poisonous gas. Each creature within 20 feet of it must make a DC 15 Constitution saving throw, taking 10 (3d6) poison damage on a failed save and become poisoned, or half as much damage on a successful one and does not become poisoned.

Innate Spellcasting. The ocularon’s innate spellcasting ability is Intelligence (spell save DC 15). It can innately cast the following spells, requiring no components:

*The ocularon can only use its arcane eye and true seeling innate spellcasting abilities if it has eyes on its tendrils available to use as arcane eyes.

Multiattack. The ocularon makes three attacks with its tendrils.

Tendrils. Melee Weapon Attack: +8 to hit, reach 5 ft. one target. Hit: 11 (2d6 + 4) piercing damage plus 10 (3d6) poison damage. In addition, the target must make a DC 15 Constitution saving throw or become poisoned. If the target is a  creature, it is grappled (escape DC 15). Until this grapple ends, the target is restrained, and the ocularon can’t use its tendrils on another target.

Steal Eyes. The ocularon makes one tendril attack against a Large or smaller creature is its grappling. If the attack hits, the target takes the tendril’s damage, and the target must make a successful DC 15 Constitution check or become blinded.

Death Burst. The animated eye explodes when it drops to 0 hit points. Each creature within 20 feet of it must make a DC 15 Constitution saving throw, taking 10 (3d6) poison damage on a failed save and become poisoned, or half as much damage on a successful one and does not become poisoned.

Explode. Melee Weapon Attack: +6 to hit, reach 5 ft., one target. Hit: the animated eyeball impacts on the target, the eyeball’s hit points are reduced to 0, and it explodes. Each creature within 20 feet of it must make a DC 15 Constitution saving throw, taking 10 (3d6) poison damage on a failed save and become poisoned, or half as much damage on a successful one and does not become poisoned.

Anyways, these should definitely strike terror into the hearts of your players.

Personally, I love stuff like this. Mostly because most people have never ever come across one while playing D&D, therefore it’s tough to meta what they’ll do.

Catch you next time when I create more horrible monsters to torment my players with!