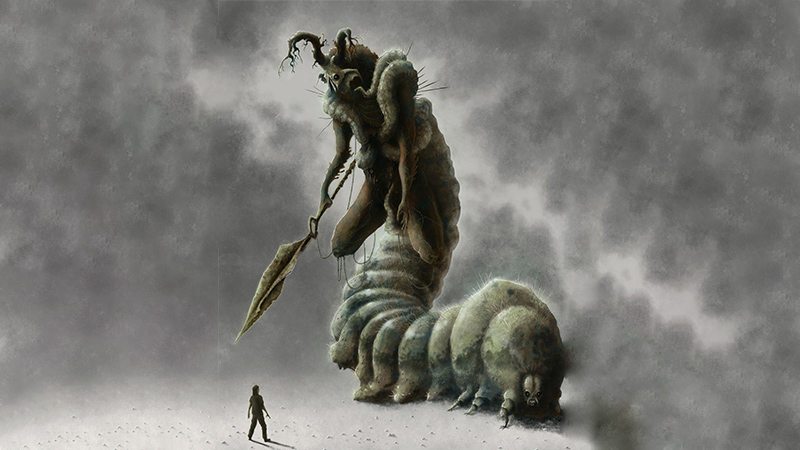 A few weeks back, I put out feelers on Instagram for stuff people wanted to see statted for fifth edition Dungeons & Dragons. I wasn’t disappointed with what came back. Since then, I’ve gotten to create all sorts of cool bads for D&D including Jafar from Aladdin, the monsters from A Quiet Place, and even an anti-murder-hobo.

However, by far, one of the strangest requests I got came from Instagram follower @bryonscore. Here’s what he requested:

King Midas, a plain sea turtle, a sentient fence that gets smaller around you the longer you aren’t paying attention to it, a caterpillar but it’s really muscular, two orcs conjoined by the skin on their backs, an eyeball floating shadow the shape of a human male, just grass, twelve disembodied heads in a pile, I’ll be back with more.

Perhaps Mr. Score was being facetious in his request. Little did he know I am absolutely insane and will gladly turn all these things into challenges for Dungeons & Dragons.

As funny as these are, there’s actually quite a few similar creatures found in the fifth edition monster books.

For example, King Midas is a noble that can petrify creatures when he touches them.

I just made a floating eyeball for another entry. All I have to do is nerf some of its abilities.

The sea turtle is a beast, and those are easy enough to make. Just had to do some research on real-world sea turtles. I based mine on the leatherback.

A muscular caterpillar is interesting. I tried finding an image of one and came upon this huge caterpillar man with a spear (see below). I thought that’d make a cool race, so that’s what I created: kampians (caterpillar) folk.

The orc twins are… well, orcs. Just stuck together. I’ll need to create some special features, but otherwise, they should be relatively normal orcs.

Shadow the shape of a human male is a shadow. Nothing needed for that. You can find shadows on page 269 of the Monsters Manual.

For the other listings, I’ll need a little more creativity on my part.

The sentient fence will make for a good mimic-like creature. It totally reminds me of something that’d be found on the Harpells estate in Longsaddle.

Just grass? Well, there’s a Stephen King story from Creepshow about “just grass” that spreads when you touch it. So I can make that something horrible.

And 12 disembodied heads in a pile? Yo, what y’all think about a pile of spellcasters that act as one? Terrifying.

King Midas’ Touch. Any nonmagical item or creature that King Midas touches turns to gold. If the target is a creature, it must make a DC 13 Constitution saving throw. On a failed save, the creature magically begins to turn to gold and is restrained. It must repeat the saving throw at the end of its next turn. On a success, the effect ends. On a failure, the creature is petrified until freed by the greater restoration spell or other magic.

Golden Touch. Melee Weapon Attack: +3 to hit, reach 5 ft., one target. Hit: 3 (1d4 + 1) bludgeoning damage, and the target must succeed on a DC 13 saving throw against being magically petrified. On a failed save, the creature begins to turn to gold and is restrained. It must repeat the saving throw at the end of its next turn. On a success, the effect ends. On a failure, the creature is petrified until freed by the greater restoration spell or other magic.

Hold Breath. The sea turtle can hold its breath for 5 hours.

Shapechanger. The sentient fence can use its action to polymorph into a fence or back into its true, amorphous form. Its statistics are the same in each form. Any equipment it is wearing or carrying isn’t transformed. It reverts to its true form if it dies.

Splinters (Fence Form Only). The fence is covered in sharp splinters. At the start of each of its turns, the fence deals 5 (1d10) piercing damage to any creature grappling it or vice versa. It can turn this ability on and off as a free action.

False Appearance (Fence Form Only). While the fence remains motionless, it is indistinguishable from an ordinary fence. Creatures can enter the same space as the fence.

Constrict. The fence closes around any creatures within its space. Each creature in the fence’s space must succeed on a DC 15 Dexterity saving throw or take 14 (2d8 + 5) bludgeoning damage plus 5 (1d10) piercing damage and become grappled by the fence (escape DC 14). Until this grapple ends, the creature is restrained. The fence can constrict up to four targets at a time.

Spider Climb. The kampian can climb difficult surfaces, including upside down on ceilings, without needing to make an ability check.

Sting. Melee Weapon Attack: +6 to hit, reach 10 ft., one target. Hit: 17 (3d8 + 4) piercing damage plus 7 (2d6 poison damage), and the target must succeed on a DC 15 Constitution saving throw or be poisoned for 1 minute. Until this poison ends, the target is paralyzed. The target can repeat the saving throw at the end of each of its turns, ending the poison on itself on a success.

Urgoth the Unyielding and Lefty

Urgoth the Unyielding is one of the greatest orc warriors that ever lived. Which is impressive, when one considers that his twin brother, Lefty is conjoined to Urgoth’s back by a thick piece of skin.

Urgoth is an orc war chief and Lefty is an orc Eye of Gruumsh. Both brothers have the following traits:

Conjoined Twins. Urgoth and Lefty share the same space at all times, as well as the same initiative count, and they move as one. They have advantage on Wisdom (Perception) checks and on saving throws against being blinded, charmed, deafened, stunned, and knocked unconscious. In addition, they cannot be flanked.

Wakeful. If Lefty is asleep, Urgoth is awake and vice versa.

Just grass feeds on evil emotions. A patch of just grass typically covers a 10-foot square. Any evil creature the steps on or touches just grass must succeed on a DC 15 Constitution saving throw, or be cursed with just grass growth.  The cursed target can’t regain hit points, and its hit point maximum decreases by 10 (3d6) for every 24 hours that elapse. If the curse reduces the target’s hit point maximum to 0, the target dies, and its body turns into a patch of just grass. In addition, if the cursed creature touches another evil creature, that creature must also make a DC 15 Constitution save, or be cursed with just grass growth, too. The curse lasts until removed by the remove curse spell or other magic, or the evil creature performs an action the Just Grass considers good. The nature of just grass can be correctly identified with a successful DC 15 Intelligence (Nature) check.

12 Disembodied Heads in a Pile

Languages all languages it knew in life

Magic Resistance. The pile of heads has advantage on saving throws against spells and other magical effects.

Spell Babble. The pile of heads casts three of its at-will spells.

Hopefully, this adds a whole lot of random to your Dungeons & Dragons fifth edition campaigns. Feel free to use anything here. Just not commercially. And the art isn’t mine: borrowed!

Next up on my list of stuff to stat, I’ve got the infamous Gandalf the Gray/White and Saruman the Many-Colored. No pressure, right?

If you aren’t already, be sure to follow along via email by signing up with the opt-in box on the right side or down in the footer.

1 thought on “Stat Anything: 9 Random Things for 5e Dungeons & Dragons”