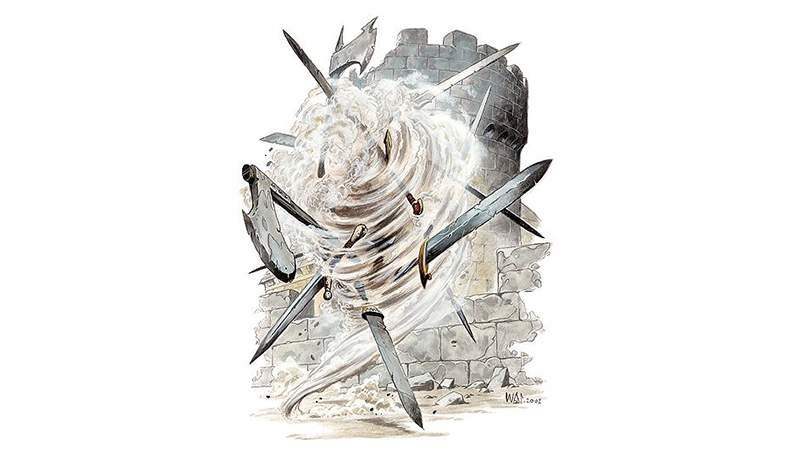 Also called sword spirits, a ragewind is the embodied wrath of dead warriors who perished in useless battles. They are usually found in the most volatile and violent of the Outer Planes, but a few sometimes escape to wander the Material Plane as well. On rare occasions, ragewinds form on the Material Plane at the sites of massive battles with heavy casualties.

A ragewind normally appears as a churning whirlwind, within which dozens of suspended weapons dance and clash. Its true form is vaguely humanoid, a semisolid cloud of white or gray fog. It has no treasure other than the weapons it carries.

Air Form. The ragewind can enter a hostile creature’s space and stop there. It can move through a space as narrow as 1 inch wide without squeezing. The first time it enters a creature’s space on a turn or if a creature ends its turn in the same space as the ragewind, that creature must make a DC 18 Dexterity check, taking 27 (6d8) slashing damage on a failed save, or half as much damage on a successful one.

Invisibility. The ragewind magically turns invisible until it attacks, enters another creature’s space, casts a spell, or uses its Whirlwind. Any equipment the ragewind wears or carries is not invisible with it.