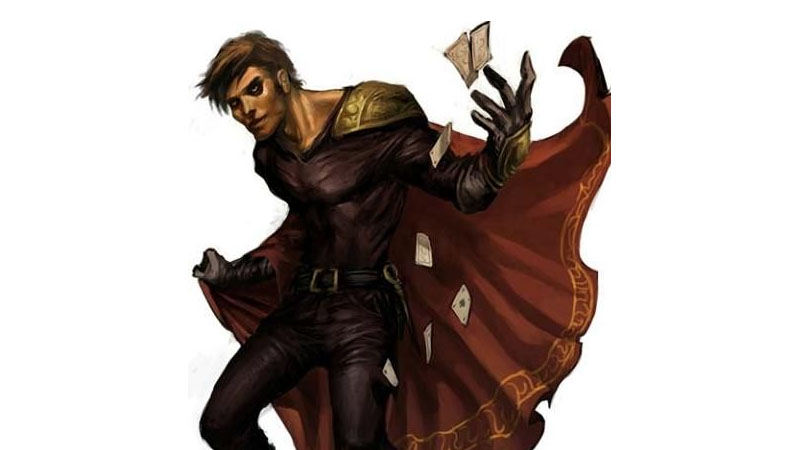 This one was a pain in the butt to create. Not because I didn’t enjoy the concept! The concept is cool. But I couldn’t figure out a mechanic that just “made sense” for the flavor. Finally, after a few days of deliberation, I decided on a pretty cool mechanic.

Here’s how I see this subclass working:

Once I got the idea to “weaponize” inspiration, the rest of the subclass came together pretty quickly.

The Place Your Bets power is the engine that drives the whole thing and comes chock full of flavor. Some might complain that a class that ties in inspiration like that kills the idea behind inspiration. My argument is that it’s a gambler. It’s gambling. Therefore, it’s doing what it’s supposed to do. Boom. Inspiration. The only cap I decided to put on it was that it wasn’t “inspiration” but a “gambler die.” It works similar to inspiration, but it can only be used to fuel the gambler’s powers and attack rolls and it can’t give it away.

From there, the rest of the subclass uses gambler’s die for various things. The secondary 3rd level power is more of a “roleplaying” power, kinda like mini-downtime that helps fill the petty cash box for the party. At the tiers listed, the gp amounts shouldn’t be too broken since they’re waaay less than what you’re supposed to get at those levels while adventuring.

At 9th, you can read bluffs. Again, this one is a little outside of combat, but it’s a pretty useful power. Plus, it ties in another use for the gambler’s die, effectively giving you lie detection powers.

13th level’s power flipped the way inspirations work. Instead of betting the gambler’s die before the die roll is made, you can use it after in one of two ways. First, to completely reroll. Second, to add +5. That way, if you roll like shite, you can totally reroll the die and increase your chances of success. And second, if you feel like you’re damn close to a success and need the extra bump, you can add a late-in-the-game +5 to the roll.

Finally, the 17th level power sort of duplicates what inquisitive rogues do as their capstone, except it lets the gambler use the gambler’s die to get the bonus to attack rolls. Because you have to use your place your bets ability (which should, in theory, succeed 60% of the time) to get this extra damage, and that requires a reaction, and you have to find a different way to get the advantage on the attack, I bumped it up from the 3d6 to 5d6 to account for the use of extra action economy.

At 3rd level, a rogue gains the Roguish Archetype feature. The following Gambler option is available to a rogue, in addition to those normally offered.

Believe it or not, even the Gods of Luck and Fortune have chosen ones that they imbue with certain powers. Of course, being a god of luck doesn’t mean just handing it over to the chosen one willy nilly. No, the chosen one must prove that they are worthy of such a mantle by demonstrating their natural affinity to bending the curve of probability. These roguish archetypes are known as gamblers, and they live life on the edge. Betting on (and against!) allies, foes, and events all around them.

When you select this roguish archetype at 3rd level, before you or any of your allies make an attack roll, you can use your reaction to place a bet. You must tell the GM before the roll is made whether or not the roll will succeed or fail. After the attack roll is made, if your guess was correct you are automatically rewarded a gambler’s die, which acts like inspiration. If your guess was incorrect nothing happens. You can only have one gambler’s die at a time–you can’t stockpile multiple “gambler’s dice” for later use.

At 3rd level, you are excellent at making money while traveling. As long as you are in a somewhat civilized area that’s predominantly populated by humanoids with an average Intelligence scores of 8 or greater, you are carrying at least 10 gp, and have a gambler’s die available, you can gamble to earn extra income. To do so, you must spend eight hours of downtime gambling, at the end of which you expend your gambler’s die. You earn 10 gp from your efforts. This amount increases to 100gp at 5th level, then 1,000 gp at 11th level.

Starting at 9th level, you have an incredible sense for when people are lying to you. You have advantage on all Wisdom (Insight) checks to detect lies. In addition, you can expend your gambler’s die when you wish to detect a lie. If you do, you automatically know what you’re hearing is a lie or not.

At 13th level, you possess supernatural luck. After you make an attack roll, ability check, or saving throw, you can expend your gambler’s die to do one of the following:

You must choose to use your gambler’s die in this way after you make the roll, but before the GM tells you whether or not you succeeded.

At 17th level, your natural luck assists you in combat. Whenever you hit a creature with your Sneak Attack, you can expend your gambler’s die to increase your Sneak Attack damage for that attack against that creature by 5d6.

Next up: Time Sorcerers