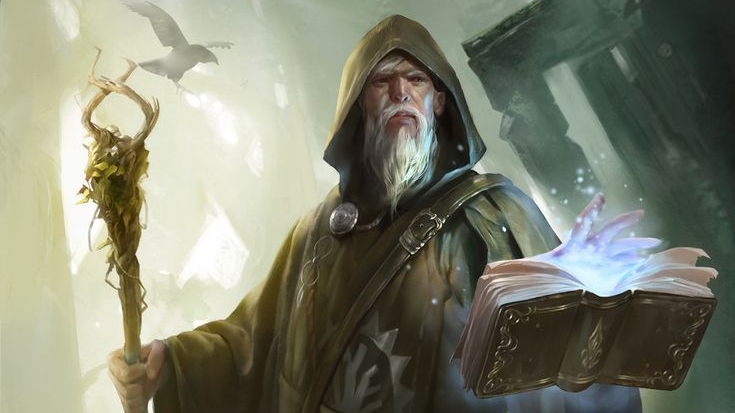 This bonus entry is part of the Dungeon.Dude Promotional Campaign on Instagram. Together, the Instagram D&D Community helped Dungeon.Dude, a hard-working artist, get over 2,100 followers! Outstanding job, folks!

This one came in as a request from one of my patrons. Here’s what Romain asked:

… a Universalist Wizard sub-class (or class, if you think it’s best). Not terribly original, but that’s what I like.

I’ve toyed with it myself and made Arcane Traditions alike to the old Pathfinder wizard, with a power item, or a book of extra spells and rituals, metamagics, arcane secrets… (not all at once, of course). But I’d like your take on it, if you can find the time.

I liked where you were going with the Archivist class and domain, I think there’s potential for something arcane and not divine there. I’d particularly like it if you could give the wizard more spell slots or prepared spells per day and keep it balanced (the sorcerer currently has the most spells per day if you count the versatile spell points)

Personally, I think that’s a hell of an idea. So far, the three arcane classes work like this:

I think what I’d like to do with Romain’s request is take the wizard and make it a true wizard, one that’s not tied to any particular school. Jack of all trades, master of none, so to speak.

It’s then simply becomes a matter of figuring out what role the wizard has yet to fill. Let’s look at the other arcane traditions real quick:

So what’s left for a generalist to do? Let’s look at Romain’s suggestions:

I think I’ve got enough to work on. Let’s dive in!

Kind of an interesting build here with a lot of abilities that I sorta wonder why they’ve never been added before.

At 2nd level, I tossed in a couple bonus cantrips and expertise with Arcana. This’ll make the wizard a pretty tough counterspell/dispel magic tosser, but I’m fine with that.

The big weirdo power I gave this wizard was the ability to craft its own arcane focus. This little tool gives it all sorts of nifty, cantrip’ish powers. At 2nd, the wizard is limited by its Intelligence modifier on a lot of the abilities. And each are roughly in line (even a little weaker) with what the arcane traditions at the same level can do with their powers. The most powerful being the conjuration power of summoning a ranger-like companion. But this costs 9 charges, which, by the time the wizard gets it should be 5th-level. In addition, the CR is nerfed and it only lasts one minute. I’m sure there’ll be those who have thoughts about the balance of power, but hey… I wanted to make this subclass interesting, if not totally controversial.

The remainder of the universalist’s abilities are a little weaker than normal to account for its powerful advanced focus. At 6th you get a bonus 1st-level spell slot, which shouldn’t break the bank too much. 10th lets you swap one spell of a certain level with another. And 14th lets you boost a spell to one level higher than the slot used.

All of it seems to go with the flavor of a “universalist” class, a wizard that’s an expert at magic and able to switch between schools quickly.

At 2nd level, a wizard gains the Arcane Tradition feature. The following Universalist option is available to a wizard, in addition to those normally offered.

All of the schools of magic produce such wonderment and intrigue it’s hard for you to select just one to specialize in. For this reason, you’ve decided to spread out your interests to all of the arcane traditions, dabbling a little in each. While you may not have the mastery of a specialist wizard, your wide range of arcane knowledge gives you greater flexibility than others who practice the mystic arts.

At 2nd level, you learn two wizard cantrips of your choice. These cantrips do not count towards the number of cantrips you know. You also gain proficiency in the Arcana skill. If you are already proficient in Arcana, you may double your proficiency bonus when you make ability checks with it.

Starting at 2nd level, you can spend 8 hours creating your own arcane focus–an orb, a crystal, a rod, a specially constructed staff, a wand-like length of wood, or some similar item–designed to channel the power of your magic. In addition to acting as a spellcasting focus, the object has a number of charges equal to your wizard level plus your Intelligence modifier (minimum of one). While holding it, you can expend 1 or more charges to use one of the following benefits. It regains all expended charges daily at dawn. If you expend the last charge, roll a d20. On a 20, the focus becomes a nonmagical item and you will have to spend another 8 hours recharging it.

Death Sight. You can use your action to expend 3 charges to target one dead creature that you can see within 10 feet of you. The dead creature must have had working eyes in life in order for you to target it (but it can be a skull). While the corpse is within 100 feet of you, as an action you can see through the corpse’s eyes and hear what it hears until the start of your next turn. During this time, you are deaf and blind with regard to your own senses. The effect ends after 1 hour, when you use this benefit again, or if the corpse is destroyed.

Empower. Once per turn, whenever you cast a wizard evocation spell, you can expend 2 charges to add your Intelligence modifier to one damage roll of the spell.

Forward Sight. You can use your action to expend 5 charges. For 1 minute, you make initiative rolls with advantage.

Friendliness. You can use your action to expend 3 charges. For 1 minute, you make all Charisma ability checks with advantage.

Invisible Object. You can use your action to expend 3 charges to turn a nonmagical object invisible. The object must be held in your hand or carried by you. This object can be no larger than 3 feet on a side and weigh no more than 10 pounds. The object remains invisible for 1 hour, when you use this benefit again, or if you stop carrying it. In addition, if another creature touches the object, it reappears.

Protect. If you are hit by an attack, you can use your reaction to expend 1 or more of its charges to reduce the damage taken by an amount equal to the number of charges spent.

Summon Beast. You can use your action to expend 9 charges in order to summon a fey spirit that takes the form of a beast which appears in an unoccupied space that you can see within 30 feet of you. Choose a beast that is no larger than Medium and that has a challenge rating of 1/8 or lower. Add your Intelligence modifier to the beast’s AC, attack rolls, and damage rolls, as well as to any saving throws and skills it is proficient in. Its hit point maximum equals the hit point number in its stat block or four times your wizard level, whichever is higher. The beast obeys your commands as best as it can. It takes its turn on your initiative, though it doesn’t take an action unless you command it to. On your turn, you can verbally command the beast where to move (no action required by you). And you can use your action to verbally command it to take the Attack, Dash, Disengage, Dodge, or Help action. The beast never requires your command to use its reaction, such as when making an opportunity attack. If the beast drops to 0 hit points, it disappears, leaving behind no physical form. Otherwise, the beast remains for up to 1 minute, or until your concentration is broken (as if concentrating on a spell) or you use your bonus action to dismiss it. You may only summon one beast at a time using this benefit.

Useful Thing. You can use your action to expend 5 charges to target an object that you can see within 10 feet of you. This object can be no smaller than 6 inches and no larger than 3 feet on a side, and it must weigh between 5 and 10 pounds. The object changes into one of the following objects of your choice: 10 feet of chain, 50 feet of hemp rope, a bucket, a crowbar, a miner’s pick, a shovel, or a sledgehammer. The object is visibly magical, radiating a dim light out to 5 feet. The object returns to its true form after 1 hour, when you use this benefit again, or if takes or deals any damage.

At 6th level, you gain one extra 1st-level spell slot.

At 10th level, you can swap one 5th level or lower wizard spell that you have prepared for another wizard spell of the same level that is in your spellbook. You cannot swap one of your signature spells using this feature.

Next up: Chronomancy Arcane Tradition (for real this time)