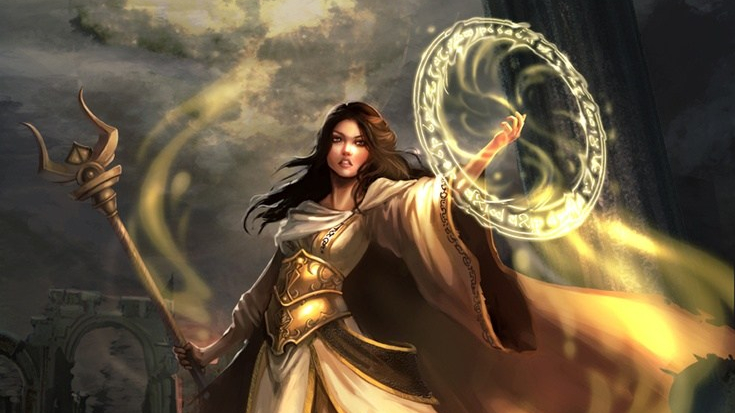 This final entry is part of the Dungeon.Dude Promotional Campaign on Instagram. Together, the Instagram D&D Community helped Dungeon.Dude, a hard-working artist, get over 2,100 followers! Outstanding job, folks!

This is it! The final class for this subclass series. It’s been a ton of fun and we’re going out with a bang with Chronomancers!

Okay, yes, I know this one has been done to death. And the sorcerer time bender already kinda scratches that itch. But I figured that wizards should get in on the fun, too.

As I noted in the Universalist subclass, wizards tend to be kinda… eh… on their subclasses. A lot of their synergy stems from casting spells of a certain type. The only subclass that really breaks the mold is the War Mage from Xanathar’s.

When designing this class, I wanted it to be a little less “Dr. Strange Time Stone” ish and more “time is neat and I want to study it and command it.”

I also see this subclass as a duelist. Its job is to take care of the biggest threats while the team mows down the little guys. So here’s what I propose:

Let’s see what I come up with.

Boy oh boy, are there some controversial elements to this build. Alas, I feel that it not only fits the flavor perfectly but the idea I had for the class to start with.

The job of the Chronomancer is to distract the really big targets, hence its slowing wave ability at first level. This works identically to enchantment’s power at the same level, but it exchanges range for potency. The slowing wave only cuts movements in half and eats up some of the creature’s action economy. At most, it’ll stop a goblin from using its Nimble Escape feature. Plus, it’s a big drain on your own action economy. However, the ability to stop a creature far up on the battlefield can be extremely useful.

At 6th, you get your first defensive power which lets you have a permanent “mini-shield” power that works a little like haste. You get to use your reaction whenever you want to throw up a +2 to AC and Dex saves.

At 10th, you get a mini Time Stop. This one I’m sure will have some controversy, but it should be nerfed enough to not shake things up too bad. Basically, you get a second turn to move out of the way, throw up some protection, or do one thing to protect yourself before your real turn. If I make any adjustment to it, it’s probably the bonus to initiative (might shrink it down to +5 so it’s effectively advantage).

Finally, temporal stasis is the big whacky power. Basically, if you drop to 0 (which happens frequently as a wizard) you can enter a stasis mode which makes you nigh invulnerable to attacks. More than anything, it’s there to annoy the shit out of whatever monster is trying to kill you so it changes targets. To balance out all the safety measures, it lasts for 1 minute unless it’s dispelled. That means your buddies can’t help you until combat is over or the 1 minute is up. This is by design. If you use this ability, you’re basically saying, “Don’t worry about me guys, go kill the big bad thing.”

At 2nd level, a wizard gains the Arcane Tradition feature. The following Chronomancer option is available to a wizard, in addition to those normally offered.

Time. Some scholars believe it to be the ninth arcane school. Others theorize that it is the force that binds all magic and life. Whatever it is, as a chronomancer, it is your mission to understand it better. And through intense research, you have unlocked the secrets of temporal magic which you employ in your spellcraft.

Starting when you select this arcane tradition at 2nd level, you have limited control over temporal energy. As an action, choose one target that you can see within 60 feet of you. The target must succeed on a Wisdom saving throw or become magically slowed until the end of your next turn as if under the effects of the slow spell.

On subsequent turns, you can use your action to maintain this effect, extending its duration until the end of your next turn. However, the effect ends if you and the creature move further than 60 feet apart from each other or if the creature takes damage.

Once the effect ends, or if the creature succeeds on its initial saving throw against this effect, you can’t use this feature on that creature again until you finish a long rest.

Beginning at 6th level, when a creature you can see within 30 feet of you targets you for an attack, you can use your reaction to temporarily speed yourself up. Until the start of your next turn, you have a +2 bonus to your AC and Dexterity saving throws including against the triggering attack.

At 10th level, you can briefly stop time to prepare yourself against threats. On the first round of a combat, you can take two turns. You take your first turn at your normal initiative plus 10, and your second turn at your normal initiative. On your first turn, no time passes for other creatures. You can use actions and move as normal except that your speed is halved and you can either take an action or a bonus action, not both. In addition, you cannot use any action that would affect a creature other than you or an object being worn or carried by someone other than you. You can use actions and move as normal on your second turn.

At 14th level, you can use temporal energy to protect yourself when you are vulnerable. When you are reduced to 0 hit points but not killed outright, you can use your reaction to enter temporal stasis just before you fall unconscious, instantly freezing in place. While in temporal stasis the passage of time does not affect you nor does gravity, and you are not required to make death saving throws at the start of your turn.

In addition, you are surrounded by a semi-transparent, shimmering, blue shell. The shell has an AC of 19 and 20 hp. It is immune to poison and psychic damage, and it is resistant to all other forms of damage except for radiant. Any creature that hits your stasis shell with a melee attack must make a Constitution saving throw or take force damage equal to half your wizard level. While within your stasis shell, you are extremely difficult to move. A creature can use an action to make a DC 30 Strength check, moving you 10 feet on a success.

Your stasis shell remains for 1 minute, until it is destroyed, or until a creature uses dispel magic to dismiss it as if dismissing a 5th-level spell. Once the shell disappears, you must make death saving throws at the start of your next turn again as normal.

Art by Wheel of Time RPG.